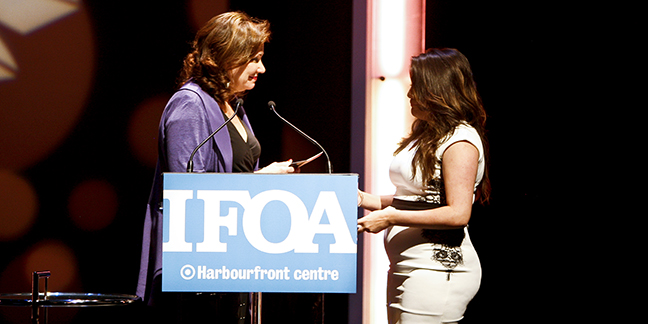 TORONTO – (Oct. 21, 2014) – Saudi Arabian blogger Raif Badawi will receive the 2014 One Humanity Award at PEN Canada’s annual benefit on the opening night of the 35th International Festival of Authors on October 23.

Introduced in 2006, the award, valued at $5,000 is given to a writer whose work “transcends the boundaries of national divides and inspires connections across cultures.” This year the award recognizes Mr. Badawi, a founder of the progressive online forum Liberal Saudi Network, as an emblematic case for the right to freedom of expression in Saudi Arabia.

The award will be presented in absentia since Mr. Badawi is currently serving a 10-year prison sentence for charges brought under Saudi Arabia’s Anti-Cybercrime Law, including “liberal thought,” and “insulting Islam.” In addition to his prison term, Mr. Badawi was fined almost $300,000 and sentenced to 1,000 lashes. Badawi, who suffers from diabetes, is reported to be in poor health.

On being notified that Mr. Badawi had been awarded the prize, his wife Ensaf Haidar quoted a line from his Twitter feed: “We want life for those who wish death to us; and we want rationality for those who want ignorance for us.”

PEN Canada adopted Raif Badawi as an Honorary Member in September 2014, and nominated him for the 2014 International Publishers Association’s Freedom to Publish Prize. Mr. Badawi’s wife and three children live in Canada.

The One Humanity Award

Raif Badawi is the eighth recipient of the One Humanity Award. In 2006, the inaugural prize was given to Chinese journalist Jiang Weiping. Other winners include Burmese poet and activist Zargana, Mexican activist Lydia Cacho, Iranian human rights lawyer Nasrin Sotoudeh, and the Vietnamese blogger Dieu Cay. The One Humanity Award is funded by a donation from PEN Canada patron Florence Minz.

Raif Badawi was arrested in Jeddah on June 17, 2012 after organizing a conference to mark a “day of liberalism.” On July 29, 2013, a court in Jeddah sentenced Badawi to seven years and three months in prison and 600 lashes after he was convicted under Saudi Arabia’s Anti-Cybercrime Law of “founding a liberal website,” “adopting liberal thought” and for “insulting Islam.” The online forum, Liberal Saudi Network – created to foster political and social debate in Saudi Arabia – was ordered closed by the judge.

According to reports, at his appeal Badawi’s lawyer cited procedural and evidential reasons why the conviction should be overturned and Badawi freed. In December 2013, the Court of Appeal reportedly reversed the District Court in Jeddah’s ruling, and ordered a review by another court.

On May 7, 2014, Jeddah’s Criminal Court sentenced Badawi to 10 years in prison, 1,000 lashes and a fine of 1 million Saudi riyals (approx. CAD$290,000) on charges of “insulting Islam” and “founding a liberal website.” According to PEN’s information, when Badawi appeared in court to collect a written account of the verdict on May 28, he discovered the insertion of two additional penalties: a 10-year travel ban and 10-year ban from participating in visual, electronic and written media, both to be applied following his release.

According to the Centre For Inquiry (CFI), in a post dated September 17, 2014, the Saudi appeals court in Mecca has confirmed the sentence against Badawi, and stated that the lashes will be administered 50 at a time, in public, every week after Friday Prayers.

PEN International is also protesting the arrest of Badawi’s lawyer, Waleed Abu Al-Khair, on April 15, 2014. Waleed Abu Al-Khair is a lawyer, human rights activist, and founding member of the Monitor of Human Rights in Saudi Arabia. On February 4, 2014, the Court of Appeal confirmed a three-month sentence against Abu Al-Khair, imposed after he had been convicted of contempt of the judiciary.

Under Article 19 of the Universal Declaration of Human Rights, “everyone has the right to freedom of opinion and expression; this right includes freedom to hold opinions without interference and to seek, receive and impart information and ideas through any media and regardless of frontiers.” Criminalization of the peaceful criticism of public officials and institutions violates international human rights law. Corporal punishment such as flogging also violates the absolute prohibition under international law of all forms of torture or other cruel, inhuman, or degrading treatment or punishment.

PEN Canada is a nonpartisan organization of writers that works with others to defend freedom of expression as a basic human right at home and abroad. PEN Canada promotes literature, fights censorship, helps free persecuted writers from prison, and assists writers living in exile in Canada. PEN Canada is the Canadian centre of PEN International, a community of writers that operates on five continents and in over 100 countries.