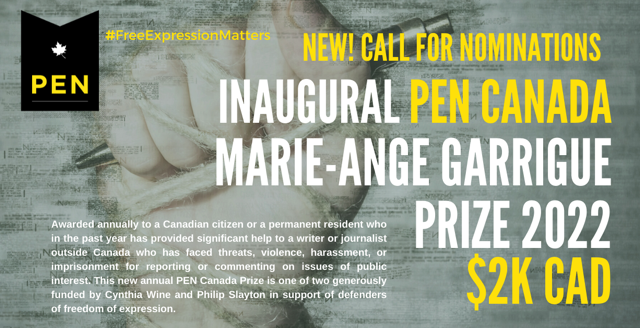 Calling all defenders of writers in peril

This prize is awarded annually to a Canadian citizen or permanent resident who in the past year has provided significant help to a writer or journalist outside Canada who has faced threats, violence, harassment, or imprisonment for reporting or commenting on issues of public interest. The value of the prize is $2000. This is the inaugural year of the prize.

The prize honours the memory of Marie-Ange Garrigue, a citizen of Canada and France, who practiced law in Canada for many years and died in France in January 2022. She had a deep commitment to independent opinion fearlessly expressed. This is the second PEN prize funded by Cynthia Wine and Philip Slayton in support of defenders of freedom of expression.

Nominees may be anyone, including an organization, who has demonstrably rendered assistance, through personal action, direct aid, advocacy, mobilization of help, funding, or via intervention with governments or third parties.

Nominations for this year’s award will be open to the public until midnight on Friday, May 20, 2022. All are invited to suggest a name of a person or organization that fits the award criteria.

Please include a brief biography of the nominee (or a link to one online), and a description of what the nominee has done on behalf of a writer or journalist outside Canada. Nominations must include specific examples of actions that the nominee has taken on behalf of such a journalist or writer, with supporting details and links. Details of the circumstances faced by the journalist or writer and their experience of abuse for speaking out on matters of public interest, must also be included. This can also include links to information online.