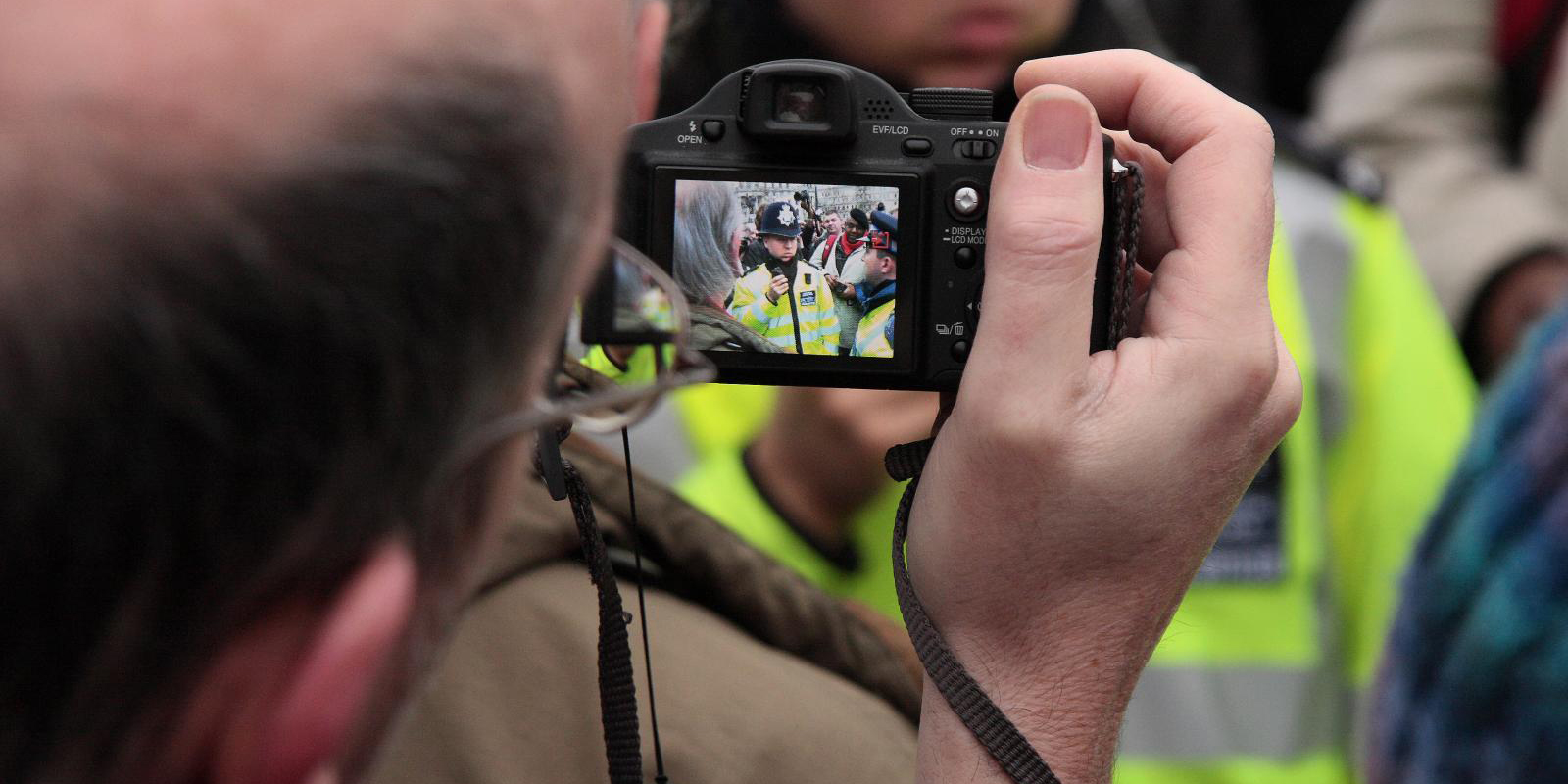 Pocket Guide
A handy guide that you can print or store on your smartphone.
card-sized        one-page

The June 2, 2013 arrest of Toronto Star photographer Alex Consiglio for trespassing in a Toronto railway station is the latest in a series of events that has PEN Canada’s National Affairs Committee concerned about the interpretation of certain Charter rights pertaining to public photography and filming.

In particular, we wish to state that it is not a criminal offence for individuals to photograph or film police officers as they go about their duties, and that police officers are not allowed to confiscate a person’s camera or recording equipment (including phones), force them to delete images, or otherwise prevent them from taking photographs or filming in public places. We also wish to clarify the law when it comes to taking pictures or filming on private property that is open to the public. People are welcome to take pictures or film in malls, transportation centres, and the like, unless posted signs specifically prohibit it, or until they are requested to desist by a representative of the owners of the property.  In such an instance, though the owners or their representatives (such as a security guard) are within their right to request a halt to any further photographic activities, they have no legal right to force the deletion or destruction of photos that have already been taken.  The publication of these photos is a separate issue and may be affected by other applicable laws.

We are especially concerned about the way recent trends in enforcement of non-existent prohibitions on photography and filming are affecting members of the press.

At no time, and under no circumstances, is anyone in Canada subject to arrest for the simple act of taking a photograph or filming

This document is not intended to be an exhaustive examination of all laws as they pertain to photography and filming. The issue is complicated and depends to some extent on laws that vary from province to province and municipality to municipality.

Subject to certain very limited constraints, it is not a crime in Canada for anyone to do any of the following things, and it is a violation of their Charter rights to prevent anyone from doing so:

At no time, and under no circumstances, is anyone in Canada subject to arrest for the simple act of taking a photograph or filming, although he or she can be arrested if he or she is breaking another law in the process, such as, for example, trespassing or breaking or entering.

We also affirm the value of photography and film in securing law enforcement officers from false accusations. This application has already been widely recognized by law enforcement departments across the country, and it’s partly for this reason that video dashcams are now standard issue in law enforcement vehicles.

History
In the past several years, many cases have come to light in which police officers sought to confiscate cameras and delete images, even though (a) they have no legal authority to do so and (b) this may actually constitute a crime in itself. The following incidents point out the need for all citizens to be informed of their rights, and for all law enforcement officers to be aware of those rights.

The rights of people to make and publish  photographs and films in public places, and in private places open to the public, are hallmarks of a transparent democracy

The most glaring example is the case of Robert Dziekanski, a Polish man who died after being tasered by RCMP officers at the Vancouver airport in 2007. Dziekanski’s tasering and subsequent collapse was filmed by Paul Pritchard, who surrendered the video to police with the understanding that they would return it to him in 48 hours. When they did not do so, Pritchard initiated a lawsuit against them. The video was ultimately returned. Partly as a result of its existence, the RCMP eventually admitted that they had misled the public in several statements about the Dziekanski incident. They issued an official apology for their actions and agreed to a financial settlement with Dziekanski’s mother. All four officers involved were formally accused of having lied in notes and statements about what happened that day. Without the existence of the Pritchard video, it is certain that the outcome of the investigation would have been different.

Last year, lawyer Karen Selick published an opinion piece in the National Post concerning an incident at the home of one of her clients.  During the incident, police confiscated numerous cell phones, deleted images, and made threats of arrest to various people for photographing police activity. Selick contends that the behavior of the police was not only out of bounds but was also criminal.

Most recently, on June 2, 2013, Alex Consiglio, a Toronto Star photographer, was arrested at Toronto’s Union Station, put into a headlock by a police officer, and ticketed for trespassing. This came after Consiglio had been asked at least twice to stop taking pictures, including pictures of police officers, and to leave the premises. Consiglio’s case is significant because photography on private property that is open to the public is not an offence and is not civilly actionable unless posted signs specifically prohibit it, or photographers are informed by security guards, owners, or other personnel that they may not take photographs. The owner of Union Station, the City of Toronto, apparently stipulates that members of the public are free to take photographs at any time, but members of the press must first sign a liability waiver. In the opinion of PEN Canada, this requirement for a waiver creates a stifling effect upon the ability of members of the press to do their work effectively, and the requirement should be rescinded by the owner of Union Station.

In the past three years there have been four other incidents that PEN believes are worthy of examination:

In The United States
While American federal and state law differ from Canadian law in many important respects, two incidents have taken place there that we believe are worth mentioning in this context.

On May 14, 2012, the United States Department of Justice wrote a letter to the Baltimore Police Department asserting that the right of people to photograph and film police officers is protected by the First, Fourth, and Fifteenth Amendments to the Constitution. The DOJ also stated that the ability to photograph and film police officers does much to enhance the appearance of transparency of law enforcement organizations and is therefore a way of building public trust and goodwill. PEN Canada believes that the DOJ is entirely right in this assertion, and we wish to uphold and adopt it as our own.

After the terrorist bombings in Boston last April, as noted in this Washington Post article, citizen photography played a hugely important role in establishing the identity of the bombers. Investigators received hundreds of still and moving images from cell phones and handheld cameras that allowed them to piece together a timeline and ultimately to find images of the suspects, resulting in the death of one and the capture of another.

Often police officers seem willing to use violence to stop photographers, as if photography itself were a form of assault instead of a right.

We believe these instances offer additional evidence that public photography should ultimately make for a more transparent, open, and free society, provided standards of privacy and decency are adhered to. It also fosters a more law-abiding culture.

Analysis and Recommendations
The incidents mentioned above show that police officers are sometimes prepared to deprive people of the rights set out above in this memo. Neither photography nor filming in and of itself constitutes obstruction. Often police officers seem willing to use violence to stop photographers, as if photography itself were a form of assault instead of a right.

This state of affairs must not be allowed to continue in Canada. PEN Canada calls upon law enforcement officials to recognize that photographing and filming in public places is in the public interest, and to ensure that their personnel are familiar with the laws concerning public photography/filming and photography/filming of police officers. We encourage people to continue to exercise their right to take photographs and make films in public, to photograph or film actions committed by law enforcement that may be worthy of concern, and to publish these images public, secure in the knowledge that they are within their rights to do so.

William Kowalski is a member of PEN Canada’s National Affairs Committee and the author of The Hundred Hearts, published by Thomas Allen, and seven other books.  He lives with his family in Nova Scotia.

View all posts by William Kowalski →