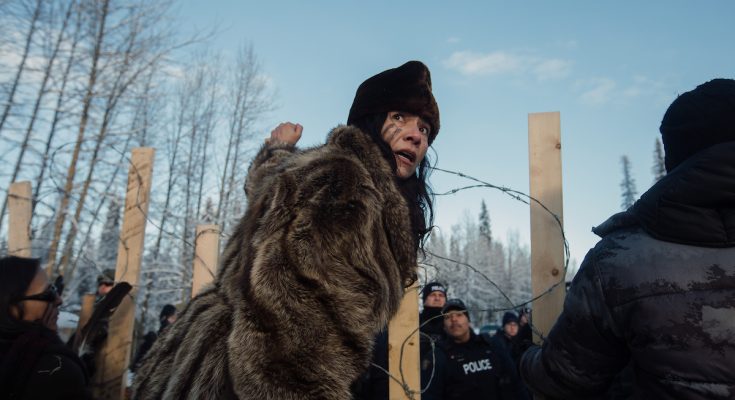 Sabina Dennis stands her ground as police dismantle the barricade to enforce the injunction filed by Coastal Gaslink Pipeline at the Gidimt’en checkpoint near Houston, British Columbia on Monday, January 7, 2019. The pipeline company were given a permit but the Office of the Wet’suwet’en, who have jurisdiction over the territory in question, have never given consent. Copyright © 2018 Amber Bracken

Amber Bracken is a Canadian photojournalist who has reported extensively on the impacts of colonization, often affecting Indigenous peoples in North America. PEN Canada awarded her the 2022 Ken Filkow Prize for her courageous coverage of  the 2021 coastal pipeline protests on Wetʼsuwetʼen First Nation territory in British Columbia. Bracken has also won the Contemporary Issues category of the 2017 World Press Photo awards and in 2022 won the overall World Press Photo of the Year.

PEN Canada: In an exchange with the geographer Kristin Wilson, the war photographer James Nachtwey says that photojournalists visit distant, dangerous or inaccessible places “to show [the general public], to reach out and grab them and make them stop what they are doing and pay attention to what is going on — to create pictures powerful enough to overcome the diluting effects of the mass media and shake people out of their indifference — to protest and by the strength of that protest to make others protest.” Do you view your work in a similar light?

Amber Bracken: It’s a rare photograph that immediately spurs people to action, no matter how beautiful or compelling it might be, and frankly I don’t want to idealize work for how difficult it might be. Sometimes the most important stories are at the end of our block, and sometimes they are deep in the woods, but in either case, the most important thing I do is to lend my attention, and my access to platforms that garner our collective attention, to people and events that are in all of our interest to pay attention to. Good information empowers better conversations, and hopefully better long term decisions. Of course I want my images to cut through the noise of a crowded visual landscape, but first I need to focus on the story — what’s important and what’s true — and I can’t always control what people will respond to.

PC: At what age did you know that you wanted to become a photojournalist? What made you think that it might become a viable career?

AB: I’m still not convinced it’s a viable career — at least it’s not an easy one. But like all difficult paths, you have to start down it to see what might come next. I decided pretty matter of fact at age 15 that I wanted to be a photojournalist. We had one of those job aptitude tests at school and I can’t remember what I got back, except that I hated it so I decided to think up my own future career. I liked to draw, but I had no patience, so I knew I needed something more immediate, like photography. I wanted to do something that meant something in the world, that did some good and I sort of picked photojournalism as an intersection of those things. It seems really naive to me now, and I only knew it was even a job people did because of National Geographic. It definitely took me a while to sort out how to make it real.

PC: What sparked your interest in Indigenous communities? What would you like people who are unfamiliar with the landscapes and the stories of these communities to take from your work?

AB: I was raised to care about people, and to hate injustice, but I also grew up in central Alberta, where the culture was saturated with crummy racist stereotypes about Indigenous people. I hated those stereotypes but it wasn’t until I was working at a newspaper, covering issues like MMIW and listening more to Indigenous leaders, that I really started to understand those racist cliches as the victim blaming that they are—making fun of Indigenous people for the consequences of centuries of attempted erasure. That realization made me angry and also made me feel responsible, as an Albertan, to counter them. My first and ongoing serious bit of reporting in Indigenous communities was on intergenerational trauma from residential schools as recent, deep and ongoing harms.

I don’t see myself as a reporter on Indigenous communities, but as a reporter on the impacts of colonization. I hope people will understand that every symptom of disorder or dysfunction in Indigenous communities is directly linked to generations of colonial policies bent on their assimilation or destruction. I hope people who encounter my work will take it as a first step to read more, and listen more to Indigenous people. I hope that people will take away that colonization is a shared history, between Indigenous and settler communities, and moving forward will take work and healing from all of us.

PC: In one of your Standing Rock images the police look like invaders stomping across a field with face shields, truncheons and tear gas canisters. In another, a pipeline with luminous segments snakes across a field like a giant glowworm. Did these scenes feel as unnatural, as cinematic as they appear?

AB: Those moments were more surreal, complex, alive and difficult than I have the power to capture in a still image. I understand how the drama can make them feel like fiction, but if anything I would say that my images downplay the pressures of those moments. It’s important to remember these are the lived realities of Indigenous people, here in Canada and the United States.

PC: Can you describe a few of your favourite images from the Wetʼsuwetʼen protests and explain what you were trying to capture in them?

AB: My relationship to my own pictures is complicated, so I don’t really have favourites. I do really love some of the quieter moments — Molly Wickham and Shaylynn Sampson leaning into one another as they wait for police, or there is this one portrait of Molly, where her daughter has drawn all over her face while they were playing together. I love the contrast of the gentleness and play within the tension of the issue at hand. From the moments during police enforcement, there is a photo from 2019 when the RCMP are mounting a barricade and Sabina Dennis looks back — you can see her fear but also her determination. That photo is one of the times I’ve come close to photographing the intensity of what it felt like to be there.

PC: What tips would you give to an amateur who wants to chronicle protests or scenes from the daily life of their communities?

AB: Do less. Invest in people and don’t worry so much about being everywhere, put that energy into making one story great. Spend time listening, spend a lot of time listening, do your own reading and research, verify the things that you hear. Spend time just observing, let the pictures flow from that, don’t make too many rules about what you do or don’t photograph, let yourself make silly pictures and bad pictures, along with the important pictures, accept that sometimes the silly pictures are the important pictures.

PC: Name three photographers who have inspired you and tell us a bit about them.

AB: Larry Towell, storied Canadian icon with a poetic eye. He reforested his corner of the Canadian shield and writes “Human Being” on his business card. He is a creative, generous and determined storyteller.

Stacey Kranitz, fearless immersive photographer focusing on the Appalachian region of America. Her portrait of a region plagued by stereotypes and cliches, has evolved over time, and is nuanced, subtle and challenging.

Gordon Parks, beautifully photographed black people and the civil rights struggle with so much humanity and dignity. He models how taking a specific perspective can empower relatable and useful representations.