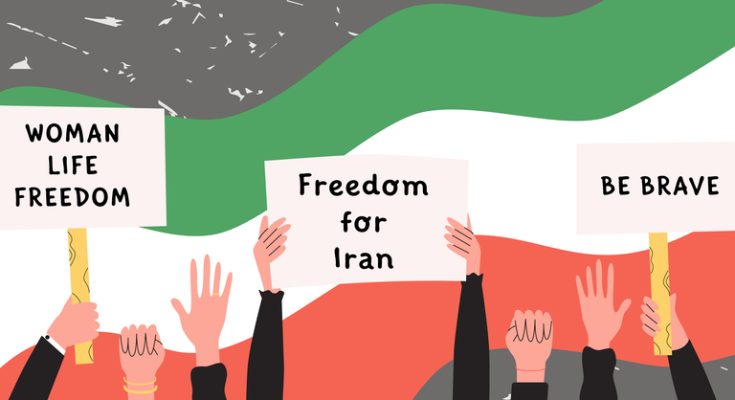 On September 16, 2022, a young woman from the Kurdish town of Saqez in northwest Iran travelled to Tehran. Shortly after her arrival, she was arrested for wearing an “improper hijab” and later died while in the custody of the “Morality Police.” Her tragic and unjust death sparked a series of protests and her name, Zhina (Mahsa), soon became a national symbol of resistance to an oppressive, theocratic and misogynist government.

The protests, led by women and youth, grew into a movement despite a brutal crackdown. For the last two months, the world has watched crowds of Iranians chant “Woman. Life. Liberty.” The song Baraye (For), has become an anthem for the national uprising and all over the world thousands of people, celebrities and ordinary citizens, have publicly cut off locks of their hair in solidarity with the protesters.

On August 19, 1978, the Cinema Rex in Abadan, Iran, was set on fire; an act of terror that claimed nearly 400 lives. It provoked hatred and indignation toward the Shah and helped Ayatollah Khomeini to claim absolute power as leader of the 1979 Revolution. At the time, most Iranians paid more attention to Khomeini’s charisma rather than his play-acting. A few years later, it was revealed that the attack had been carried out by a radical Islamic group as a show of allegiance to Khomeini.

On April 1, 1979, Khomeini declared Iran an “Islamic Republic.” Relying on the overwhelming support of his zealous followers, he established an anachronistic regime founded on lies and deceit. In the words of King Darius’ inscription at Bisotun: “Then the lie became great in the country.” The nation became ummat (followers), and women were forced to wear a hijab and comply with the rules of Sharia. Thanks to taqiyyah – which allows a Muslim to lie – and the related concept of kitmān (concealment by silence) dual thinking and dual lives became normalized in this theocratic dictatorship. For more than four decades, Khomeini’s malicious dreams, and those of his successor, Khamenei, have become Iran’s nightmares, crippling the economy, ruining the environment, imposing international isolation, gender apartheid, corruption, mismanagement, harsh restrictions of civil liberties, the violent repression of dissent, and a brain drain.

Iranians often refer to Darius the Great’s prayer to ward off three great evils: enemies, drought, and the lie. The Islamic Republic has now become the embodiment of all three. It is the worst enemy of Iran and its citizens, its true legacy is a chronicle of infamous lies written in blood. The history of the Republic is replete with crimes like the 1988 massacres of political prisoners, and the so-called “chain murders” of writers and dissidents during the subsequent decade; the 2009 crackdown on the green movement, 2019 Bloody Aban, and the downing of the Ukrainian flight 752 in 2020.

As the anti-government protests enter their eighth week, the death toll from the crackdown has surpassed 300 (including 41 children). Among thousands of arrested people, there are more than 20 writers (including Atefeh Chaharmahalian, an activist poet), and more than 60 journalists (according to the CPJ). Two journalists, Niloufar Hamedi & Elaheh Mohammadi, have been charged with ‘propaganda against the state’ over the coverage of mass protests. They are at heightened risk.

On November 15, 1981, PEN International launched a Day of the Imprisoned Writer campaign. As a writer, witnessing the sufferings of those who seek truth and justice in my homeland, I often think of Émile Zola’s great letter, J’Accuse. Likewise, I recall Václav Havel’s insight about living in truth, when I hear them chanting for freedom on the streets. I presume that, in their struggle for living a life in truth they need the support of those writers and intellectuals who believe they can be the voice, the very conscience of humanity. I urge them to stand in solidarity with the “Woman, Life, Liberty” movement and call on the Islamic Republic to immediately release everyone arrested in the protests or imprisoned for alleged political crimes.

A list of writers who have been censored in Iran can be viewed here.

Born in Tehran in 1953, Fereshteh Molavi lived and worked there until 1998 when she immigrated to Canada. She worked and taught at Yale University, University of Toronto, York University, and Seneca College. A fellow at Massey College and a writer-in-residence at George Brown College, Molavi has published many works of fiction and non-fiction in Persian in Iran and Europe. She has been the recipient of awards for novel and translation. Her first book in English, Stories from Tehran, was released in 2018; and her most recent novel, Thirty Shadow Birds, was published by Inanna Publications in 2019. She lives in Toronto. www.fereshtehmolavi.com