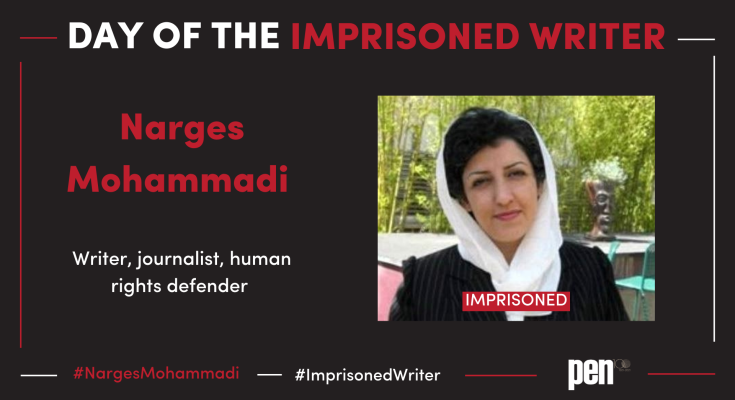 Mohammadi was arrested and arbitrarily imprisoned on several occasions over the past years. She was imprisoned at Evin Prison in May 2015, and in 2016 sentenced to 16 years imprisonment on several counts, including for “taking part in assembly and collusion against national security” and “spreading propaganda against the state”, in relation to her activities at the DHRC.

In  February 2020, she was served with further charges including “spreading propaganda against the system” and “assembly and collusion with intent to take action against national security”. The charges stemmed from her role in staging sit-ins, conducting educational classes, and “defaming” the governor of Evin prison by accusing him of torturing and assaulting her.

In May 2021, she was handed a new sentence of 30 months in prison and 80 lashes, a few months following her release in October 2020 after serving five and a half years in prison. In November of the same year, she was arrested while attending a memorial service for the killed protestor Ebrahim Ketabdars in the city of Karaj. Mohammadi spent over two months in solitary confinement, about which she wrote intensively, explaining its toll on prisoners of conscience in Iran and labeling it “white torture.”

According to her family, Iranian authorities brought further charges against her in January 2022, including “assembly and collusion to act against national security” and “acting against national security and disrupting public order.” Following a summary trial in the absence of a legal counsel, Mohammadi was sentenced to an additional eight years and two months in prison, and 74 lashes. The sentence also imposes further punishments, including internal exile and a ban on giving statements to the media, using social media platforms, or participating in political groups.

Mohammadi was released on medical furlough following heart surgery in February 2022. However, on April 2022, she was arrested by Iranian intelligence officers at her home as the authorities decided to end her medical furlough and ordered her back to jail. Her family reported that she was ill-treated and insulted by the officers while being arrested.

In October 2022, PEN International learned that Mohammadi was sentenced to another 15 months in prison, followed by a two-year ban on travel and on joining political movements or parties, and three months of community service. The sentence was handed in absentia by Branch 26 of the Revolutionary Court following a summary trial. In addition, prison authorities issued a two-month ban on phone calls with her family in Iran as a punishment for her leading role in organizing protests in prison in solidarity with the protest movement that swept the country following the death of Mahsa Amini.

According to her family, Mohammadi is now facing a total of 10 years imprisonment, 150 lashes, and a 12 million Iranian Rial fine (approximately £250) in addition to the restrictions imposed in October this year. She is also at risk of flogging.

Mohammadi suffers from a neurological disorder that can result in seizures, temporary partial paralysis, and a pulmonary embolism for which she is said to be denied essential medication that could prevent further blood clots from forming. In May 2019, she underwent an emergency hysterectomy, after which she was returned to Evin Prison. In June 2019, PEN received reports that Mohammadi was being denied adequate medical care and antibiotics to treat a subsequent infection resulting from the surgery. PEN also received reports that she was denied necessary medications in June 2022.

Mohammadi has written for various reformist journals, among these Payam-e Hajar, which was later banned for its articles promoting the rights of all Iranians, regardless of gender, religion, or political affiliation. In her latest book, White Torture, she documented the imprisonment of thirteen women, including Nazanin Zaghari-Ratcliffe, and their shared experiences: harassment and beatings by guards, total blindfolding, and denial of medical treatment. The book also sheds light on the prolonged use of solitary confinement against prisoners of conscience in Iran.

Following the restrictions imposed in October this year, Mohammadi is not allowed to call her husband, prominent journalist Taghi Rahmani, who spent 17 years in prison and then fled Iran for France in May 2011, or her children, who live in exile with their father.

“I have faith in the path I have chosen, the actions I have taken, as well as my beliefs. I am determined to make human rights a reality [in Iran] and have no regrets. If those who claim to be spreading justice are firm on their judgment against me, I am also firm on my faith and beliefs. I will not waiver under tyrannical punishments that will limit my freedom to the four walls of the prison cell. I will endure this incarceration, but I will never accept it as lawful, human or moral, and I will always speak out against this injustice”. Narges Mohammadi, as quoted in Prominent Rights Activist Narges Mohammadi Rejects Prison Sentence in Stinging Open Letter, October 14, 2016.

PEN International considers Narges Mohammadi’s imprisonment a breach of her right to freedom of expression and calls for her immediate and unconditional release.

PEN International also calls on the Iranian authorities to ensure Mohammadi’s physical and mental well-being, to grant her full access to all necessary medical care as a matter of urgency, and not subject her to any form of physical or psychological suffering, torture or ill-treatment, including flogging, pending her release.

This is what you can do:

Appeals can be sent to:

Please copy to the Embassy of Iran in your country. You can find embassy addresses here.

Social media
Raise awareness about Mohammadi’s case on social media, using the sample messages below and the hashtags #NargesMohammadi #ImprisonedWriter

Facebook
I join @peninternational’s urgent call for the immediate release of #NargesMohammadi, Iranian writer, journalist, and human rights defender, who currently faces 10 years imprisonment and is at risk of flogging in #Iran. Will you join our call? Take action now: https://pen-international.org/campaigns/day-of-the-imprisoned-writer-2022 #ImprisonedWriter

Twitter
I join @pen_int‘s urgent call for the immediate release of #ImprisonedWriter, journalist and human rights defender #NargesMohammadi, who currently faces 10 years imprisonment and is at risk of flogging in #Iran. Will you join our call? Take action now: https://pen-international.org/campaigns/day-of-the-imprisoned-writer-2022

We also encourage you to highlight Mohammadi’s case by:

Please keep us informed of your activities. Messages can be sent to Mina Thabet, MENA Regional Coordinator, at Mina.Thabet@pen-international.org.