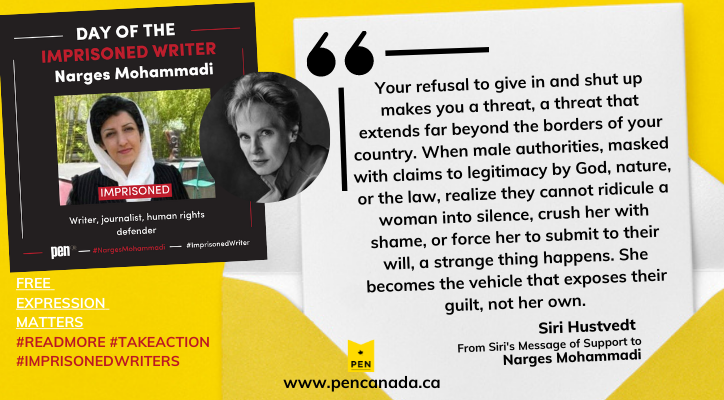 I am writing to you with mingled feelings of humility, awe, and rage at what you have endured. I have never been arrested, imprisoned, kept in solitary confinement, beaten, or sentenced to flogging for speaking and writing what I believe. I have been able to protest, speak out, and write freely. I have not been forcibly kept away from my beloved daughter and husband or refused medicine for an illness. I do not know how I would respond to such torture, nor do I think any person can know—not until she must face it. I know only that when I imagine these blows, I recoil in horror.

And yet, despite lengthy prison sentences, continual harassment, and torture, you have for over two decades held fast to the right to free expression, have served as Deputy Director of Iran’s Centre for Human Rights Defenders, championed other imprisoned writers and intellectuals, collected the testimonies of women tortured in prison in a book, opposed the death penalty, and asserted the right of the people to protest their government. I and countless others stand in awe of your commitment.

I read an interview you gave on June 4th, 2021, and ever since I have been haunted by your answer to one of the questions you were asked: Why has the judiciary acted so harshly against you? You said, “Mainly because I am woman who does not give in.”

Your refusal to give in and shut up makes you a threat, a threat that extends far beyond the borders of your country. When male authorities, masked with claims to legitimacy by God, nature, or the law, realize they cannot ridicule a woman into silence, crush her with shame, or force her to submit to their will, a strange thing happens. She becomes the vehicle that exposes their guilt, not her own. She humiliates them by revealing their impotence, and their shame is converted into her strength. In frustration, the patriarchs can only increase their punishments. They beat harder and harder, but she, who has not lifted a hand against them, who has used words and peaceful protest as her weapons, flips the hierarchy they so desperately want to protect by demonstrating her indomitable moral superiority over them. She does not give in. She speaks again. And the edifice they claim to have built on bedrock begins to sway. When those who hear her, look down at its foundation, they realize bedrock is swampland—a morass of vanity, greed, and hunger for power.

Thousands of girls and women, as well as boys and men, in Iran, have taken to the streets in resistance. They have been met with bloody retaliation from an entrenched but shuddering regime. It is impossible to know when the fissures become gaping holes and the building collapses, but when it does, you will remain a woman who did not give in. You are one extraordinary person, but we who believe in you and support the cause of universal human rights are many. That struggle does not end. It goes on.

In Humility, Rage, and Awe, 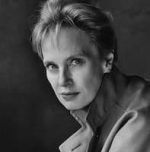