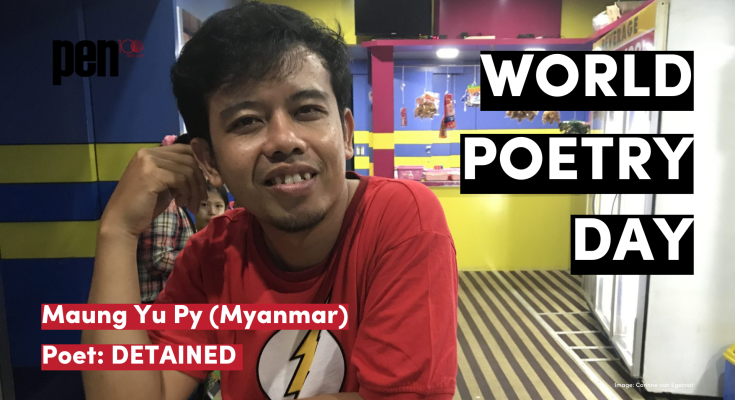 “The story of Maung Yu Py, is the story of all those who are detained, harassed and persecuted for exposing injustices and defending freedom of expression through poetry. The PEN community stands in solidarity with Maung Yu Py and all poets who are silenced in Myanmar and across the world. Their voice must be heard.” — Ma Thida, Chair of PEN International’s Writers in Prison Committee.

Every year on March 21, PEN International observes World Poetry Day, celebrating one of the most relished forms of cultural and linguistic expression and identity across regions, and honouring those poets worldwide who face threats, intimidation and violence for speaking up and holding governments to account.

Adopted by UNESCO during its 30th General Conference in Paris in 1999, with the aim of supporting linguistic diversity and endangered languages through poetic expression, the creation of World Poetry Day was envisioned by PEN International at its 1997 Congress in Edinburgh, as proposed by PEN Turkey and seconded by Melbourne PEN.

PEN International and PEN centres around the world have long campaigned on behalf of poets at risk and for the protection and promotion of minority languages. In 2011 PEN’s Translation and Linguistic Rights Committee developed the Girona Manifesto on Linguistic Rights – a ten point document designed to be translated and disseminated widely as a tool to defend linguistic diversity around the world.

Today, on World Poetry Day 2022, PEN International features the case of poet Maung Yu Py, detained by the Burmese authorities for exercising his right to freedom of expression through poetry.