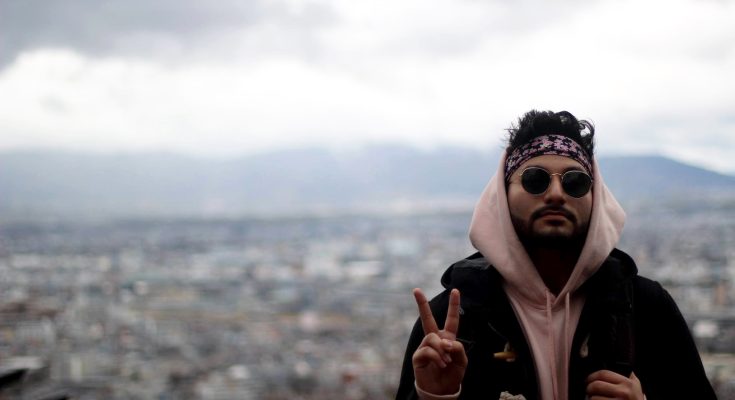 Fareh Malik is a spoken word poet from Hamilton, Ontario and the winner of the 2022 RBC/PEN Canada New Voices Award. His new book Streams that Lead Somewhere is available from Mawenzi Press. In its citation the New Voices Award jury praised Malik’s “tenderness and throat-grabbing use of imagery” and his “wide range of voices and tones to convey a nuanced spectrum of emotions and a laser sharp critique of Canada’s blatant and covert systemic racism.”

PEN Canada: Your first book has just been published, with a glowing endorsement from no less than Hanif Abdurraqib, author of Go Ahead in the Rain: Notes to A Tribe Called Quest. How did he come across your poems? Can you tell us a bit about the labour involved in producing a first collection? How has the book been received?

Fareh Malik: Around a year and a half ago when Gaza was being bombed and Palestinians were in desparate need of financial assistance, I founded an event series called “Poets for Palestine” and curated some wonderful readers. I reached out to several Muslim and/or activist poets for promotion and participation — one of whom was Hanif Abdurraqib. Hanif very generously offered to promote and attend the event. A year later, when my book was looking for blurb-writers, I reached out to him again on the off chance he might be interested, and he was! It’s still very surreal to me, I’m such a huge fan of his.

I think the labour involved with producing a first poetry collection is navigating what it really means to create a cohesive collection of poems, and not just anything that comes to one’s mind. I worked hard to make the poems in Streams That Lead Somewhere come together in tone and theme. Also, coming from the place of being a new author and of BIPOC underrepresentation in publishing, it was a stressful time to get my book out there. I am so happy that it is now, though.

From what I’ve heard thus far, people really enjoy the book. First of all, the book itself is absolutely gorgeous. Huge shout out to Mawenzi House — I’m in love with every detail of it. I’ve had a few people message me to blame me for making them cry. I’ve had other people laugh at the deadpan nature of some of the pieces. I think the book ends up being sort of whatever energy you bring to it. It’s meant to be that way — accessible, and impactful no matter what stage of life you’re at.

PEN: Describe yourself in seven words.

PEN: You grew up as a racial and religious minority in Hamilton, which was labeled the “hate capital” of Canada in 2019? How did your experiences there shape your poetry?

FM: I think my racialized experiences help fuel me to create more social-justice natured work. I am often reminded that we, as a society, have a lot of work to do, and I want my art to be there for those that may need it. It also really helped me dissect the nature between this racialization and corresponding mental illness/powerlessness. I want to bring that inspiration and facilitate change in communities I call home; how better to do that than art?

PEN: You have degrees in Life Science and Health informatics. Does any of this knowledge inform  your work or is it a completely separate part of your life?

FM: It may not seem like it, but by nature, I’m a very scientific person. I’ve wanted to be a doctor most of my life. I read recent research in my free time. Even besides medicine, I’ve always taken personal time to study physics, astronomy, chemistry, etc. I don’t know — I think it’s really neat to learn about the nuances of our world and lives, and then juxtapose them with this really elaborate and abstract artwork. I recall a line from my poem: I heard that Venus rotates so slowly that I could hold your hand, and we could walk forever into a sunset which was inspired by an astronomy textbook. Essentially, I’m a big nerd but I am trying to turn it into cool stuff.

PEN: Hip hop and rap artists produce the best known poetry in the world. Which ones  have had the greatest impact on your writing, and whom would you recommend to an emerging writer and/or spoken word artist?

FM: Oh god this is the hardest question of the bunch. There are so many emcees out there that I admire. I’m going to limit myself to four, I think. Andre 3000. Nas. Lupe Fiasco. Kendrick Lamar.

In terms of listening to artists, if you are looking to gain lyricism within spoken word/poetry, I would have to mention Talib Kweli, Lauryn Hill, Mos Def, Black Thought, Rakim, Common, Q-Tip (this list could go on for hours so I will stop it here).

PEN: You are a Button Poetry fan and will soon be mentored by Sabrina Benaim, one of its stars. What has the series meant to you and where else should a newcomer to  spoken word poetry look for emerging talent?

FM: Button Poetry was huge for me in terms of my transition from spoken word to literary poetry. Hanif Abdurraqib and Rudy Francisco were literally my guides in putting thoughts and words to paper without the poetry losing conveyance of its soul. I am still in shock that I’ll get to work with Sabrina — she’s so cool, and I’ve loved her work for a long time.

My introduction to spoken word was the Def Jam Poetry Slam series back in the day. Being able to see storytellers like Saul Williams and Shihan go on stage and just showcase their heart made me realize that I wanted to do that too. It was also a really cool way of pivoting from hip-hop, as there would often be rappers like Common and Lauryn Hill on stage. Also, check your own community! Look for local slams and readings happening near you; the talent and inspiration is all around us, and there is a special energy you get when you’re in your own home.

PEN: If you could persuade everyone you know to read just a book, listen to a single album and watch a movie this year, which ones would you pick?

FM: Never mind, this is the hardest question. I’m going to throw it back to Hanif for the book, because of how much They Can’t Kill Us Until They Kill Us impacted me and my writing.

The album I’ve listened to the most in the past ten years or so is probably To Pimp a Butterfly by Kendrick Lamar, but I feel like most people have already heard it. Instead, I’m going to suggest that people listen to Lupe Fiasco’s The Cool. Lyrical ingenuity at its finest.

I’m a really big horror movie fan, and in honour of Halloween coming up soon, I’m going to recommend people watch Us written and directed by Jordan Peele. I loved it so much, and its decisions in artistic cinematography were stunning. If you’ve already seen Us, then go watch Nope. It’s frightening and hilarious. Keke Palmer might be my new favourite actress.

PEN: In a recent LA Times Op-Ed, the president of the US Authors Guild warns of “the potential harm [the proposed merger of Penguin Random House and Simon & Schuster] might do to diversity in the marketplace of ideas. Fewer publishers would mean fewer voices — including marginalized voices — being published. It means a reduction in political and cultural viewpoints, which especially can have an impact on authors with unusual, unpopular or controversial ideas, whose books tend to be more of a financial risk for publishers.” Does this seem a fair assessment of the challenges faced by an emerging writer in the current media landscape?

FM: I definitely think that’s a fair assessment. As someone whose debut book was made possible through a small/medium size publisher, I think I’ve utilized the unique “voice” of Mawenzi House to further BIPOC and Muslim representation in literature and the arts. I’ve found that this is technically still possible in the monopolized areas of publishing, but there it is so intensely driven by marketplace viability and the “what’s hot now” effect. I believe our diversity is a huge strength. It is something that, unfortunately, divides us more often than not, but without the offering of different viewpoints and beliefs, there can be no discussion, education, or growth.