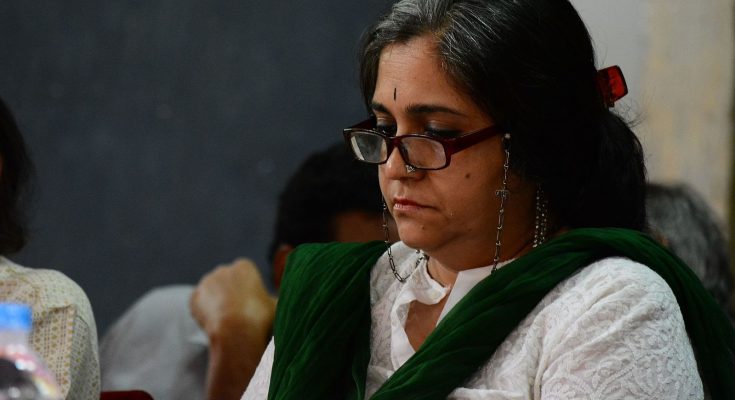 PEN International is alarmed by reports that writer and human rights defender, Teesta Setalvad, has been detained by the Indian authorities. Her detention comes just a day after her petition to re-open investigations into the role of government officials in the 2002 Gujarat Riots, which resulted in over 1,000 deaths, was dismissed by the Supreme Court. We urge the Indian government to ensure Setalvad’s immediate and unconditional release, and to end the persecution of dissenting voices.

On June 25,  2022, anti-terror police from the state of Gujarat detained Teesta Setalvad at her home in Mumbai, the capital of the neighbouring state of Maharashtra, on allegations of criminal conspiracy and forging evidence as part of her efforts to seek government accountability for the 2002 Gujarat Riots, a period of inter-communal violence that led to the deaths of hundreds of Indian citizens. Setalvad has alleged that she was assaulted by two members of the anti-terror police when she requested permission to speak with her lawyer. On June 26, a Gujarat court remanded Setalvad in police custody until July 2. Setalvad faces a potential life sentence if convicted under Section 194 of the Indian Penal Code.

‘Teesta Setalvad’s arrest is a form of harassment. The law should indeed take its own course, but in India the process is usually the punishment, and keeping dissenting voices entangled in cases for years is a time-honoured practice. Setalvad has peacefully expressed her views and represented the voices of those seeking justice with unflinching courage. Real democracies honour such defenders,’ said Salil Tripathi, member of PEN International’s board.

Just one day prior to Setalvad’s detention, on June 24, the Supreme Court rejected a plea submitted by Setalvad and co-petitioner Zakia Jafri, whose husband, the former parliamentarian Ehsan Jafri, was killed during the riots. The plea sought to reopen an investigation into the potential involvement of local government officials in the violence. Among those accused of being complicit in the violence was then Chief Minister of Gujarat and current Prime Minister of India, Narendra Modi. Despite reports of serious flaws in the initial investigation, the Supreme Court-appointed investigatory body concluded that there was insufficient evidence to prosecute Modi or any other senior government official.

News of Setalvad’s detention has drawn swift international condemnation, including comments from Amnesty International India and the United Nations Special Rapporteur on Human Rights Defenders, Mary Lawlor, who has called for her release.

Setalvad’s detention takes place within an increasingly hostile environment for free expression, where writers, journalists and human rights activists are frequently targeted for their peaceful criticism of the Indian government. The ongoing crackdown on freedom of expression across the country has resulted in numerous detentions on spurious charges, including the imprisonment of scholars Hany Babu and Anand Teltumbde. Poet Varavara Rao remains on trial while on medical bail and faces a potential death sentence if convicted.

PEN International calls on the Indian government to end its persecution of writers, journalists, and government critics, and to immediately and unconditionally release Teesta Setalvad and all those detained for peacefully exercising their right to freedom of expression.

Teesta Setalvad is a writer, journalist and one of India’s most high-profile human rights defenders.

Initially embarking on a career in journalism in 1983, Setalvad has over a decade’s experience writing for news outlets including The Daily, The Indian Express and Business India. In response to the 1992 demolition of the Babri Masjid by Hindu nationalists, Setalvad left mainstream journalism, along with her husband and fellow journalist, Javed Anand, to establish a monthly magazine called Communalism Combat, which sought to address issues of religious intolerance and the role of certain political parties which stoke inter-religious hostilities within Indian society.

In the immediate wake of the 2002 Gujarat riots, Setalvad established Citizens for Justice and Peace (CJP), an NGO dedicated to providing legal and financial aid to the victims of the riots. Over the following years, Setalvad rose to prominence as an activist, mounting numerous campaigns for the rights of women and marginalised groups across India.

In 2007, Setalvad joined Zakia Jafri as co-petitioner to call for an investigation into dozens of Gujarat government officials, including then Chief Minister of Gujarat, Narendra Modi, for their role in the riots. The petition later resulted in India’s Supreme Court launching an investigatory probe into the riots.

In 2017, Teesta Setalvad published her memoir, titled ‘Foot Soldier of the Constitution’, charting her career from journalist to civil rights activist and human rights defender.