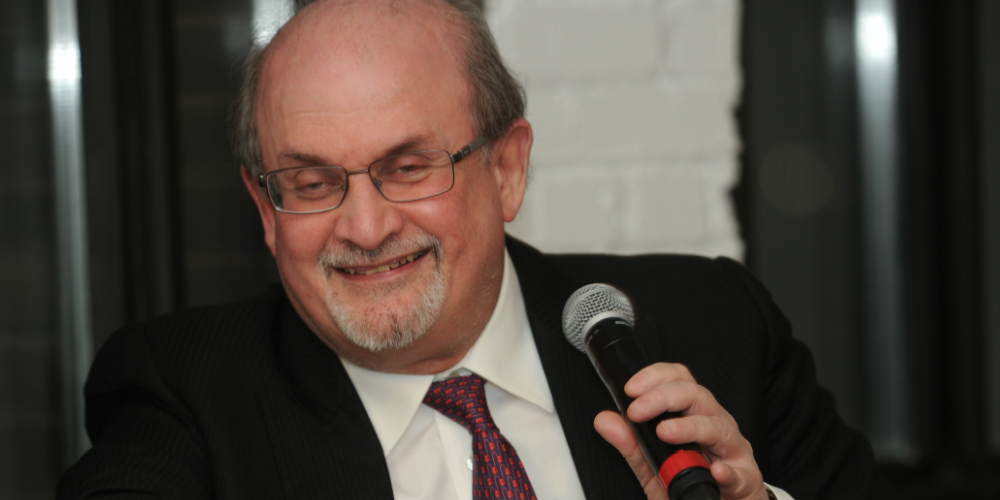 PEN Canada was shocked and horrified by the vicious attack on Salman Rushdie at the Chautauqua Institution in western New York State last Friday. Now, a few days later, we are heartened by the positive news as to his condition – on the mend, says his agent — despite wounds that are life-changing and the prospect of a long road to recovery.

This attack is heartbreaking. Mr. Rushdie has been living under a death threat for over thirty years. In February 1989, the Ayatollah Khomeini of Iran issued a fatwa calling for his murder and the murder of those associated with his book, The Satanic Verses, which the Ayatollah claimed insulted Islam. Mr. Rushdie went into deep hiding, with constant police protection, for a period that lasted eight or nine years, before he resumed public life.

He had determined early on that he could not hand a victory to the Ayatollah by going silent. He continued to write and to speak publicly after emerging from hiding, though the fatwa calling for his murder was never lifted. He took the public stage as president of PEN America and spoke out widely on behalf of persecuted writers everywhere. He has become one of the pre-eminent champions of freedom of expression in the world, bringing a bright moral clarity to the issue, hard-earned.

We had hoped that the worst was behind him. And now this.

The setting of this terrible crime gives you something of the measure of the man. The Chautauqua Institution is set in a peaceful, pastoral setting, where it holds a summer program dedicated to the arts and to the free exchange and exploration of ideas. Rushdie was on stage being introduced by a man who had founded a city of refuge for writers facing persecution in their own countries. He was not there to promote a new book, but to talk about the idea of America as a safe home for exiles, of which he is one of the more famous. And this is where he was attacked.

Mr. Rushdie insisted on the freedom to critique ideas, including religious ideas. He pointed out that the writers of the enlightenment – the architects of free speech – were concerned about repression primarily by the church, not government authority. The western notion of freedom of speech rose precisely in response to the ideas of blasphemy and heresy, limitations on thought used as a weapon against dissenting thinkers. To make an exception to freedom of speech for critiques or satires of religion, for fear of ‘insult’ is to undermine the principle. If we are to be free to speak, we must be free to give offence, without fear of being imprisoned or threatened into silence – let alone stabbed.

Salman Rushdie is himself an eloquent spokesperson on this point. In an interview he did with Andrienne Clarkson for CBC years ago, he was asked what was at stake in fighting the fatwa. He said that his life depended on it, of course. But he also pointed out that all of us would lose if he were assassinated and the forces of repression won. “Let’s remember that the freedom of speech is not just the freedom of a writer to write, but the freedom of a reader to read, the freedom of a publisher to publish, the freedom of a bookseller to sell books…of all of us to decide for ourselves what ideas we choose to bring into our homes and into our hands – into our minds.”  If those decisions are going to be made for us, he said, then we are not living in a free country.

When we speak out in support of Salman Rushdie, we speak out for the future of free inquiry, opinion and debate. This attack reminds us of the fragility of the right to free expression, and the need to defend it today, tomorrow and every day. Otherwise this most fundamental of fundamental rights will be steadily eroded.

On behalf of all the members of PEN Canada we wish our dear friend and colleague, Salman Rushdie, a good recovery.