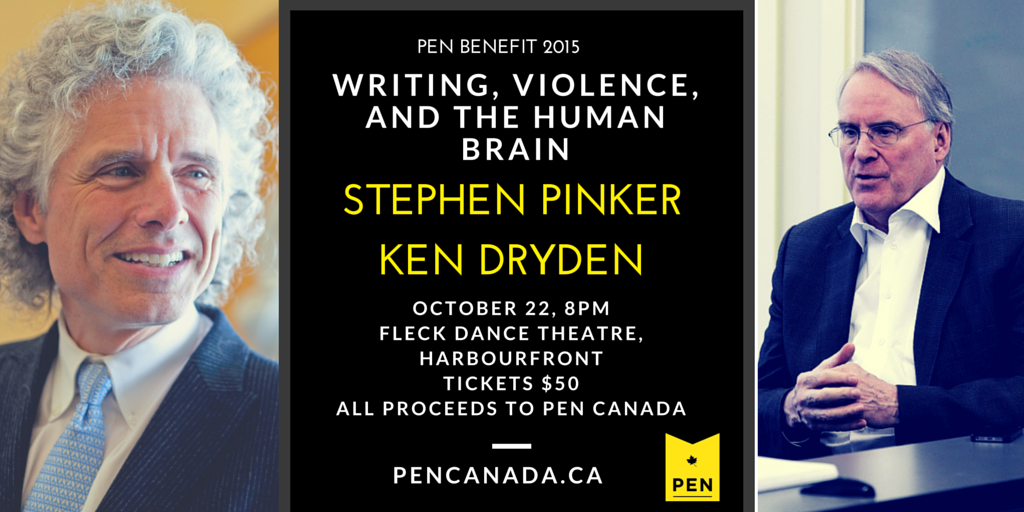 PEN Benefit at the International Festival of Authors

Canadian intellectuals Steven Pinker and Ken Dryden explore the surprising and far-ranging capacities of the human brain, from the writer’s narrative instinct to the athlete’s aggressive drive. Renowned cognitive scientist and linguist Steven Pinker is the author of The Sense of Style and The Better Angels of our Nature. Former federal cabinet minister and Hockey Hall of Fame goaltender Ken Dryden is the author of The Game and Becoming Canada.

Steven Pinker is an experimental psychologist and one of the world’s foremost writers on language, mind, and human nature. Currently Johnstone Family Professor of Psychology at Harvard University, Pinker has also taught at Stanford and MIT. His research on vision, language, and social relations has won prizes from the National Academy of Sciences, the Royal Institution of Great Britain, the Cognitive Neuroscience Society, and the American Psychological Association. He has also received eight honorary doctorates, several teaching awards at MIT and Harvard, and numerous prizes for his books The Language Instinct, How the Mind Works, The Blank Slate,and The Better Angels of Our Nature. He is Chair of the Usage Panel of the American Heritage Dictionary, and often writes for The New York Times, Time, and other publications. He has been named Humanist of the Year, Prospect magazine’s “The World’s Top 100 Public Intellectuals,”Foreign Policy’s “100 Global Thinkers,” and Time magazine’s “The 100 Most Influential People in the World Today.”

Ken Dryden was a Member of Parliament and acted as Minister of Social Development in the Martin government. He played goal for the Montreal Canadiens during the 1970s, during which time the team won six Stanley Cups, and was a member of Team Canada 1972. He is a member of the Hockey Hall of Fame and Canadian Sports Hall of Fame, and is the author of six books, including The Game and, most recently, Becoming Canada. He teaches at McGill, Calgary, Ryerson and Saskatchewan universities. He and his wife, Lynda, live in Toronto and have two children