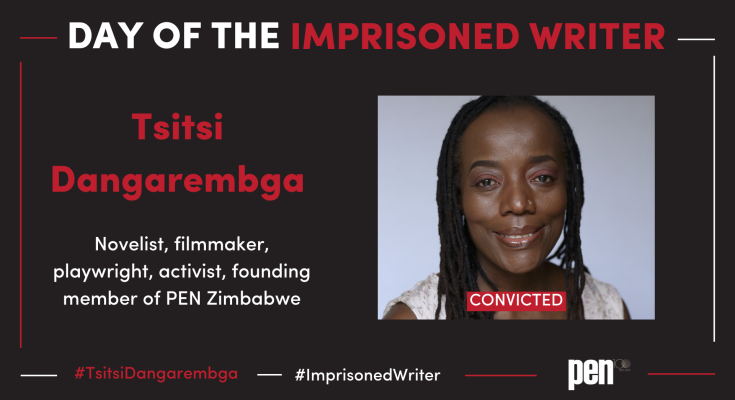 Dangarembga was arrested with her friend Julie Barnes on July 31, 2020 by members of the Zimbabwe Republic Police with neither warrant nor explanation, while peacefully protesting government corruption on a deserted street in Harare. She was detained overnight and then charged in court the following day with inciting public violence.

Dangarembga was released on bail of ZW 5,000 on August 1, 2020 and ordered to attend court on September 18, 2020. She was ordered to surrender her passport to the authorities and to report to a police station every week until her next appearance in court. She petitioned for a return of her passport and also challenged attempts by the state to prosecute her in the dreaded Anti-Corruption Court, although the charge under which she was arrested had nothing to do with corruption. Dangarembga successfully obtained her passport, however her trial proceeded.

On September 29, 2022, Dangarembga and her co-defendant were sentenced by a Zimbabwe Magistrates Court in the capital, Harare, to 6 months imprisonment, wholly suspended for 5 years on condition that they do not commit a similar offence. In addition, they were fined around 38,640 ZWL or 3 months imprisonment in default. They paid the fine and on October 13, they filed a notice of appeal against the conviction and sentence at the High Court of Zimbabwe.

Their conviction follows a long-running period of legal and judicial persecution that the two have endured since July 2020. PEN International condemns the conviction, yet another sad illustration of the lengths the Zimbabwean authorities are determined to go to punish critics of government conduct. Misuse of the administration of justice systems in attempts to supress free speech violates Zimbabwe’s Constitution and international human rights obligations.

Dangarembga’s arrest and prosecution are part of a coordinated crackdown by the Zimbabwe authorities on those speaking out against alleged cases of high-level corruption in which government and state officials are suspected of culpability. PEN International has been calling for the immediate dropping of all charges against her since August 2020. She was notably featured in PEN International’s 2021 Case List.

Dangarembga won the PEN Award for Freedom of Expression 2021, and the PEN Pinter Prize 2021. Her novel, This Mournable Body was shortlisted for the 2020 Booker Prize. She is also the author of Nervous Conditions, which she wrote at the age of twenty-five and for which she was awarded the Commonwealth Writers’ Prize. Nervous Conditions was praised by Doris Lessing as one of the most important novels of the twentieth century. She is the founder of the production house Nyerai Films and the International Images Film Festival for Women, as well as the Institute of Creative Arts for Progress in Africa where she works as director.

A statement by Tsitsi Dangarembga and Julie Barnes, following their conviction on September 2022 can be found here.

“Can you cook books and feed them to your husband? Stay at home with your mother. Learn to cook and clean. Grow vegetables.” ― Tsitsi Dangarembga, Nervous Conditions, 1988

PEN International considers Tsitsi Dangarembga’s imprisonment to be a breach of her right to freedom of expression and calls for all charges against her to be dropped, and an end to the campaign of harassment against her. We also call on the Zimbabwe authorities to uphold their national and international human rights obligations and to desist from all acts of persecution against dissenting voices such as Dangarembga. This is what you can do:

Advocacy
Write to the Zimbabwean authorities calling on them to drop all charges against Dangarembga and end the campaign of harassment against her.

Appeals can be sent to:

Social media
Raise awareness about Dangarembga’s case on social media, using the sample messages below and the hashtags #TsitsiDangarembga #ImprisonedWriter:

Facebook
I support @peninternational ‘s Day of the Imprisoned Writer campaign and stand in solidarity with Zimbabwean writer #TsitsiDangarembga who was recently handed a suspended sentence of 6 months imprisonment, for peacefully exercising her right to free speech while protesting government corruption in Harare in 2020. Will you join us? Your voice matters: https://pen-international.org/campaigns/day-of-the-imprisoned-writer-2022 #ImprisonedWriter

Twitter
I support @pen_int‘s Day of the #ImprisonedWriter campaign and Zimbabwean writer #TsitsiDangarembga who was recently convicted for peacefully exercising her right to free speech while protesting government corruption in 2020. Will you join us? https://pen-international.org/campaigns/day-of-the-imprisoned-writer-2022 #ImprisonedWriter

We also encourage you to highlight Dangarembga’s case by:

Please keep us informed of your activities. Messages can be sent to Nduko o’Matigere, Africa Regional Coordinator for PEN International: nduko.omatigere@pen-international.org.