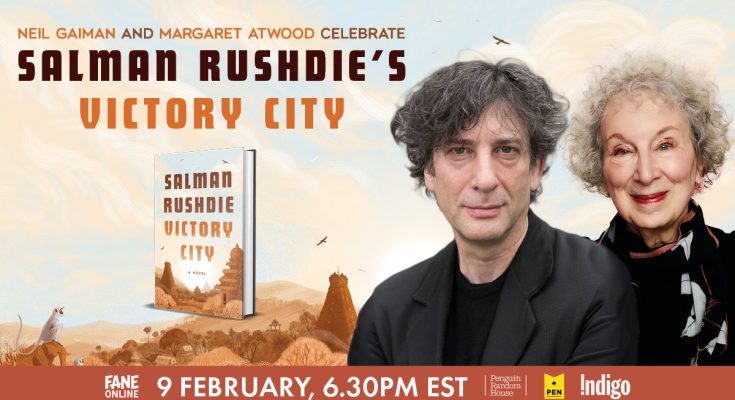 Be part of an unmissable evening celebrating the literary genius of Salman Rushdie. Two global stars of the book world, Margaret Atwood and Neil Gaiman, chaired by Erica Wagner, will be joining forces to discuss Salman Rushdie’s new novel, Victory City, with special readings by Sarita Choudhury for this exclusive online event, dedicated to the power of storytelling.

The event will be broadcast twice on February 9 at 6.30pm UK time and 6.30pm EST. It will be available to view up to two weeks after the event has ended and can be accessed Worldwide. If you live in a time zone that does not suit the initial broadcast time you can watch it at any point after the initial showing for two weeks.

If you have any questions, please email faneonline@fane.co.uk.

Victory City is an epic tale set in fourteenth-century southern India that holds a powerful message for us all now: our power is fleeting, but our stories last forever. This is Salman Rushdie at his best.

After losing her mother, nine-year-old Pampa Kampana has a divine encounter that will change the course of history. The child becomes a vessel for the goddess Pampa, for whom she was named, who begins to speak out of the girl’s mouth and grant powers beyond comprehension. The goddess foretells that Pampa will be instrumental in the rise of a great city called Bisnaga – literally ‘victory city’ – the wonder of the world.

After whispering Bisnaga and its citizens into existence, Pampa Kampana attempts to make good on the task that the goddness set for her: to give women equal agency in a patriarchal world. But all stories have a way of getting away from their creator, and Bisnaga is no exception. As years pass, rulers come and go, battles are won and lost, and allegiances shift, the very fabric of the city becomes an ever more complex tapestry.

This is a feminist fable of love, adventure and myth and a testament to the power of storytelling.

Neil Gaiman is the bestselling author and creator of books, graphic novels, short stories, film and television for all ages, including Norse Mythology, Neverwhere, Coraline, The Graveyard Book, The Ocean at the End of the Lane, The View from the Cheap Seats, and the Sandman comic series. His fiction has received Newbery, Carnegie, Hugo, Nebula, World Fantasy, and Will Eisner Awards. As Executive Producer, Neil has adapted many of his works to television series, including American Gods, Anansi Boys, Good Omens, and Sandman. He is a Goodwill Ambassador for the UNHCR and he is also a Professor in the Arts at Bard College.

Margaret Atwood is the author of more than fifty books of fiction, poetry, and critical essays.  Her novels include Cat’s Eye, The Robber Bride, Alias Grace, The Blind Assassin, and the Maddaddam trilogy.  Her 1985 classic, The Handmaid’s Tale, was followed in 2019 by a sequel, The Testaments, which was a global number one bestseller and won the Booker Prize.  In 2020 she published Dearly, her first collection of poetry in a decade, followed in 2022 with Burning Questions, a selection of essays from 2004 – 2021.  Her next collection of short stories, Old Babes in the Wood, will be published in March 2023.  Atwood has won numerous awards, including the Arthur C. Clarke Award for Imagination in Service to Society, the Franz Kafka Prize, the Peace Prize of the German Book Trade, the PEN USA Lifetime Achievement Award, and the Dayton Literary Peace Prize.  In 2019 she was made a member of the Order of the Companions of Honour for services to literature.  She has also worked as a cartoonist, illustrator, librettist, playwright, and puppeteer.  She lives in Toronto, Canada.

*please note, there are two separate delivery options for New York and non-New York based customers. Please ensure when you are booking your ticket that you choose the correct territory, or your ticket will be cancelled and refunded. Taxes may apply.

PEN America, PEN Canada and English PEN are official partners of this event.