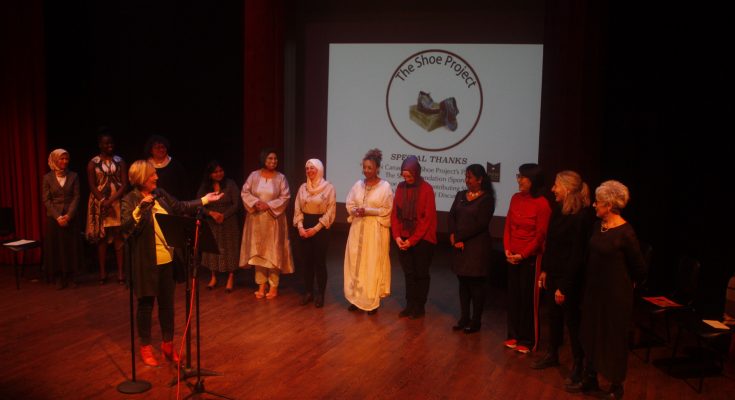 Come Celebrate with Us!

The Shoe Project returns to the stage in Toronto to celebrate the best of its stories in the past decade. This is a celebration of 10 years and over 200 women who’ve participated in workshops and performed on stage.

The Shoe Project is directed by alumna Cordelia Tang and coordinated by newcomer women in six chapters from Halifax to Vancouver. Performers are being mentored by senior theatre artists and writers.

Women from all chapters come together for the first time ever. You’ll hear from women originally from Afghanistan, Turkey, Iran, Syria, Russia, Kosovo, China, Cameroon, Tibet, and Israel, who have been coached by voice teacher Sarah Weatherwax. Filmmaker Reem Morsi will direct filming of the event where Sultans of String, 3-time Juno-nominated and Billboard charting band will perform.

Come and be inspired by our alumnae from Halifax, Toronto, Calgary, Edmonton, Canmore, and Vancouver as they share their shoe stories and successes in journeying to Canada for better lives.

Join us on Sunday September 12, at 2 pm (EDT) at Daniels Spectrum Theatre, 585 Dundas Street East, Toronto. If you can’t join us in person, join us virtually. We’ll also be streaming live.

The Shoe Project is a writing and performance workshop where immigrant women tell the stories of their arrival in Canada – through a pair of shoes. They are coached by veteran Canadian writers and theatre professionals. It is a Canadian charity founded by Canadian novelist Katherine Govier and incubated at the Bata Shoe Museum in 2011.

“Shoes accompany us on all our journeys. They say who we are, where we came from and where we are going.” – Katherine Govier