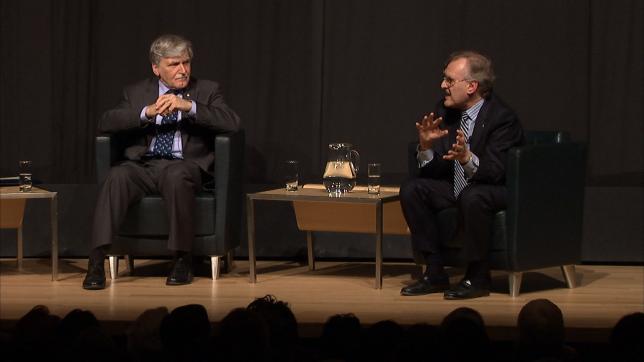 Senator Romeo Dallaire in conversation with Stephen Lewis on the eradication of the use of children as weapons of war.

On November 25, 2011, a sold-out crowd at the Royal Ontario Museum attended They Fight like Soldiers, They Die like Children, PEN Canada’s fall Ideas in Dialogue event. Sen. Romeo Dallaire spoke about the Child Soldiers Initiative (CSI) and its strategies for decommissioning more than 250,000 children in 17 ongoing conflicts worldwide. “You can’t find a more end-to-end, sophisticated, low technology weapons system in the inventory,” warned Dallaire, noting that up to 40 percent of the combatants are young girls who oversee training and logistics as well as functioning as sex slaves for adult commanders.

Stephen Lewis spoke poignantly about the difficulties of sustaining the drive to end AIDS in Africa – just a few days earlier The Global Fund, which provides half of the developing world’s HIV/AIDS drugs, had scaled back its work in Africa due to a funding shortfall.