Dear Server, I have read about your violent arrest, your trial in a military court on trumped-up charges, and the court’s sentencing you to fourteen years in one of the …

On the Day of the Imprisoned Writer, PEN Canada board member El Jones writes to Tstitsti Dangarembga. José Rubén Zamora Marroquín is a renowned Guatemalan journalist and founder of three of the most-read newspapers in Guatemala and Central America: Siglo Veintiuno, Nuestro Diario, and elPeriódico. 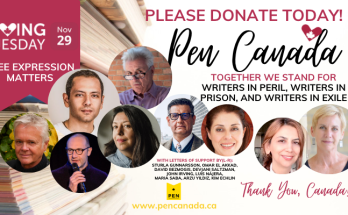 Together We Stand for Freedom of Expression This past August, the brutal attack on Sir Salman Rushdie was a chilling reminder that freedom of expression can never be taken for …