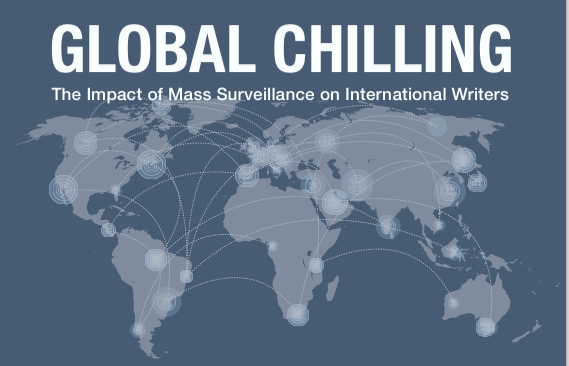 PEN American Center has released a new report demonstrating the damaging impact of surveillance by the United States and other governments on free expression and creative freedom around the world. You can view Global Chilling: The Impact of Mass Surveillance on International Writers here.

New report on the impact of surveillance on writers

An international survey of nearly 800 writers in 50 countries finds that levels of self-censorship in established democracies are surprisingly close to those in authoritarian states and fledgling democracies. Between August 28 and October 15, 2014, PEN American asked writers to evaluate the impact of government surveillance on their thinking, research, and writing, and to articulate their views of US government surveillance. The survey was carried out by The FDR Group, a nonpartisan research firm.

Mass surveillance has badly shaken writers’ faith that democratic governments will respect their rights to privacy and freedom of expression.

Key findings in Global Chilling: The Impact of Mass Surveillance on International Writers

1. Writers in democratic and non-democratic countries are equally worried about levels of government surveillance in their countries.

2. Writers around the world are engaging in self-censorship due to fear of surveillance.

3. Mass surveillance by the U.S. government has damaged its reputation as a protector of freedom of expression at home.