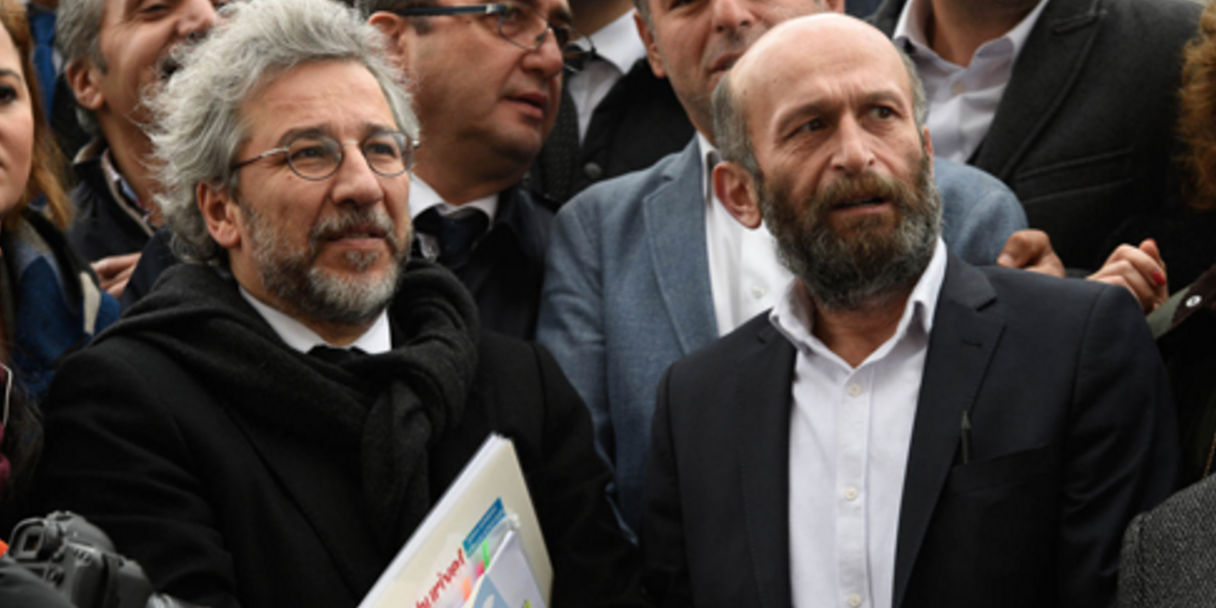 PEN International is deeply concerned that the trial of Cumhuriyet journalists Can Dündar and Erdem Gül, due to resume tomorrow, will be closed to the public and the media. The decision by the Turkish court to close their trial to the public on 25 March seriously undermines their right to a fair trial and is yet another example of attempts by the Turkish authorities to supress all critical reporting. PEN urges the court to reopen the trial to public scrutiny, guarantee due process for the defendants and ensure that the public are barred only from those sessions when state secrets are discussed.

PEN International calls on Turkey to drop all charges against the journalists immediately and unconditionally and release all those imprisoned for peacefully exercising their right to free expression and to end their crackdown on free speech.

Send appeals to the Turkish authorities:

In your letters to the authorities, please also:

We also encourage Centres and PEN members to:

***Please send appeals immediately. Check with PEN International if sending appeals after 10 April  2016. Please copy your appeals to the Embassy of Turkey in your country, asking for their comments. A list of diplomatic missions can be found here.***

** Please send us copies of your letters or information about other activities and of any responses received.**

Can Dündar, editor of the daily Cumhuriyet, and Erdem Gül, its Ankara bureau chief, have been arraigned on charges of aiding a terrorist organisation, espionage and disclosure of classified documents. The charges relate to the publication of a report in Cumhuriyet, along with video and photographic materials on 29 May 2015 claiming that Turkey’s intelligence agency (MiT) secretly armed Islamist rebel groups in Syria. According to reports, the video, now removed from the website following a court order, showed Turkish gendarmerie officials in the southern province of Adana discovering large quantities of ammunition on civilian trucks belonging to Turkey´s National intelligence Agency in January 2014.

Following the publication of the video, Erdoğan was openly critical of Dündar, accusing him and the Cumhuriyet newspaper of engaging in espionage on live television. Dündar was also subjected to fierce attacks by the pro-government media in Turkey, who accused him of treason, espionage and complicity in an international complicity against Erdoğan and Turkey. Erdoğan´s lawyer reportedly demanded two life sentences for Dündar, accusing him of ´forming an illegal organisation, crimes against the state, obtaining confidential information pertaining to national security, political and military espionage, unlawfully making confidential information public and attempting to influence a trial.

On 1 June 2015, Dündar took to Twitter to defend the paper´s actions, stating: “We are journalists, not civil servants. Our duty is not to hide the dirty secrets of the state but to hold those accountable on behalf of the people.” President Erdoğan publicly said that Dündar “will pay for this”.

Dündar and Gül were detained in November 2015 and held for nearly 100 days in Turkey’s Silivri Prison until the country’s Constitutional Court ruled that the journalists’ pre-trial detention violated their human rights. On 24 March 2016, over 100 writers from across the globe joined PEN’s call for their immediate and unconditional release.

On 25 March 2016 Judge Bülent Dalkıran, presiding over Istanbul’s 14th Court for Serious Crimes, granted prosecutors’ requests to hold the entire trial behind closed doors, on the grounds that some of the evidence to be presented related to state secrets. Defence lawyers had argued that this would contravene the journalists’ right to a fair trial, and asked that the press and the public be barred only from sessions when state secrets would be discussed. Judge Bülent Dalkıran also accepted that President Recep Tayyip Erdoğan and Turkey’s National Intelligence Agency (MIT) were joined as co-plaintiffs in the case, presenting a very real threat to the independence of the judicial process and Dundar and Gul’s right to a fair trial.

At a time when international terrorism is at the centre of everyone’s concerns, it is unacceptable that political prosecutions are used to suppress investigative reporting and exposés. The prosecution of Dündar and Gül is the latest extreme to which political use of the Turkish judicial system has been taken. Many journalists have been detained on spurious charges of terrorist propaganda and insulting President Erdogan, while economic levers have been used to put growing pressure on the media, and several draconian laws further restricting freedom of expression have been passed.