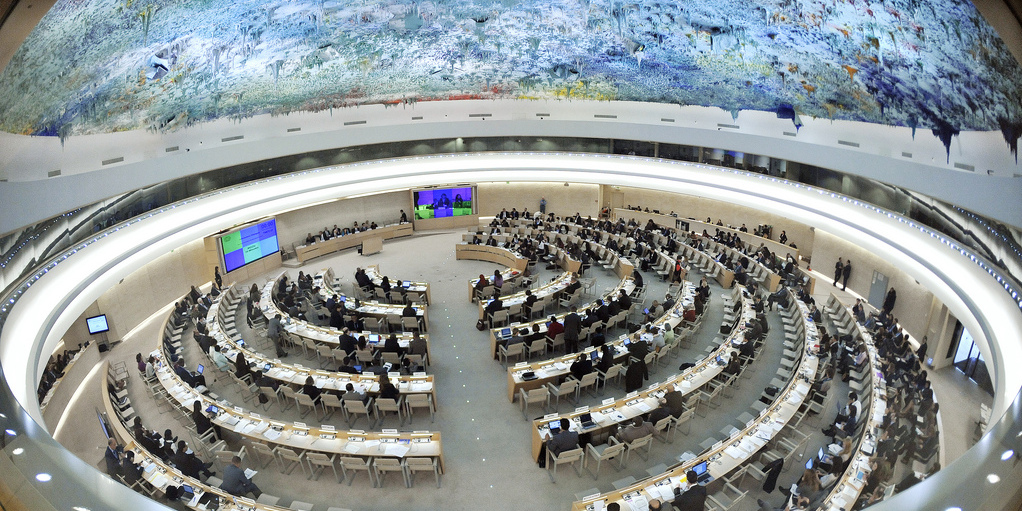 The following testimony was given to the UN Human Rights Council on June 22, 2016 following the publication of a report by the Commission of Inquiry on Human Rights in Eritrea a few weeks earlier. Aaron Berhane is a member of PEN Canada’s Writers in Exile Committee.

The Attack on Freedom of Expression in Eritrea

First of all, I would like to thank all those who helped to provide me with this opportunity to give this testimony.

I am here to speak about the attack on Freedom of Expression in Eritrea.

There has not been any freedom of expression in Eritrea ever since the country became independent in 1991. People have been arrested for distributing flyers that criticized the regime. Seniors have been thrown into jail for voicing their disagreements with the government’s land policy. Veterans have also been jailed and some of them even assassinated for organizing demonstrations to demand salaries and better treatment as war-disabled veterans. All those people who were victimized by the regime had not violated any laws, as Article 14 of the Eritrean Transitional Civil Code guaranteed their rights to express themselves. Unfortunately, they were punished nonetheless, and the merciless actions of the regime were not noticed by the international community then.

It is under such circumstances that the Eritrean press law was issued in June 1996. The first independent newspaper—Setit—emerged in August 1997, and a number of other independent newspapers followed suit a few months later. As Co-founder and Editor-in-Chief of Setit, I was optimistic that the press law, despite its vagueness and some shortcomings, would guarantee the freedom to express ourselves in writing.

However, I was wrong. We were not allowed to operate our newspaper freely. During this short period when we supposedly were granted free speech, we faced several challenges from the government. The main obstacles we faced were: being denied access to information; being denied the right to form an association of journalists; threats from the government; summons to the police station; censorship; and imprisonment.

Let me give specific examples of how freedom of expression was attacked in Eritrea by the country’s regime.

Independent journalists were denied the right to form an association, threatened by the government, summoned to the police station,  censored and imprisoned.

According to Proclamation No. 90/1996 or The Press Proclamation of Eritrea, “A journalist shall have the right to obtain news and information from any official or unofficial source and disseminate the same after verifying the truth thereof.”

This principle only existed on paper. We experienced grave difficulties in trying to obtain information from government officials. Following instructions from the President’s office, they routinely and systematically refused interviews. They usually responded to queries by telling us to return the next day. And when we did as told, they then informed us they had passed our request to their superior. When we approached their superior, they would tell us that they had passed the request to their own superior.

When we wanted to write about the housing crisis issue, land distribution, trade—anything—even when we asked about very minor issues that should have been addressed by the department head or a minister, the questions went to the President’s office. Often the issues about which we wanted to write would become so outdated that we were forced to move on and cover something else. This was the routine manner by which they deliberately denied information.

Prohibiting the Association of Journalists

We, the independent journalists in Eritrea at the time, co-operated among ourselves extremely well. This was because we often found each of us faced challenges very similar to one another. In order to protect ourselves and expand our network with international media, we began planning to form an association of journalists. We submitted our application and pleaded with the Ministry of Information to allow us to form such an association, but the Ministry refused. This was despite our having the legal right to form an association.

The four-year period from 1997 to 2001, during which the independent newspapers operated, was very difficult. This was particularly true after the two-year border conflict with Ethiopia ended in 2000. We attempted to exert pressure on the government to implement the constitution, fight corrupt generals, focus on education, improve health care, and review the land and investment policy. We were doing our best to let the public know what was going on by disclosing the wrongdoings of the government.

Of course, the government officials were not happy with the content of our articles. It was then that we began facing intimidation and receiving phone threats so frequently from the Ministry of Information, as well as from senior officials of the People’s Front for Democracy and Justice) and very often from the government spokesperson, Yemane Gebremeskel. Such threats were a part of our daily routine and they resulted in tremendous psychological stress for us.

The tipping point came in June 2001, when intimidation and harassment of the free press escalated. Enforced and unjustifiable conscription became common. Interrogation and arrest of journalists became standard practice.

Another source of tremendous stress was censorship. For about a year, the Ministry of Information ordered us to submit all the content we wished to print in upcoming issues of our newspapers. And the Ministry decided what should be printed and what should be omitted. Any sentence that criticized government officials or government policy was cut from the article. Sometimes the entire article or a piece of reporting had to be discarded. And they sternly warned us not to write or print such articles for our newspaper. It was a painful process because every editor had to deal with the regime every single day, even for the most trivial things. The government’s intention for imposing censorship was to discourage us from covering stories that disclosed information about the corrupt administration. We were prohibited from challenging the regime in the hopes that we would in the end give up publishing the newspaper.

Summons to the Police Station

Once the government realized the publishers’ determination not to stop printing the newspapers, it lifted the censorship process. We were no longer required to show the Ministry of Information what we intended to publish. Instead, the regime started to harass us by using its police force and security agents to make our lives even more miserable.

The tipping point came on June 5, 2001, when we published an open letter by 15 senior government officials (known as the G-15) in Setit. The G-15 criticized the president and called for democratic reforms. The intimidation and harassment intended to block the free press escalated. Enforced and unjustifiable conscription became common. Interrogation and arrest of journalists became standard practice.

It was a routine matter for me to be summoned by the police once or twice a week to answer trivial questions, such as “What are you trying to say in this line? What do you mean? Where did you get this information? Why are you writing this story while the country is at war?” (The country wasn’t at war at the time, but the government used to harass journalists by using war as an excuse.)

To make matters worse, the National Security Agents used to intimidate us by knocking on our doors at night or pointing guns to our ribs. I personally experienced this at the beginning of September 2001 when I wrote an editorial on how a fight between two elephants ruins the grass. In it, I pointed out that the fight between the president and the G-15 would cause the suffering of our people to escalate, and I criticized the president for not responding to the requests of the reformers. I was given a final warning by two agents that if I kept criticizing the regime, I would be publishing my last byline.

It was very difficult for all independent journalists to do their work. However, all the journalists were as determined as before and shied from reporting the truth – that is, until their most basic rights were finally seized.

Though the sporadic jailing of journalists was common in Eritrea, the arrests that changed the landscape took place on September 18, 2001. The president ordered all seven independent newspapers to cease publication. That same day, the government arrested eleven of the fifteen senior officials who had criticized the president in the aforementioned open letter. In the days that followed, nine journalists were arrested and many more followed in the subsequent days. Luckily, I was not at home the night they came for me. I managed to evade the regime’s tightening grip.

The accusations levelled against the journalists were astounding. The government media blamed us for violating the press law, collaborating with the enemy, evading national service and receiving funds from foreigners—all baseless accusations. If they had been true, the government could have laid such charges against the jailed journalists, but to date, it has not. The journalists have remained imprisoned without due process since 2001. Five of them have been confirmed dead and nobody knows the fate of the others. However, since they have been held in shipping containers in Eiraeiro (a secret prison camp for high-level political prisoners with an average temperature of 40 degrees Celsius), their fate is, sadly, all too predictable.

The Eritrean government has not stopped attacking the independent press. It also has attacked those journalists who work for the government. Several journalists have been arrested since 2001. For example in February 2009, seven journalists of Radio Bana, the radio that was run by the Ministry of education, were arrested. No charges were filed against them. Fortunately, they were released on January 23, 2015 – six years later – without any explanation.

Still, we do not know the whereabouts or the mental and physical state of 17 journalists. Their family members and friends have also been targeted. My brother and cousin were arrested for two years as a reprisal for what I did. The wives and parents of the journalists were interrogated and harassed. Their relatives still live in an open prison in constant fear. In Eritrea, it is not only risky to be a journalist, but it is also risky to be a relative of a journalist. The authorities of the regime try to attack the spirit of freedom of the press through every angle so as to discourage others from picking up the torch. Moreover, the attack of the press was an attempt to stamp out criticism of the Eritrean government for not implementing the constitution and to put an end to political dissenters, thereby prolonging its power.

Eritrea has banned independent media, arrested about 30 of them without due process of law, and forced 50 others to flee the country,

In May 2007, the African Commission on Human and People’s Rights (ACPHR) of the African Union ruled that the detention of journalists in Eritrea had been arbitrary and unlawful. They called on the Eritrean government to release and compensate the detainees. The Commission of Inquiry of Human Rights in Eritrea has found crimes committed against journalists and humanity in general, and is calling the Security Council to refer Eritrea’s case to the International Criminal Court.

To sum up, the Eritrean government has banned all independent media, arrested about 30 journalists without due process of law, forced more than 50 journalists to flee the country, and still subjects the family members of the journalists to harassment, forcing them to live in constant fear.

It is not without reason that Eritrea ranked first on the list of the most censored countries compiled by the 2015 Committee to Protect Journalists, and ranked last in the Reporters Sans Frontierès World Press Freedom index. Eritrea is a living hell for its citizens, particularly the journalists who have done nothing but uphold truth.

Aaron Berhane is a co-founder and former editor-in-chief of Setit, Eritrea’s now banned largest independent newspaper, in September 2001 he escaped arrest during a crackdown on the independent media by fleeing to Sudan, and subsequently settling in Toronto.  He is a member of PEN Canada’s Writers in Exile Committee.