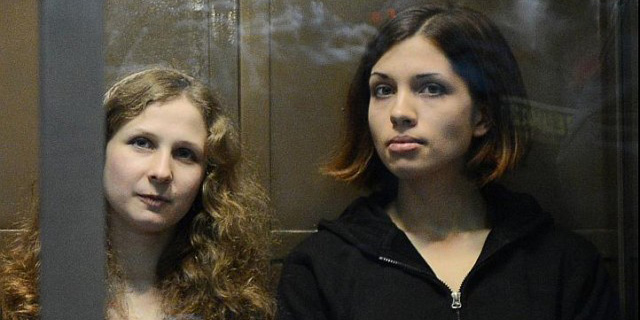 PEN Canada’s Writers in Prison Committee welcomes the release of Nadezhda Tolokonnikova and Maria Alekhina of Pussy Riot. They were granted amnesty for the 20th anniversary of the Russian constitution and released December 23, 2013, several weeks before the end of their two-year sentence.

Tolokonnikova and Alekhina were both convicted of “hooliganism motivated by religious hatred’” in August 2012. The PEN Resolution on the Russian Federation demanded their immediate release and that charges be dropped. However, President Vladimir Putin stated that the amnesty granted “is not a revision of the court’s decision.”

PEN renews its call for the Russian government to repeal its anti-free expression laws. In the past 18 months, defamation was recriminalized while the “propaganda of non-traditional sexual relationships”, and the “religious insult law” were passed.

Tolokonnikova, Alekhina, and fellow Pussy Riot member Katerina Samutsevich are honorary members of PEN Canada. In November 2012, PEN Canada launched a street photo campaign to recognize them on the international day of the imprisoned writer and we have continued to campaign actively for their full release.