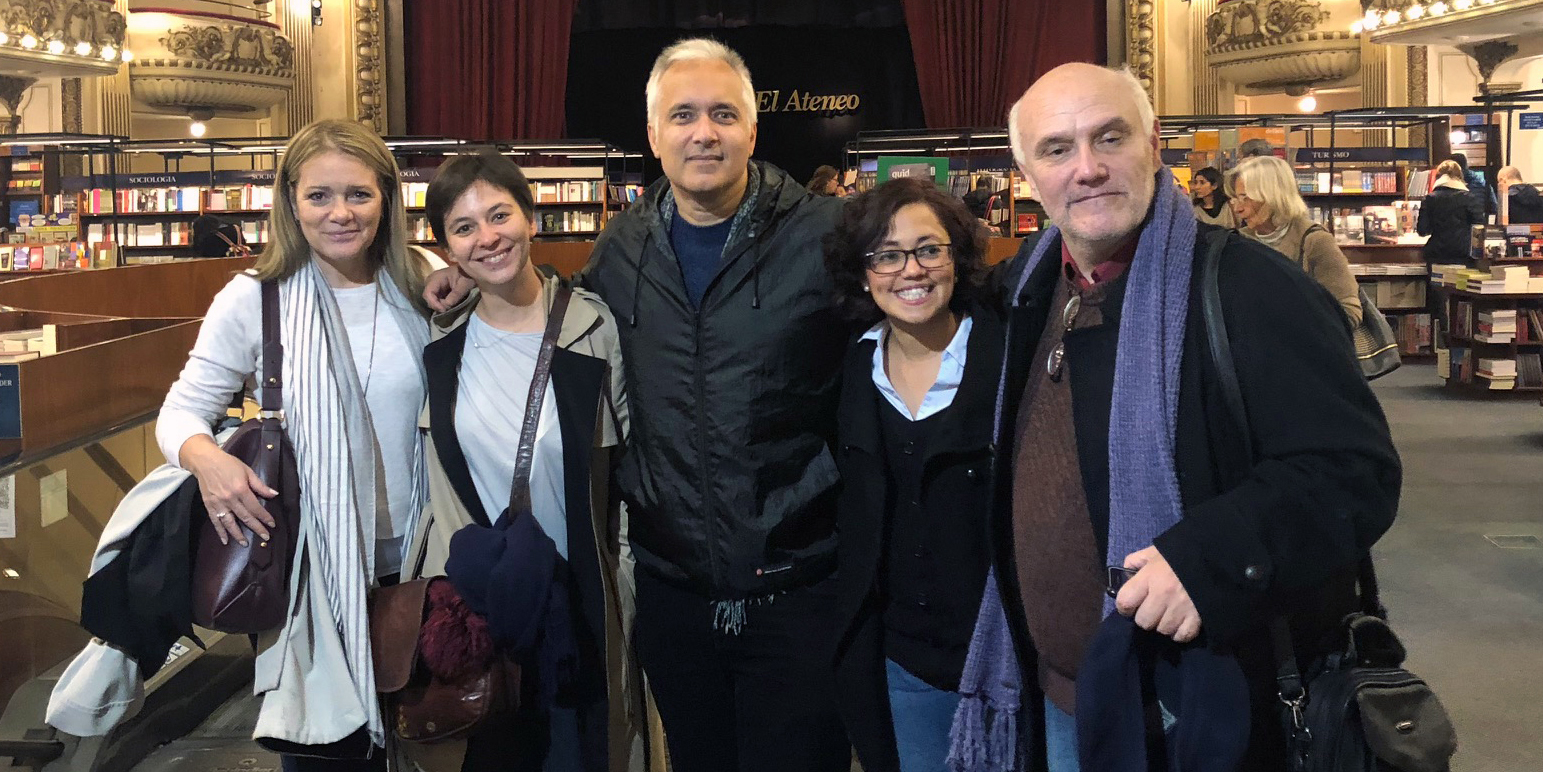 PEN staff, along with the PEN board of directors, welcome long-time staff member Brendan de Caires in his new role as Executive Director. Brendan has contributed much to PEN over the years and to share a little about his previous work, his vision and depth of literary knowledge we asked him a few questions. Enjoy!

1. You’ve now worked at PEN for 10 years, what has kept you here?
After a difficult year of job hunting, Ellen Seligman and Marian Botsford Fraser hired me in October 2008. Not long before, I’d moved to Toronto from New York after two years of raising my young children. It was a relief to have an office job again, but shortly afterward PEN Canada succumbed to the aftershocks of the financial crisis. Funding plummeted, staff were laid off, and the office was closed while a caretaker board did what it could to prevent us from going under. During that year I decamped to the University of Toronto, working with Diana Kuprel, a former board member.

Through the years I’ve remained a true believer in our mission because the defence of free speech is in my blood. My father quit a 30-year legal career to open an independent newspaper in Guyana. That was foolishly brave and certainly shortened his life, but it also taught me and my sister how valuable a free press can be, particularly when a society is inching towards democratic norms. Many parts of the Americas still have nominal rather than functional democracies and the role of free speech in changing this has never been lost on me.

In the few months before our offices closed in 2009, I played a role in relocating Jiang Weiping to Toronto. His subsequent impact could be a case study on the power of the written word to affect the wider world. Over the years I’ve met other writers and journalists whose tenacity has altered their societies. Although I never had the chance to meet him, Liu Xiaobo was a perfect example of what an unyielding intellect can do to outmanoeuvre its persecutors. Near the end of his final public statement, Liu writes “Freedom of expression is the basis of human rights, the source of humanity and the mother of truth. To block freedom of speech is to trample on human rights, to strangle humanity and to suppress the truth.” That’s what I’ve always felt, poetically expressed.

2. In those years you held several different positions within the organization, seen it through some triumphs and some disheartening moments – where is PEN today and where do you hope it will be in the coming years?
We are in better shape than we were when I started, thanks to the many talented people who have pitched in to guide us through the difficult years. Like anyone else at a small NGO I’ve had doubts about our relevance, worried about mission creep and sustainable funding, and I’ve often felt the yearning for a greater impact. But I’ve also seen our work change lives. If nothing else, we have contributed to the early release of dozens of imprisoned writers and we have called attention to and helped to alleviate the threats that face hundreds more.

I’ve learned that PEN’s power is inseparable from solidarity. We are a genuinely global organization and our lack of partisan interests gives us a unique moral power to address freedom of expression crises in any part of the world. Recently we have focused more on the Americas, partly because I have sufficient Spanish to collaborate with other centres but mostly because I think it makes more sense to act regionally. It was hugely encouraging, for example, to help establish the PEN Centre in Honduras, and to support their annual prize for investigative journalism.

Over the next few years, I’d like us to build on this work and deepen our engagement with the Americas. It’s hardly news that problems like impunity are difficult to address, but the people on the front lines of these problems are shamingly grateful for the modest support and encouragement that we offer. I’ve just returned from a PEN meeting in Buenos Aires at which several countries – among them Colombia, Guatemala, Honduras, Nicaragua and Venezuela – told harrowing stories and showed footage of terrible violence. But we also had meetings on PEN’s pathbreaking Women’s Manifesto, its equally impressive Girona Manifesto on linguistic rights, and there was a whole evening dedicated to an anthropologist who had revived vanishing indigenous languages. The readings and songs in languages like Mapuche and Guarani were mesmerizing, especially since the few remaining speakers of some of the languages were at least seventy-five years old. I’d like our centre to be part of similar projects so that we are not always focused on what’s wrong with the world but also part of trying to set it right again.

3. What has been one of the most memorable moments in your work so far with PEN?
Like many PEN colleagues, my personal highlights have mostly been the releases of Honorary Members who were long-term prison sentences: Zarganar, Parvez Kambakhsh, Normando Gonzalez, Hossein Derakhshan, Eskinder Nega. It’s also been an honour to support heroic figures like Nasrin Sotoudeh and Lydia Cacho, and to be in the room when certain writers have had their asylum claims approved. But if I had to pick one, it would be our security training workshop last year in Guatemala. That was an epiphany for me. The participants were all young indigenous women, unimaginably brave, who persisted in dangerous jobs even though their families and communities had endured unspeakable horrors during the civil war. It was an enormous privilege to be part of anything that helped make their lives a little safer.

4. If PEN Canada was a book, which one would it be?
That’s easy: Ulysses. But my answer says more about me than it does about PEN. As I’ve grown older I’ve come to believe that nearly everything has been anticipated by Ulysses. In Tom Stoppard’s Travesties, someone asks the great man: “What did you do in the Great War, Mr. Joyce?” He replies: “ I wrote Ulysses. What did you do?” PEN itself started just after the First World War and from the very start it shared Joyce’s convictions about the power of words to expand and alter a culture. As I understand it, PEN’s global mission has a comparable scope to Ulysses even if we are trying to carry it out with somewhat less exalted human resources. Tristamente the work often feels like the Ithaca episode, replete with faux-naive questions and comically tedious answers, but it is also leavened by humour and often animated by a strong sense of fairness and inclusivity. It also affords intimate glimpses into the lives of extraordinary people who – at first glance – seem quite normal.

5. Name the last four books you’ve read, and what you are currently reading?
As luck would have it, my current list will seem impossibly learned, or pretentious, or both. I’ve just finished Proust’s In Search of Lost Time (in the modernized Kilmartin translation) after years of procrastination. The experience was considerably improved by Malcolm Bowie’s erudite and beautifully written Proust Among the Stars. At the same time, I’ve been wrestling, yet again, with Heidegger’s Being and Time – it has defeated me several times  – because everyone else that I read keeps returning to it. I’m also reading René Girard’s Deceit, Desire and the Novel which I was led to by Ryan Holliday’s compelling account of the Gawker trial in Conspiracy: Peter Thiel, Hulk Hogan, Gawker, and the Anatomy of Intrigue and I’ve just finished Richard Flanagan’s First Person, which I thoroughly enjoyed. The Canadian book that I’ve most enjoyed reading this year was David Chariandy’s Brother.