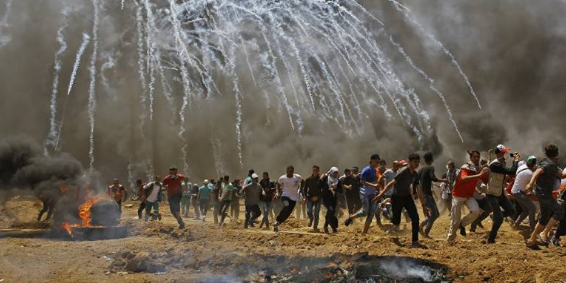 May 16, 2018 – PEN International strongly condemns the use of excessive force against protestors and journalists by the Israeli forces earlier this week. According to recent reports, at least seven Palestinian journalists were injured by Israeli gunfire while covering demonstrations in Gaza. The protests were linked to the decision of the President of the United States, Donald Trump, to recognize unified Jerusalem as the capital of Israel and move the US Embassy there.

Among the injured journalists were Omar Hamdan, Mohammed Abu Dahrouj, Abdullah al-Shorbagi, Farhan Hashem Abu Hadayd, Yasser Qudeih, Nihad Fuad and Wael Dahdouh (click here for more information). Furthermore, 60 demonstrators are reported to have been killed and 2,700 injured when Israeli troops opened fire against Palestinians and other supporters who were protesting in the West Bank and Gaza Strip.

Jennifer Clement, President of PEN International said: “The images and stories from Gaza are shocking and deeply upsetting.  Israel should fully respect the Palestinians’ right to freedom of expression and assembly in line with its international obligations and ensure the protection of journalists.”

On 14 May 2018, members of PEN Palestine as well as other journalists and demonstrators also reported being harassed by Israeli soldiers during a peaceful sit-in at Bab al-Amoud, near the new US Embassy building in the old Jerusalem.

Carles Torner, Executive Director of PEN International said: “Transferring the US Embassy to Jerusalem is clearly a violation of international law and works against any form of peace process. This attack and the needless loss of life must be investigated fully and appropriate action taken to bring to justice those responsible.”

In its previous statement, PEN International also condemned the targeting of journalists in December 2017, while reporting on previous protests against the decision of President Trump to relocate the US Embassy.