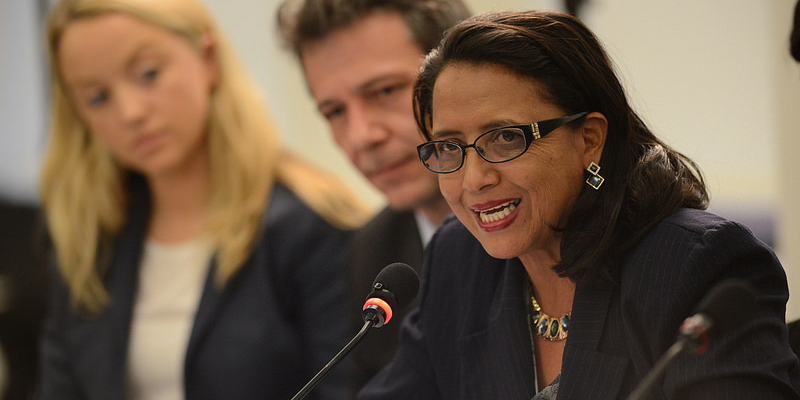 Honduras must do more to protect journalists, urge writers at the Inter-American Commission on Human Rights

“In our America, to assassinate a journalist has the same consequences as to put on leather shoes or to sit in a chair: none,” said award-winning Mexican novelist, Álvaro Enrigue, addressing representatives of the State of Honduras. His testimony was part of a presentation by PEN Canada, PEN International, and the University of Toronto’s Faculty of Law’s International Human Rights Program (IHRP), which highlighted the rising scale of violence against journalists in Honduras and the impunity that allows perpetrators to go unpunished.

Enrigue and Honduran journalist and human rights defender Dina Meza joined PEN and the IHRP in presenting the findings and recommendations of the organizations’ recent report directly to representatives of the Honduran government. The report – Honduras: Journalism in the Shadow of Impunity – published in January 2014, examines the surge in violence against journalists who cover organized crime, government corruption, and other sensitive issues and who increasingly face threats and lethal attacks with almost complete impunity for perpetrators.  Since the June 2009 coup, at least 32 Honduran journalists – most working for the broadcast media – have been killed, yet the vast majority of these killings remain unsolved.

“Journalists are threatened, harassed, attacked and murdered, sometimes in circumstances that strongly suggest the involvement of state agents,” said Brendan de Caires, PEN Canada’s lead researcher in the report. “This has had a devastating impact on the right to freedom of expression since violence against journalists often silences coverage of topics such as corruption, organized crime, drug trafficking and political reportage.”

Dina Meza, subjected to harassment and threats since 2006, told the Commission:

“To practice journalism in a country with high levels of impunity, where they do not investigate crimes, threats, persecution, and other forms of repression against journalists is to write with a gun pointed at your head. It is to walk the line between life and death. The perpetrators know they act with impunity and because of it they continue.”

The key findings are grounded in the failure of the Honduran government to meet its legal obligations to protect the right to life, the right to judicial protection, and freedom of expression as required by the American Convention of Human Rights, said Carmen Cheung, Acting Director, International Human Rights Program, University of Toronto Faculty of Law. “These breaches are the result of its ongoing failures to prevent, investigate, punish, and provide redress for violence against journalists.”

“Why does an organization of writers come to you with this report, and with these deep concerns for Honduras?” asked Marian Botsford Fraser, Canadian writer and journalist, and Chair of PEN International’s Writers in Prison Committee. “Because this culture of impunity slowly, insidiously, squeezes the life out of all other forms of culture.”

Commissioner and former IACHR president José Jesús de Orozco echoed PEN’s concerns, and emphasized that the IACHR was particularly troubled by the vulnerability of journalists. The Honduran representatives agreed that violence against journalists was a significant concern, but did not acknowledge that they were especially vulnerable given their profession.

PEN Canada is a nonpartisan organization of writers that works with others to defend freedom of expression as a basic human right, at home and abroad. PEN Canada promotes literature, fights censorship, helps free persecuted writers from prison, and assists writers living in exile in Canada. www.pencanada.ca

PEN International promotes literature and freedom of expression. Founded in 1921, our global community of writers now spans more than 100 countries. Our campaigns, events, publications and programmes aim to connect writers and readers wherever they are in the world. PEN International is a non-political organization which holds Special Consultative Status at the UN and Associate Status at UNESCO. www.pen-international.org

The International Human Rights Program (IHRP) at the University of Toronto Faculty of Law enhances the legal protection of existing and emerging international human rights obligations through advocacy, knowledge-exchange, and capacity-building initiatives that provide experiential learning opportunities for students and legal expertise to civil society. ihrp.law.utoronto.ca