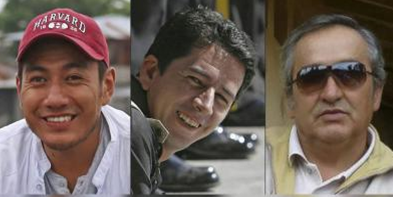 17 April 2018 – PEN joins its Latin American colleagues in condemning the killing of three employees of Ecuadorian daily newspaper El Comercio and calls on the Colombian and Ecuadorian authorities to carry out a prompt and thorough investigation and bring the perpetrators to justice.

Journalist Javier Ortega Reyes, aged 32, award-winning photographer Paúl Rivas Bravo, aged 45 and their driver Efraín Segarra Abril, aged 60, were kidnapped on 26 March 2018 in Mataje, Esmeraldas province in Ecuador, close to the border with Colombia. The team were in the area carrying out investigations into a wave of violence that had reportedly been spreading across the area since January 2018.

On 13 April 2018, Ecuador’s President Lenín Moreno confirmed their deaths. According to media reports, Frente Oliver Sinisterra – a dissident group connected to the FARC (Revolutionary Armed Forces of Colombia) – claimed responsibility for their abduction and had demanded the release of three prisoners associated with the group in exchange for the lives of the journalists. The journalists were killed in Colombia, according to a statement made by Colombian President Juan Manuel Santos.

The presidents of both nations have condemned the murders and committed to apprehending those responsible. The authorities are thought to be working on reclaiming the bodies.

PEN calls on the Ecuadorian and Colombian authorities to make good on their promises to bring those responsible to justice.