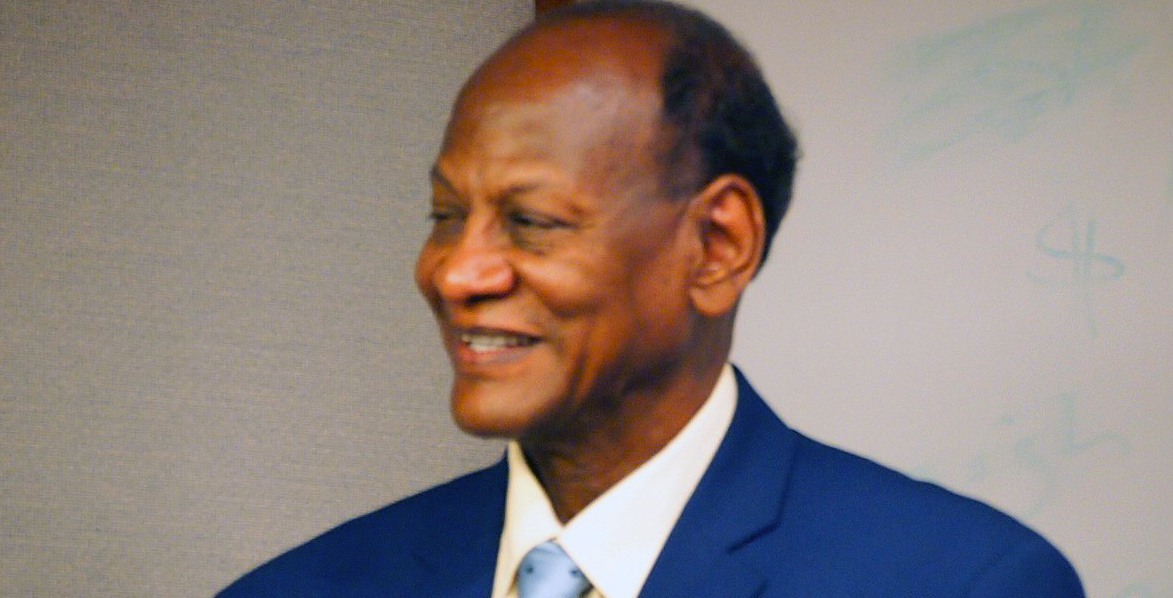 In the fall of 2019, PEN Canada collaborated with Ryerson’s Community Engaged Learning & Teaching (CELT) initiative and Literatures of Modernity graduate program in the Faculty of Arts to bring members of our Writers-in-Exile network into the classroom. Students interviewed the writers about their work and asked how their cultural and religious backgrounds had affected their freedom of expression. In the following post the students who interviewed Bushra el-Fadil share their reflections on the experience.

Bushra el-Fadil is a Sudanese poet, short story writer, and novelist whose evocative and lyrical prose has garnered him many honours over the course of his prolific career, including the prestigious Caine Prize for African Writing in 2018. Through PEN Canada, our graduate class had the honour of interviewing El-Fadil and facilitating an in-depth conversation regarding his experiences as a refugee writer, the intricacies of his writing process, and his artistic philosophy (what he calls his “theory of everything”). The author moved to Canada in 2018, received refugee status in 2019, and will soon apply for family reunification to bring his loved ones to Canada. He is fluent in Arabic, Russian, and English, and holds a PhD in Russian Language.

In February of 2018, El-Fadil gave a speech for the Library of Congress during which he was introduced as an “African Literary Ambassador.” When we ask how he feels about having been granted this title, El-Fadil laughs. He does not consider himself an African Literary Ambassador, he says, and explains that this role would be an impossible one for him to fulfill. He posits that younger authors and poets, whose work is well known in other parts of Africa, may be better situated to satisfy this expectation. These are writers who have what he calls “stronger communication,” the ability to use modern technology to reach a larger audience, and therefore garner a larger cultural impact. Despite his belief that the younger generation is better suited to take on this ambassador role, El-Fadil notes these awards and titles help bring older stories in different languages to wider audiences, and may serve as a bridge to build communication with Western readers.

When we inquire about this idea of communication between Sudanese and Western literary traditions, El-Fadil acknowledges that there are many amazing writers in Sudan, but notes that the strong influence of Western ideologies has created a kind of hierarchy in Sudanese literature. It is this Western influence, the author suggests, that leads to the uplifting of Sudanese authors who write in a recognizably Western style, and the tendency to relegate those who do not to the fringes of the literary scene. According to El-Fadil, in Sudan, “Heritage helps [navigate these tensions] because you find so many cultures before and after Islam: language carries on without interruption until now. When [Islamic religion] came to Sudan, new words and culture came to the Arabic language.” El-Fadil notes that University education in Sudan is not free from this Western literary influence either.

When we ask about his unique use of genre, and his remarkable ability to move seamlessly between different literary forms, El-Fadil notes that he uses fantasy in his work to navigate and subvert the rules in his country. He explains that realism is, in many cases, not an option: if he were to write directly about the reality of the political climate in Sudan, he says, he would likely be put in prison. El-Fadil goes on to explain that poetry, above all else, is an intimate, personal mode of expression for him, closely connected to his childhood and his relationships with other people.

El-Fadil states that extended family is extremely important in Sudan, explaining that having a large family allows one to come to terms with their unique position in the universe. This is his philosophy when it comes to literature, his “theory of everything”: he describes how minimal the individual human experience is, stating that we mean nothing to the universe. El-Fadil uses his literary work to explore what he calls the literary “theory of everything.” He states that his goal is to create an all-encompassing literary theory that explains the inherent need within human society for storytelling. Using his own life as evidence, El-Fadil explains that inspiration strikes in a fraction of a second, giving him the idea to write a story.

This immediate inspiration, for the author, is proof that the human brain inherently creates narratives and that the literary theory of everything exists. This ideology is present in his own literary work, such as in “Phosphorus at the Bottom of the Well,” where he explores the existential nature of the main character, Sa’ad — who after leaving his country to travel the world, returns to his native land and is haunted by memories of home, family, and exile. He explains that travel and migration inherently change the way people experience life and communicate with one another. From the Sudanese village he grew up in to the cities in which he has lived as a writer, El-Fadil believes that place has always influenced his work, and that his interactions with different settings, peoples, and cultures will always shape the way he tells stories.