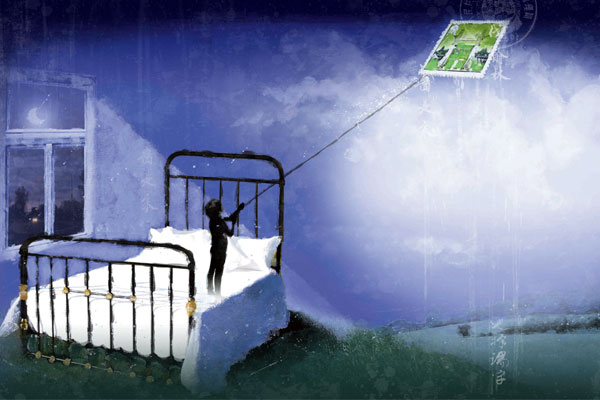 The Stamp Collector is a picture book about a boy who collects stories and a boy who collects stamps. They meet as teens when the stamp collector leaves school to take a job as a prison guard and the storyteller is sent to prison for writing a short story. Written by U of T News Editor and University College alumna Jennifer Lanthier with illustrations by Francois Thisdale, The Stamp Collector was published by Fitzhenry and Whiteside in October 2012 in Canada and the United States. A French translation is now underway.

The United States Board on Books for Young People has named it an Outstanding International Book and the International Reading Association named it a Notable Book for a Global Society. It was a finalist for the LIBRIS awards of the Canadian Booksellers Association and for the Amelia Frances Howard-Gibbon Illustrator’s Award of the Canadian Library Association. And it won the Crystal Kite Award for best children’s book published in the Americas in 2012 from the SCBWI (Society of Children’s Book Writers and Illustrators).

In April, Lanthier received the Ezra Jack Keats Emerging Writer Honour Award from the Ezra Jack Keats Foundation for The Stamp Collector and in June she received the Huguenot Society Award from the Ontario Historical Society, honouring the best book or substantial article published in Ontario in the past three years which has brought public awareness to the principles of freedom of conscience and freedom of thought. U of T News spoke with Lanthier about the book.

How did you come to write The Stamp Collector?

It’s an unusual subject for a picture book but the inspiration came from a very real encounter I had with the exiled Chinese writer Jiang Weiping at the offices of PEN Canada in 2009. He had just been released from prison where he was sent for a series of investigative articles describing the activities of Bo Xilai, then a very powerful government official.

Weiping told us that, in a Chinese prison, the guards are given no information about prisoners or their crimes; the prisoners might be thieves or murderers or poets. He told us that we should write to the imprisoned writers but we should know that the letters would never make it to them – only the guards would see them.

Most students have heard a great deal about raising money or awareness to fight diseases or build wells or schools in impoverished countries but they have heard little about human rights and/or freedom of expression.

Someone asked: then why write? And Weiping replied: because the guards collect stamps.

The idea that stamps from other countries could tell a story without words was powerful. So was the notion that a sympathetic guard might be moved to treat a prisoner less harshly once he realized the prisoner was a writer.

I left that meeting and spent the next three days writing The Stamp Collector.

Some of the proceeds go to PEN Canada – are you also using the book to raise awareness for PEN?

I’ve taken the book into libraries and classrooms for writing workshops and presentations, and I talk a lot about PEN and freedom of expression. It works well with students from about age eight to 18. They are fascinated to learn about all the groups that work to protect writers, journalists, and bloggers around the world. They are appalled to learn that Nobel laureate Liu Xiabo is still serving time in prison for writing seven sentences. They cannot believe how many journalists have been killed in Mexico.

Most students have heard a great deal about raising money or awareness to fight diseases or build wells or schools in impoverished countries but they have heard little about human rights and/or freedom of expression.

I also recently returned from travelling through Labrador on behalf of the Canadian Children’s Book Centre and the Canada Council for the Arts, as part of the TD Canada Children’s Book Week. It’s a fantastic national program that sends authors, illustrators, and storytellers across the country every year to share stories and art with kids, parents, and teachers in schools and libraries. It was a great privilege to share the book with them and to see the stories and drawings they created in response. (You can listen to the interview with CBC’s Labrador morning here.) My daughter Nicola, a Trinity College undergraduate who’s studying Cinema Studies and English, travelled with me and shot the documentary above.

Isn’t the subject too dark or complex for kids?

I find the younger you are, the simpler it is to grasp the concept. Grownups tend to get side-tracked. They want to know exactly what the writer said that got him thrown in prison; could he have been more polite? The kids have no trouble getting to the heart of the matter: that nobody should go to prison for something they write.

What moves me the most is the compassion these kids show in their own writing for both the writer and the guard. They understand the characters’ loneliness, their desire to have their voices heard, and they understand that a truly happy ending is not possible here.

But they also see the hope.

And the book has done well?

The response has been largely word of mouth but it’s been phenomenal. Teachers, librarians, booksellers, and other writers have been incredibly supportive.

Margaret Atwood read the book and tweeted about it: “magic kids book on power of story in repressive regimes”. Yann Martel read it and generously gave this comment for the cover:  “A darkly luminous tale about the power of stories and the bonds of empathy they can weave.”

A friend from my undergrad days (former Varsity Editor B.J. Del Conte) sent a copy to the filmmaker Graham Yost (creator of Speed and Justified) and Yost sent a blurb for the back cover. And Heather Reisman made it a “Heather’s Pick” at Indigo and Chapters.

It didn’t receive many reviews but those it did receive were kind.  CBC’s Metro Morning also had me on to talk about the book during Freedom to Read Week and it was a great thrill to sit across from Matt Galloway, to whom I listen every morning.

But it’s important to remember that this is a picture book, so although the story was mine, this book belongs equally to Francois; the artistry and power of his illustrations are key.

Were you involved in the illustrations?

The artist who brought this story to life was Francois Thisdale, who was nominated for best illustrator of the year by the Canadian Library Association for his work on The Stamp Collector – and he is a brilliant artist so all I had to do was stay out of his way. This was the first time I’d ever written anything that would be illustrated and I was terrified. But the very first art I saw was a two-page spread that depicts both the writer and the guard, with prison bars behind the guard that become birch trees behind the writer. It was the most arresting and beautiful image I could have imagined and I knew then that the art would be perfect.

My publisher, Fitzhenry & Whiteside, had postcards made from some of his art and I brought them with me to Labrador and to every school I visit, along with the mailing addresses of three imprisoned writers. Teachers and students can act out the story, sending their own messages of hope and encouragement to Nurmuhemmet Yasin and Liu Xiaobo in China and Nasrin Soutodeh in Iran. I love the idea that Francois’ art is travelling around the world, bringing hope to writers in prison.