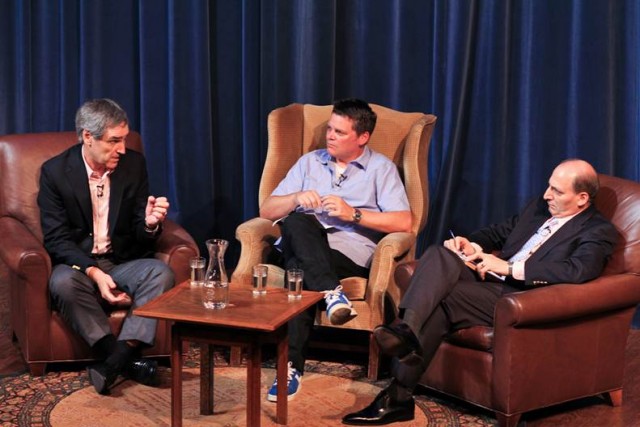 On Sept. 22, 2011 a sold-out crowd attended Liberty and the Arab Spring at the George Ignatieff theatre in Toronto. The event, co-hosted with the Department of Political Science at the University of Toronto, was the latest in PEN Canada’s Ideas in Dialogue series.

The conversation was about the relevance of political philosopher Isaiah Berlin’s ideas to emerging democratic movements in North Africa and the Middle East. The discussion involved two of Berlin’s best-known students – former Liberal leader Michael Ignatieff, and U of T political science professor, Ramin Jahanbegloo – and was moderated Professor Mark Kingwell.

Also onstage was PEN Canada’s Empty Chair, dedicated to Iranian human rights lawyer Nasrin Sotoudeh. Towards the end of the evening, responding to a question about the importance of civil society, Ignatieff told the audience, “Don’t think there is nothing you can do. Join PEN. Write the President of Iran. Keep her name up there. This stuff matters. You’re not just spectators here. She needs your help.”

The event aired on TVO’s Big Ideas in the fall. Click to view the video.

IN THE MEDIA:
Ich bin ein Berliner: Ramin Jahanbegloo discusses monism, the Arab Spring, and Isaiah Berlin
The Varsity, Sept. 25, 2011
Isaiah Berlin has been called one of the greatest political thinkers of the 20th century. He contributed extensively to the history of ideas, and highlighted the relationships between men and their institutions … read more.