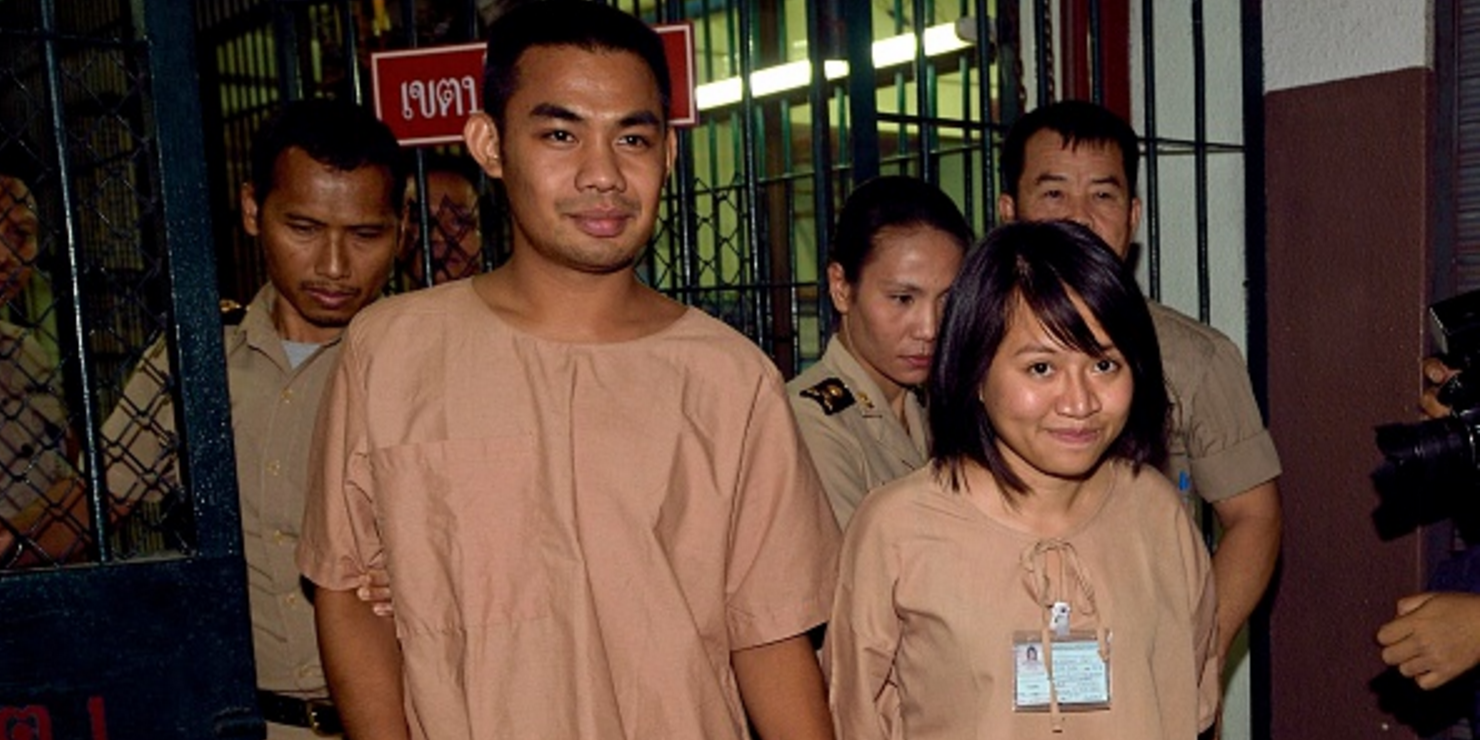 PEN International welcomes the early release of student activists Patiwat Saraiyaem, 26 and Pornthip Munkong, 29, following a royal pardon.  Saraiyaem was released on August 12, 2016, 55 days early, alongside 235 other prisoners in a royal pardon to mark the Queen’s 84th Birthday. Munkong was released two weeks later on 27 August 2016 with over 100 other female inmates, including two others convicted of “lèse majesté”. Patiwat Saraiyaem and Pornthip Munkong have been in detention since their arrest in mid-August 2014, for lèse majesté which criminalises insult to the monarchy under Article 112 of the Criminal Code. They were sentenced to two-and-a-half years in prison on February 23, 2015. The charge of lèse majesté relates to a performance of The Wolf’s Bride (“Jao Sao Ma Pa”), at Thammasat University in October 2013, a play which depicts a fictional monarch.

Writers, academics and activists in Thailand are at risk of attack and imprisonment solely for the peaceful expression of their opinions. PEN International continues to urge the authorities to amend the Criminal Code, in particular the lèse-majesté law, to ensure that it meets Thailand’s international obligations to protect freedom of expression.

No further action needed at this time. Thank you to all who participated in the original action.

Patiwat Saraiyaem is a 26-year-old activist who was in his fifth year at the Faculty of Fine and Applied Arts at Khon Kaen University when he was arrested, and also the Secretary General of the Student Federation of the North East. Pornthip Munkong is a 29-year-old graduate of the Faculty of Political Science at Ramkhamhaeng University, as well as a political activist. Both acted as major characters in a performance of a play titled The Wolf’s Bride, which took place on  October 13, 2013 in Thammasat University to commemorate the 40th anniversary of the October 14 Popular Uprising. The play, which was organised by former members of the now-defunct Prakai Fai Karn Lakorn, part of the left-leaning Prakai Fai (‘Sparking Fire’) theatre group, dramatised the story of a fictional king and his advisor in a fantasy kingdom. While the show was performed only once at the school, it was recorded and shared on social media.

Saraiyaem was arrested on August 14, 2014 and Munkong was arrested the following day. Both were charged with lèse majesté under Article 112 of the criminal code, which states that anyone who “defames, insults or threatens the king, the queen, the heir-apparent or the regent” will be punished with up to 15 years in prison.  During their detention, they were denied bail several times and on 29 December 2014 both pleaded guilty in order to reduce their sentences. Bangkok’s Criminal Court sentenced them to five years in prison, reduced to two-and-a-half years on February 23, 2015. The judges stated that: “performing the play … was an act of defamation and insult in front of numerous people…. Moreover, it was disseminated on many websites, causing damage to the monarchy, which is revered by all Thais [sic.]. Such action is a grave crime that warrants no suspension of the punishment.” Munkong was held in the Central Women’s Prison in Bangkok, while Saraiyaem was detained in Bangkok Remand Prison.

The Thai monarch, King Bhumibol Adulyadej, has been on the throne for six decades and is given an almost god-like status by many Thais. Since the introduction of a constitutional monarchy in 1932, Thailand has been a hotbed of political instability, experiencing alternating periods of democracy and military rule. Popularly known as the ‘14 October Event’, the October 14, 1973 uprising was led by student activists. While it was initially crushed by the army, it ultimately resulted in the end of 26-year military dictatorship. In May 2014, Thailand underwent its 12th successful military coup d’état following almost seven months of escalating political violence. The coup imposed martial law and a curfew, dissolved the Senate – the only remaining national government body with elected members – and granted wide-ranging executive and legislative powers to its military leaders. In the wake of the coup, tight control of the media was imposed; many television and radio stations were shut down and journalists and academics arrested. The number of trials and detentions related to lèse majesté offences also significantly increased after the Coup, in order to silence dissent.  Martial law was finally revoked in March 2015.

PEN International continues to oppose Thailand’s lèse majesté laws which are among the strictest insult laws in the world. PEN reiterates its serious concern for the safety of writers, academics and activists in Thailand, who are at risk of attack and imprisonment solely for the peaceful expression of their opinions.

PEN International urges the authorities to amend the Criminal Code, in particular the lèse-majesté law, to ensure that it meets Thailand’s international obligations to protect freedom of expression. UN human rights mechanisms have repeatedly clarified that criminal defamation and insult laws, including lèse-majesté laws, are incompatible with international standards on free expression.  In 2011, the then UN Special Rapporteur on the promotion and protection of the right to freedom of opinion and expression Frank La Rue called on Thailand to reform its lèse-majesté laws. He said, “The threat of a long prison sentence and vagueness of what kinds of expression constitute defamation, insult, or threat to the monarchy, encourage self-censorship and stifle important debates on matters of public interest, thus putting in jeopardy the right to freedom of opinion and expression.”  They are also not in line with Articles 9 and 19 of the International Covenant on Civil and Political Rights (ICCPR), to which Thailand is a state party.