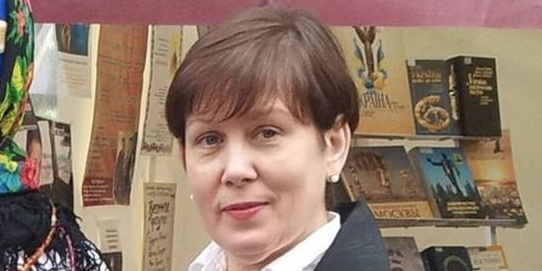 Russia: Conviction of librarian must be quashed

On 5 June 2017, Natalia Sharina, former Director of the state-run Library of Ukrainian Literature in Moscow, was found guilty of “incitement of hatred” towards Russian people and “embezzlement” and handed-down a four-year suspended sentence for holding “extremist literature”. She was arrested in October 2015 after investigators found banned works by Ukrainian nationalist Dmitry Korchinsky in the library she headed. She denied these belonged to the collection and claimed they had been planted. She spent 19 months under house arrest, throughout the investigation and trial, during which time her health seriously deteriorated. She has appealed her conviction and her next trial hearing is expected to take place in the autumn. PEN International believes that the case against Natalia Sharina is politically motivated and calls for her sentence and conviction to be quashed.

Prosecutor General of the Russian Federation

Send copies to the Embassy of Russia in your own country. Embassy addresses may be found here: https://embassy.goabroad.com/embassies-of/russia

Please reach out to your Ministry of Foreign Affairs and diplomatic representatives in Russia, calling on them to raise Natalia Sharina’s case in bilateral fora.

Please inform PEN of any action you take and of any responses you receive.

Please let us know about your activities and send us reports so that we can share them with other centres.

Natalia Sharina, 59, was detained on October 28, 2015 after a former employee of the Library of Ukrainian Literature in Moscow, who was dismissed in 2010, lodged a complaint against her. Investigators searched Sharina’s house and took her to the library where, after several hours of extensive search, they found banned works by Ukrainian nationalist Dmitry Korchinsky. Natalia Sharina denied that these belonged to the library and claimed they had been planted. She was held in police custody for two days, during which time she was denied access to emergency medical care. She was charged under Article 282 of the Russian Criminal Code (“Incitement of Hatred or Enmity”, which carries up to five years in prison) and placed under house arrest on October 30, 2015.

On April 5, 2016 Natalia Sharina was charged with “embezzlement on a large scale” under Article 160 of the Russian Criminal Code, which carries up to 10 years in prison, after being accused of misappropriating library funds to pay for her legal defence in a previous attempt to prosecute her. She denied the accusation, stating that she had used her own money to pay for her lawyer. Natalia Sharina had been charged with distributing extremist literature in 2010 but the case against her was eventually dropped as the books were only declared extremist in 2013.

Natalia Sharina spent 19 months under house arrest, throughout the investigation and trial, which had a serious impact on her health. She was denied access to the telephone and the internet, could only communicate with her lawyer and close relatives and was not allowed to take walks outside for an entire year.

Natalia Sharina’s trial opened on November 2, 2016. On June 5, 2017, the Moscow Meschanskiy District Court found her guilty of “incitement of hatred” and “embezzlement” and handed her a four-year suspended sentence. The time she spent under house arrest will be counted as part of her sentence.

The case against Natalia Sharina took place amidst growing tensions between Russia and Ukraine following the Russian occupation and annexation of Crimea in February-March 2014.  The Russian authorities have also introduced Article 280.1 to the Russian Penal Code, which penalises anyone making public calls that “harm the territorial integrity of Russia” with up to five years in prison. Several people have been sentenced in Russia in relation to material posted online. Most charges pertained to remarks about Crimea being part of Ukraine.

In April 2015, the United Nations Human Rights Committee expressed concerns over “the vague and open-ended definition of extremist activity” in Russia’s anti-extremism legislation and “numerous reports indicating that the law is increasingly used to curtail freedom of expression”. It called on the Russian authorities to revise the law “with a view to clarifying the vague and open-ended definition of ‘extremist activity’, ensuring that the definition requires an element of violence or hatred and establishing clear and precise criteria on how materials may be classified as extremist”. It further called on the authorities to ‘take all measures necessary to prevent the arbitrary use of the law and revise the Federal List of Extremist Materials’ and to ensure that Article 280.1 of the Criminal Code is “not used to silence individuals critical of the State party’s foreign policy, including with regard to Crimea”.