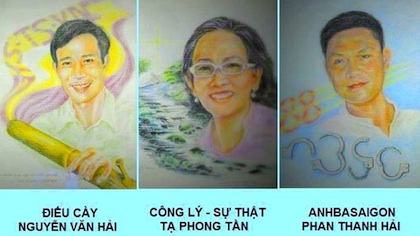 PEN Canada’s Writers in Prison Committee  is shocked at the sentences handed down to bloggers Nguyen Van Hai (aka Dieu Cay), Ta Phong Tan and Phan Thanh Hai on September 24, 2012. The bloggers were sentenced to 12, 10 and four years in prison respectively for  ‘anti-state propaganda’ in critical articles and blogs.  PEN protests their detention in the strongest possible terms, and calls for their immediate and unconditional release, in accordance with the International Covenant on Civil and Political Rights (ICCPR) to which Vietnam is a signatory.

According to PEN’s information, bloggers Nguyen Van Hai (aka Dieu Cay), Ta Phong Tan and Phan Thanh Hai were charged in early April 2012 with ‘conducting propaganda against the Socialist Republic of Viet Nam’ under Article 88 of the Criminal code, for posting articles on the banned website Free Journalists’ Club (Cau Lac Bo Nha Bao Tu Do), which they co-founded, and on their own blogs. Their trial has been repeatedly postponed, and did not comply with international standards of fairness. All three have been held in pre-trial detention for at least a year, in harsh conditions.

Nguyen Van Hai (aka Nguyen Hoang Hai/Dieu Cay), independent journalist and blogger and PEN Canada Honorary Member, has been continuously detained since April 19, 2008, after being charged with alleged tax fraud and sentenced on 10 September 2008 to two and a half years-imprisonment. He is widely believed to be targeted for his criticism of Vietnamese government policy. He should have been released on  October 20, 2010 on completion of this sentence; however, on  October 18,  2010 he was transferred to a Public Security detention camp in Ho Chi Minh city, on new charges based on his online writings for the Free Journalist Network in Viet Nam, published prior to his arrest in 2008. He has been held incommunicado, without access to family visits, letters or medical and food supplies since 18 October 2010. Concerns for his welfare are acute. Nguyen Van Hai is known for his critical internet postings calling for greater democracy and human rights in Vietnam and his participation in protests against Chinese foreign policy.

Lawyer, independent journalist and blogger Phan Thanh Hai (aka Anh Ba Sai Gon), aged 43, was arrested on October 18 2010 for posting ‘false information’ on his blog. His blog is known for its social and news reports about Vietnam, including Vietnam’s territorial disputes with China and the controversial issue of bauxite mining. Prior to his arrest, Phan was frequently subject to harassment and interrogation, and his blog was repeatedly hacked. Despite being a qualified lawyer, he has been denied permission to practice by the Ho Chi Minh Bar Association because of his blogging and activism.

Ta Phong Tan (aka Cong Ly Va Tu Su), is a blogger for Conglysuthat (Justice & Truth), and former police officer. She was arrested on September 5 2011. Ta is a popular blogger among dissidents in Vietnam; she has written articles about corruption, abuse of power, and confiscation of land, among other issues. Her articles have been published in many mainstream media outlets in Vietnam, including Tuoi Tre (Youth), Nguoi Lao Dong (Laborer), Vietnam Net, and the Vietnamese Service of the BBC. On  July 30, 2012 her mother died after self-immolating outside government buildings following months of harassment from Public Security officials.

For more on her story and the plight of over twenty writers currently detained in Vietnam, see “Vietnam’s Blog Shame” in  The Guardian by Kamila Shamsie of English PEN.
TAKE ACTION
Please send appeals: