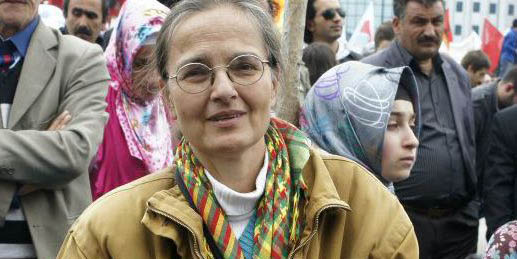 As demonstrations in Istanbul and other cities in Turkey continue, several trials against writers and journalists are still ongoing, some of which opened nearly four years ago. In one of the most recent court hearings, five writers are among 200 defendants in a mass trial of people accused of involvement in the Koma Civakên Kurdistan – Union of Communities in Kurdistan (KCK). PEN Canada is deeply disappointed that only one writer has been freed, and that the trial against all five continues. Two of the writers will remain in prison for at least three more months.  The latest hearing opened on May  27, 2013 and closed two weeks later, on June 7. The next is set to open on September 7.

PEN firmly believes that the charges against Ayşe Berktay, Deniz Zarakolu, Ragip Zarakolu,  Mulazim Ozcan, and Büşra Ersanlı are a violation of their right to freedom of expression, as set out in the International Covenant on Civil and Political Rights (ICCPR), which Turkey has ratified.

Thousands of people are believed to be on trial in Turkey as part of the ongoing KCK investigation. The KCK is an alleged umbrella organisation for groups with links to the banned Kurdistan Workers’ Party (PKK). The crackdown, which has been underway since 2009, has included pro-Kurdish politicians, lawyers, journalists and intellectuals.

The current trial, of around 200 people including the five writers whose details are given below, is being held at a mass hearing in Silivri Court, 50 km from Istanbul. All are charged under Turkey’s Anti Terror Law, yet it is clear that many  defendants have been accused only for their engagement in debates on Kurdish issues, taking part in meetings and other activities that in no way promote violence. These include the PEN Honorary Members, all of whom are affiliated to, or have taken part in events organised by, the pro-Kurdish Party for Peace and Democracy (BDP), a legal party with 29 parliamentary representatives.

It is thought that BDP supporters have been brought under the KCK investigation as a means of undermining the party. PEN International considers the cases against Ayşe Berktay, Deniz Zarakolu, Mulazim Ozcan, Ragip Zarakolu and Büşra Ersanlıto be seriously flawed. It believes the charges against them to be a direct violation of their rights to freedom of expression and association and calls for their dismissal. It is particularly concerned that two of the five remain in prison, and urges that they be released. The five PEN Honorary Members are:

In November 2012, a PEN International delegation to Turkey  met with President Abdullah Gül, Minister for European Union Affairs, Egemen Bağis, and others to raise PEN’s concerns about the large numbers of writers who are detained and on trial. PEN International welcomed the dialogue on the state of free expression in Turkey, and the assurances that measures were being taken to improve the situation. The continuance of these trials is therefore of particular disappointment.  LINKS