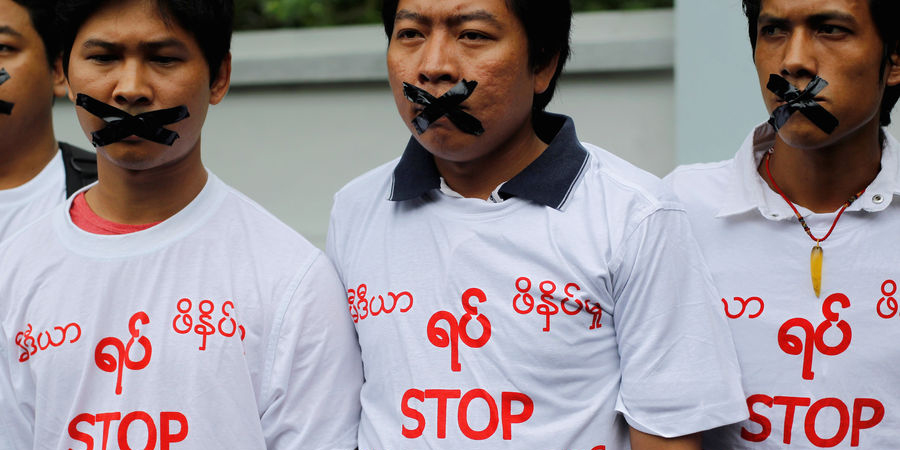 Five journalists with the Unity weekly journal, arrested in January and February 2014, were each sentenced to 10 years in prison with hard labour on July 10, 2014 over a report about an alleged secret chemical weapons factory carried by the publication in January. Fifty other journalists who staged a peaceful protest against the sentences on July 12 now face charges. PEN calls for the five to be released immediately and unconditionally and for any charges against the others related to the peaceful protest to be dropped.

On July 10, 2014 a court in Pakkoku, Magway Region, sentenced U Tin San, the chief executive officer of the weekly Unity journal, and his editorial staff: U Ya Zar Oo, U Paing Thet Kyaw, U Sithu Soe and U Lu Maw Naing to 10 years in jail with hard labour. They had been arrested on Jan. 13 and Feb. 1, 2014 after Unity published an article on Jan. 25 about an alleged secret chemical weapons factory in Pauk Township, Pakokku District known as Defence Product Factory No. 24. According to state media, the five were charged with “disclosing State secrets, trespassing on the restricted area of the factory, taking photographs and the act of abetting” under Article 3(1) A/9 of Myanmar’s Official Secrets Act. Their trial began on Feb. 12, 2014, and they were convicted on June 30, 2014 for breaching the 1923 Official Secrets Act, trespassing in a restricted area and taking photos of a Defence Ministry facility without permission. On June 26, 2014 the publication suspended operations due to financial problems. All five are reportedly planning to lodge an appeal against their conviction and sentence.

On July 12, 2014, 50 reporters, some with tape over their mouths, held a sit-down protest outside the Myanmar Peace Center in Yangon while President U Thein Sein was inside attending a cultural event. Police have opened cases against those involved in the sit-down protest under Section 18 of the Peaceful Assembly and Procession Act. Convictions under Section 18 carry a maximum penalty of one year’s imprisonment and a fine of K30,000 (CAD $33).

The five are currently detained at the Pakokku prison, however there are concerns they may be transferred to remote prisons, far away from their family members. The transfer of prisoners of conscience to remote prisons was a hallmark of the previous military government. Conditions of detention in Myanmar are poor, and all are at risk of torture or other ill-treatment and a lack of access to adequate medical treatment.

PEN’s campaigning for freedom of expression in Myanmar

Myanmar has a been a key country for PEN International’s free expression campaigning for over 20 years, when many of the leading figures and founding members of PEN Myanmar such as such as Zarganar, Ma Thida, and Nay Phone Latt were first imprisoned. In July 2013, a PEN International Publishers Circle delegation went to Myanmar, and met with 20 writers who became the founding members of the PEN Centre. In September 2013, at the 79th International Congress in Reykjavik, Iceland, PEN Myanmar was formally launched, after a half century of repressive military rule in the country. PEN Myanmar has openly dedicated itself to strengthening freedom of expression and legal mechanisms in Myanmar, in addition to working on the pragmatic problems of publication and support of emerging writers.