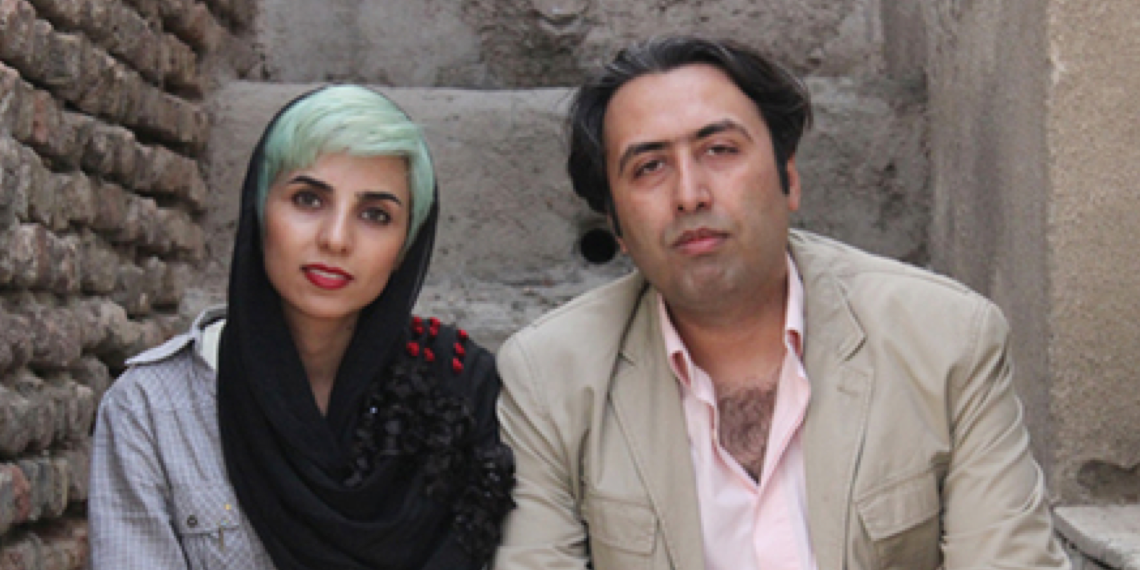 PEN International has learned that the appeal of poets and lyricists Fatemeh Ekhtesari and Mehdi Moosavi will be heard on 23 December 2015. Ekhtesari and Moosavi were sentenced to 11.5 and nine years in prison, respectively, on 12 October 2015 for crimes including ‘insulting the holy sanctities.’ They were also sentenced to 99 lashes each for “illicit relations.” PEN International calls on the Iranian authorities to accept their appeal and drop all charges

Please copy appeals to the diplomatic representative for Iran in your country if possible. Addresses can be found here

According to PEN’s information, on 6 December 2013, poets and activists Fatemeh Ekhtesari and Mehdi Moosavi were due to travel to Turkey for a literary workshop. At the airport they were both informed that they had been placed under travel bans and were summoned for interrogation. They chose not to appear at the interrogation. Later that day Mehdi Moosavi wrote in his Facebook page:

“I and Fatemeh Ekthesari were prevented from leaving the country this morning and our passports were confiscated. We do not know the reason… Why have I been facing problems for years to hold a literary workshop and even classes to teach rhyme and meter? Why are our books banned despite taking care to select the poems and passing the censorship of the poet, editor and publisher? Why should the oppositionist swear at me for writing war poetry and the pro-regime activist swear at me for have read a rumour about me?… I have been often in the same conditions as the artist who killed themselves after years of failing to obtain permission. Do you know how many times I have thought about death? What is the body of an artist worth when their soul is tortured and killed?…”

Within a few hours they had disappeared. There was no further news of them until 24 December 2013, when it was confirmed that they were being held in Section 2A of Evin prison, which is under the administration of the Intelligence Division of the Islamic Revolution Guards Corps and where torture and other ill-treatment of detainees is common. Some reports suggested that they were being held because of their lyrics, which have been performed by the Iranian singer in exile, Shahin Najafi. The two had previously made statements critical of the government and in support of pro-democracy movements, and had both been under escalating pressure in Iran.

On 14 January 2014, Ekhtesari and Moosavi were released on bail. They had been held in Evin Prison since their detention. According to an interview with their lawyer with Radio Farda, both Ekhtesari and Moosavi were convicted of ‘insulting the holy sanctities’, for which they received seven and six year-prison terms respectively. Moosavi was also sentenced to three years in prison for ‘storing tear gas’ and Ekhtesari was sentenced to 18 months for ‘spreading propaganda against the system’, and to three years for allegedly publishing indecent images on the internet. Both were sentenced to 99 lashes for ‘illicit relations’. They are currently free pending their appeal on 23 December 2015.

Mehdi Moosavi, born in 1976, is a prolific poet, and has written five collections of poetry, including The Angels Have Committed Suicide (2002), I Only Publish These for You (2005), and The Little Bird Was Neither a Bird nor Little (2010). Two collections of poems entitled Suddenly and Beeping for the Sheep were deemed unpublishable by the authorities. Many more of his poems were published online. Mehdi Moosavi is known as the leading figure of the ‘Postmodern Ghazal’, the most radical poetic movement in contemporary Iran, known for its rejection of conformist religious and ideological dogma. Most of the works by this movement faced severe censorship by the Iranian officials, and almost all of these works were banned in Iran and have been distributed underground. For some samples of his poetry click here

Fatemeh Ekhtesari is a poet and student of Mehdi Moosavi. She edited the post-modern magazine, Hamin farad bud (It was the very tomorrow). Her most recent poetry collection Feminist discussions before cooking potatoes was withdrawn from bookshops and the Tehran Book Fair. The following information is provided from a Facebook page set up by Swedish poets who have worked with Fatemeh Ekhtesari:

During 2013, Fatemeh Ekhtesari, born 1986, has been part of the literary exchange, Resistance At My Writing Desk, through which six poets from Iran and six poets from Sweden together translated the Persian poets’ work to Swedish. The collaboration culminated in a special issue of the journal Kritiker devoted to contemporary Persian poetry, as well as appearances by the Persian poets at the poetry festivals in Stockholm and Göteborg this past September. Upon returning to Iran, Fatemeh was arrested and interrogated for hours. Her Facebook account was hacked and her blog was shut down.