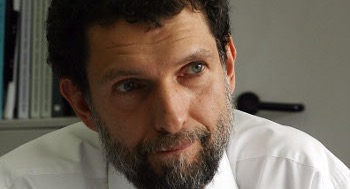 Osman Kavala is a publisher, civil and cultural rights activist and philanthropist working toward peace, human rights, and democracy in Turkey. First detained on October 18, 2017, Kavala has been held ever since at Silivri Prison on the outskirts of Istanbul. He was first charged for being responsible for crimes allegedly committed by protestors across Turkey during the 2013 Gezi Park protests. Then, on 18 February 2020, he was acquitted of those charges only to be told hours later that a new investigation had been opened against him and he was returned to prison. On October 8, 2020, it was announced that he would face a new trial on charges of threats to ‘constitutional order’ that carries a life sentence, with an additional 20-year sentence for ‘espionage’. He remains in pre-trial detention. PEN considers the charges against Kavala to be a direct violation of his right to freedom of expression, motivated by his promotion of civil and political rights. It calls that the charges against him be dropped and that he be immediately released.

The following letter was written by the Ukrainian novelist Andrey Kurkov

You know that this summer 1000 pebbles were laid out on Parliament Hill, overlooking London. This was done to mark 1000 days that you spent in Silivri prison, having been arrested on the 1st of November 2017. You were acquitted by local court and the European Court of Human Rights ruled that your detention was unlawful. Then new accusations were brought against you, accusations which reminded me of Stalin’s terror of 1930s – you were accused of espionage, a charge that indicates that the authorities want to keep you locked up for life! I cannot explain myself why the Turkish Authorities are so afraid of you? Is being an active member of civil society a crime? Is it a crime to be a co-founder of publishing house that gave Turkish readers access to books by many world class writers, such as Nabokov, Joyce, Faulkner? In fact, my first and only book in Turkish was also published by Iletisim Publishers.

And now you are still in Silivri Hight Security prison – definitely the most modern and the biggest prison in Turkey and probably in Europe too. I have read that this prison is a marvel of the Turkish penitentiary system, it can house 11 000 inmates and in fact, officially, it is called a prison campus which might make one think of academia and higher learning. Apparently, you are 5 km away from the sea, from the beach and you have a freedom to lock your cell from inside! And also, apparently, you have in your cell a button to press if you want to call for help! Or have I misunderstood the purpose of this button? According to feedback on Google Maps the prison guards that might appear if you press this button are quite impatient and impolite.

Your entire situation seems to me so surreal that, if I did not know that it was your reality, I would assume it was a story by George Orwell. Maybe with the help of Franz Kafka.

I feel very bitter about it. I know many people are thinking of you and wishing you freedom. The world of human humans is on your side and will be standing by you until the decision of the European Court of Human Rights is fulfilled and you are acquitted for good from all the false accusations.

I love your country and its history and that makes me feel even more bitter. Many years ago, I invited the most known Turkish writer Orhan Pamuk to visit Ukraine and as a result we have now many of his novels translated into Ukrainian. He is also one of the authors published by Iletisim Publishers. He is one of writers who brought Turkey to the world. I would be happy to welcome you in Ukraine once you are free. I would be very happy for you to return to civil society activities and cultural projects. I believe this time will come very soon.

See you in Kiev or in Istanbul

Send an appeal to the Turkish authorities

Ask the authorities to:

Explain that you are:

Minister of Justice of the Republic of Turkey

Send copies to the Embassy of Turkey in your country: http://www.mfa.gov.tr/turkish-representations.en.mfa

Tell others: share Osman Kavala’s case and his work