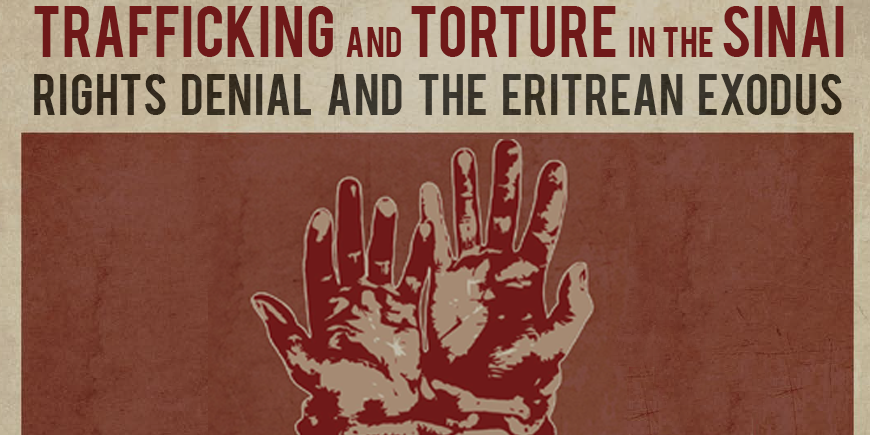 A Q&A  with Dan Connell

On Thursday, September 19, 2013 Dan Connell will address Ryerson University’s International Issues Discussion (IID) series on the connections between Eritrea’s political and human rights. Torture and Trafficking in the Sinai: Rights Denial and the Eritrean Exodus will discuss how a broad political crackdown in 2001, and the silencing of the country’s independent media,  set the stage for many of the human rights violations that followed. Dan Connell is a senior lecturer in journalism and African studies at Simmons College, Boston. His reports on the Horn of Africa have been carried by the BBC, Reuters, the Financial Times, and numerous other international media. He is the author of ten books and is currently researching the plight of Eritrean refugees.

PC: What do you see as the link between the disappearance of the free press in Eritrea and the political crises that followed?

There are signs today that the dictatorship is starting to unravel, in part because a diaspora-based alternative media has kept political debate going

DC: The suppression of the independent press in Eritrea in September 2001 was part of a broad crackdown on dissent during which high level critics of the regime and the editors and reporters who had carried their views were “disappeared” much as political activists in South America were disappeared in the 1970s and ‘80s. The Isaias Afwerki regime had been thoroughly unsettled by the vigorous debate over its conduct of a costly border war with Ethiopia and with the slow pace of democratization; rather than engaging its critics, it tried to silence them. But there are signs today that the dictatorship is starting to unravel, in part because a diaspora-based alternative media has arisen to keep this debate going.

PC: Given the urgency of other international concerns—particularly the widening conflict in Syria and the political uncertainty in Egypt—why should the international community pay attention to Eritrea?

DC: Newly independent Eritrea was attractive to the international community because it offered a model of a dynamic, multiethnic society—half Christian, half Muslim—relying on the energy, enthusiasm and creativity of its population rather than foreign aid for its development. Though war and repression derailed that process, it’s not dead—just in dire need of resuscitation. But I’m confident the Eritreans can recapture that vision and make it work if they can get out from under this regime. And we very much need such an example against the backdrop of ethnic and religious extremism erupting across the region.

If Eritrea cannot manage a stable transition and get back on the road to some form of democratic, inclusive development, it too is liable to descend into anarchy or war-lordism, which could open a side door to destabilizing forces across the Horn of Africa and beyond. It sits at a strategic crossroads along the Red Sea between Africa and the Middle East, which is why it’s been a target of external interest for centuries, going back as far as the Byzantine Empire. Meanwhile, the current regime has itself acted as a destabilizing force, helping rebels and extremists from Sudan to Ethiopia to Somalia in an effort to wield influence beyond its small size. We ignore it at our peril.

The current regime has acted as a destabilizing force in the region, helping rebels and extremists from Sudan to Ethiopia to Somalia in an effort to wield influence beyond its small size; we ignore it at our peril

PC: Who is most likely to influence the Eritrean government’s response to criticism of its grim record on freedom of expression and human rights?

DC: Isaias doesn’t appear to listen to anyone when it comes to human rights or civil liberties, but those around him do, and efforts to reverse the direction of the country on these issues ought to be aimed at them. A European or Canadian envoy is unlikely to get far and an American on such a mission would probably not get a visa. The UN’s special rapporteur on human rights was rebuffed when she sought to visit the country earlier this year. An African or Middle Eastern envoy would have more influence. The countries with the most leverage today are probably South Africa, Egypt and Qatar, but the latter two are hardly strong advocates of human rights. In the end, the pressure to open up the society will have to come from its citizens, at home and abroad. However, the regime’s Achilles heel is Eritrea’s stagnant economy, which relies now on a mix of diaspora remittances and taxes and the hope of substantial future revenue from mining.

PC: Do you see foreign investment in Eritrea from the EU and North America as increasing the possibility of commercial interests overtaking humanitarian ones?

DC: The Eritrean government has been very cagey in opening the country to international mining companies, spreading the concessions among many to minimize the leverage of any one of them, but the flip side to this is that no country has such an outsized investment there that it cannot risk it by holding the regime to account for its abysmal human rights and humanitarian record—even Canada, whose Nevsun Resources, based in Vancouver, was the first such company to turn a profit from its gold mining operations there and whose payouts to the regime are a key prop in sustaining it.

Isaias doesn’t appear to listen to anyone when it comes to human rights or civil liberties, but those around him do, and efforts to reverse the direction of the country on these issues ought to be aimed at them

PC: You suggest reaching out to the new generation in order to overcome the culture of silence and the lack of internal debate. Given recent Eritrean history do you see this as a genuine possibility?

DC: I do. Much of the older generation remains stuck in personal rivalries and ideological nitpicking that have changed little since the 1960s, both within the regime and in the external opposition. Younger Eritreans have lost patience with this. Their disenchantment can be seen in the huge numbers of those who have fled Eritrea in recent years, often at great personal risk. Many have become disillusioned and disengaged altogether, but a growing number of those outside are exchanging ideas, organizing themselves into loose social movements rather than the highly centralized parties of their forbears, and initiating all sorts of creative, nonviolent protest through counterparts within the country. This is a generation that connects through social media like Facebook and convenes political discussions on internet chat sites involving thousands at a time. In my view, this confirms—and not for the first time—that locking up writers and editors and shutting down newspapers cannot kill the ideas they fought to express.