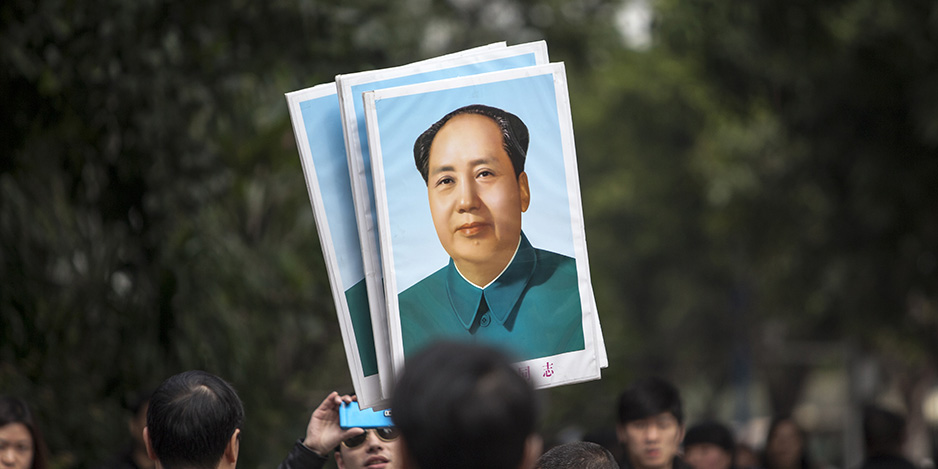 Speaking to OpenCanada.org ahead of the Chinese Communist Party’s (CCP) Eighteenth National Congress in November 2012, PEN Canada Honorary Member Jiang Weiping foresaw a tussle between the “new-versus-old dichotomy” in China. Yet despite the election of the relatively progressive Xi Jinping as CCP General Secretary, Chinese politics remains deeply polarized. Jeremy Paltiel considers how the diverging stories of two preeminent writers, Mo Yan and Liu Xiaobo, articulate these tensions, especially as they relate to free expression in the People’s Republic.

Mo self-consciously roots himself in the mud of his ancestral village; Liu is an outspoken advocate of Westernization and cosmopolitan liberalism

China stands at a crossroads of reform. In November, the fifth generation of leaders since the People’s Republic was founded was installed at the Eighteenth National Congress of the Chinese Communist Party. When I visited Beijing this past December, I kept hearing that Xi Jinping was like a breath of fresh air, and that the previous decade under Hu Jintao had been wasted through timidity and observance of old conventions. People looked expectantly for leaders to strike out in new directions. Xi declared his intention of realizing the ‘dream of a beautiful China’, and he wrapped himself in the mantle of Deng Xiaoping, retracing the ‘southern tour’ of 1991-92 – when Deng prodded the Party towards market economics and foreign investment as the answer to the collapse of the Soviet Union. Xi also decreed that henceforth leaders would dispense with ceremony and do away with sealed-off roads, red carpets and welcome banquets whenever they ventured out from the capital.

As Xi stirred up these hopes for change, Mo Yan was being inducted as the 2012 laureate of the Nobel Prize for literature. Mo was criticized for not speaking out more forcefully in favor of freedom of expression, specifically against the imprisonment of Liu Xiaobo, the 2010 recipient of the Peace Prize.

Mo tells us in coded language that he speaks for freedom of expression in his own way, by telling stories, and not to score political points

Mo and Liu, both born in 1955, are a study in contrasts. Mo is the peasant son of an illiterate mother; Liu, the child of persecuted intellectuals ‘re-educated’ in the countryside as a punishment during the Cultural Revolution. Mo self-consciously roots himself in the mud of his ancestral village; Liu is an outspoken advocate of Westernization and cosmopolitan liberalism who languishes in jail for authoring a draft constitution in Charter 08. Liu was President of the Independent Chinese PEN Center (2003 – 2007), Mo is the lifetime Honorary Chair of the (official) Chinese Writers Association.  Liu was a prominent professor at Mo Yan’s own Alma Mater, Beijing Normal University, at the time he was arrested and imprisoned in the wake of the Tiananmen repression of 1989. In fact, Liu was in prison while Mo was studying for his Masters degree in creative writing alongside other well-known writers like Yu Hua.  Soon after the Nobel was awarded, Mo mentioned in passing that he hoped for Liu’s release, but declined to repeat his comments more boldly in Stockholm, provoking scorn from Salman Rushdie among others. Liu was not allowed to attend the 2010 Awards ceremony in Oslo, and the Chinese government pressured ambassadors from many countries to boycott the event.

Mo Yan attended his investiture in Stockholm with the government’s blessings.  In a press conference before the ceremony, he likened censorship to airport security checks, designed to keep the passengers safe. Nevertheless, Mo’s acceptance speech is as interesting for what it does say as for what it omits. He tells us at the start that he was left to starve during Mao’s Great Leap Forward – though he conspicuously leaves out Mao’s name and the political circumstances that led to the famine. He identifies himself as a traditional storyteller, but also acknowledges the influence of William Faulkner and Gabriel Garcia Marquez in a nod to cosmopolitanism. Mo ends his speech with two stories, one of which involves his lasting regret for denouncing a classmate who failed to shed obligatory crocodile tears during a staged event of ‘class education’ about the bitter oppression of the old society. “When everyone cries it should be permitted not to cry,” concludes an older and wiser Mo, “and when everyone is laughing it is OK not to join in.” In another story he tells us that as an enlisted man he once prided himself for cockily talking back to a condescending senior officer. Now, however, he says he’s not quite so sure of himself. Mo tells us in coded language that he speaks for freedom of expression in his own way, by telling stories, and not to score political points.

Xi would like to chart a middle course, a conservative backlash could doom his initiatives against the bureaucrats, but permissive liberalization would cost him control of the political agenda

Right after the 18th Party Congress, a number of intellectuals re-engaged with the cause of constitutional governance for which Liu Xiaobo was jailed. The editors of China’s boldest newspaper, Southern Weekend, made this their wish in the a New Year’s editorial before it was pulled from the masthead in favor of a paean in praise of the leadership of the Party, written and rammed through on orders of Tuo Zhen, the head of the Propaganda Department of Guangdong Province.  Journalists and supporters protested outside the newspaper’s offices. In response, a commentary in the Global Times, a sister paper of the People’s Daily (a newspaper directly under Party control), warned editors against thinking they are free to express their own opinions rather than those of the Party-State they serve.

Online petitions sprung up to support Southern Weekly, mostly signed by the usual suspects of liberal reform like the legal scholar at Beijing University, He Weifang. But support in social media also included new faces, even celebrities from the arts world. Despite orders to toe the line scripted in the Global Times, the Beijing News found cryptic ways to support their colleagues at Southern Weekend, praising ‘southern porridge’ nanfang de zhou (a  homonym for Southern Weekend Nanfang Zhou Bao). The standoff was eventually defused through the mediation of the incoming Party Secretary of Guangdong, Hu Chunhua, and Southern Weekend appeared as usual on Thursday January 10.

Like Mo Yan, Xi Jinping wants to choose his direction without being pushed. The New Year began with new regulations on the internet, mandating real names and identities in on-line interventions and holding service providers responsible for content posted online. Xi realizes today’s educated and prosperous population will not tolerate being treated like children. But he has not quite embraced the corollary – that not lording it over the people will require not only patient listening but also responding and engaging on equal terms, not as an all-knowing parent. Yielding to public pressure smacks of defeat, which in some ways it is. Xi and his colleagues recognize that education, wealth, and the new social media have equipped the people to answer back. Their problem is in how to keep political initiative in their own hands and maintain the Party’s “leading role.”

Xi must  cultivate the thick skin and scuffed knees he developed when he was ‘sent down’ to the countryside as a teenager.

Hu Jintao, who advocated a ‘harmonious society’ and ‘scientific development’, was defeated by the (new) media.  Bo Xilai, who built up a modern personality cult by cutting a populist image in the southwest, was not challenged by Hu, but was undone by transmitted cellphone images of his police-chief henchman seeking asylum in the US Consulate in neighbouring Chengdu. Hu was irrevocably weakened by the failed cover-up of a fatal crash of a Ferrari.  The dead driver was the son of Hu’s chief of staff, and lurid details of the two naked women who died alongside him could not be suppressed.  Xi Jinping has the right touch and good instincts about engaging directly with an informed and mature public, but he is the head of an apparatus with a fundamental interest in telling the public what, when and how to act in their own ‘best interest.’ Under his leadership, an irresistible force of free expression threatens to overwhelm an immovable object.

The Party and its leader are caught between contradictory forces, both on display in the protest at Southern Weekend. The Southern media group represents the forces of openness and change whose energy Xi Jinping requires to enact a new agenda.  In the opposite corner stand the new nationalists, (some of whom held up pictures of Chairman Mao as they denounced the insolence of the journalists at Southern Weekend) who claim that China rises triumphantly over the decadence of the West and must not converge with the so-called universality of Western liberal values. Xi courts the nationalists with his patriotic vision of the ‘Chinese Dream’ but he would like to chart a middle course. A conservative backlash would tie his hands and doom desperately needed initiatives against entrenched bureaucratic interests. Yet permissive liberalization would cost him control of the political agenda and lay him open to ideological criticism.

Having demonstrated that he is willing to engage people directly and without ceremony, Xi must  cultivate the thick skin and scuffed knees he developed when he was ‘sent down’ to the countryside as a teenager.  He needs a whole cohort of thick-skinned officials to rise alongside him, at all levels, prepared for the new reality of an engaged citizenry unafraid to confront its leaders on the issues.

We await the moment when the clever hecklers will be invited to climb onstage into the limelight. The alternative, is a chaotic dénouement of tossed bottles and broken glass.

Mo Yan has a vested interest in expressing himself his own way, using earthy language to tell stories that leave his message for the reader to divine. But the moment Xi Jinping sweeps away the formalism of Party leadership he will inevitably find himself in a face-to-face dialogue that he cannot always dominate.  Right now, we are observing a play on stage with heckling and cat-calls from the audience, complete with outbursts of hysterical laughter when the provocations touch a raw nerve. The cultural gadfly and avant-garde artist Ai Weiwei is among the best known of these troublemakers.  More and more the characters on the stage feel compelled to join in, so as not to lose their hold on the audience. The script has run out. We await the moment when the clever hecklers will be invited to climb onstage into the limelight. The alternative is a chaotic dénouement of tossed bottles and broken glass.

Jeremy Paltiel is Professor of political science at Carleton University in Ottawa and was visiting professor at the department of international relations at Tsinghua University in Beijing in 2009.

View all posts by Jeremy Paltiel →