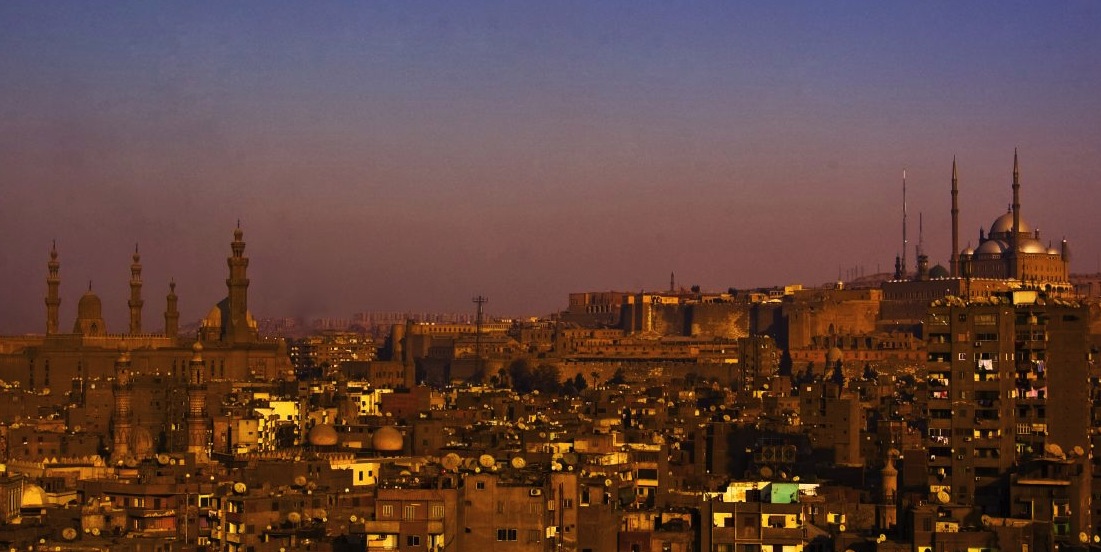 PEN Canada member Kim Echlin reports back from the Cairo Literature Festival, held February 11-16, 2017. This year’s festival welcomed eighteen writers from the Middle East, Europe and North America. The theme was “Women and Literature” with panel discussions ranging widely over questions of liberty and quests for freedom, as well as panels on translation and publishing.

Cairo is home to 20.5 million people, a city of hospitality, warmth and humour, of struggle, political unrest and intense poverty. The Giza Pyramid is in the city, and a short drive away are the pyramids of Saqqara, empty of tourists, haunting, burnished white against ghostly sands and golden sky. The graffiti in Tahrir Square– المجد للمجهولين (“Glory to the unknown”) tis written over darkly painted images of contemporary faces of protest. In this city where millions live without electricity and running water, a half million people have moved into the “City of the Dead,” the el’erafa, an Islamic necropolis below the Mokattam Hills in southeastern Cairo. Here, among the tombs, the people can make gardens.

Visiting writers at this year’s Cairo Literature Festival enjoyed socializing over coffee or tea with mint and perhaps a shisha water pipe in Cairo’s innumerable cafes. When I visited the University of Cairo I was treated by students to the latest culinary food fad of “smoking” liquid nitrogen ice cream after a lunch of Syrian fries. We climbed minarets at noon and listened to men’s voices calling across the city, inviting the people to pray, to put aside for a moment struggles and sorrows, joys and the sociability of their lives in this fabled city. There is much to see and feel for newcomers.

The Cairo Literature Festival venues took us across the crowded metropolis, to a hall in the old market, Khan al-Khalili, down an alley to the funky Rawabat Theatre, up six floors in a charming cage elevator to the Doum Cultural Centre, and through the columned entrance of the gorgeous Grand Library of Cairo in Zamalek in the middle of the Nile.

Readings and panel discussions took place in an amiable mix of Arabic and English and French, supplemented this year by Slovenian, Norwegian, German and Dutch, with occasional professional translation, but more often whispered translations as people slipped in beside each other to help. I was the beneficiary of many of these simultaneous (and spontaneous) translators, a notable one by Ahmed Salah Eldein (Arabic translator of Nobel Prize winner, Svetlana Alexievich) of a poetry reading by Syrian poet, Rasha Omran. It is no small accomplishment to translate poetry on the fly, and I was delighted to not only ‘feel’ the poetry in the poet’s voice but to see her imagery through the murmured words in my ear. Thank you to each of you who gave us access to these Arabic readings.

My Arabic language publisher is Marwan Adwan of Mamdouh Publishing House, originally from Syria. He works with immense resilience in a context of war and exile, and he champions translation and literary work that reaches across culture, religion, and language to deepen our international community of readers and writers. In order to keep publishing, he has had to move countries, adapt. People find ways to continue working and at this festival we heard from a number of Syrian, and other writers in exile.

The vision of the 2017 Cairo Literature Festival was deep and broad and humane. I would like to introduce you to one of the important cultural workers I met at the festival: festival organizer Mohamed El-Baaly.

The inimitable Mohamed El-Baaly is the general manager of Sefsafa Culture and Publishing, which he co-founded in 2009. With 147 titles, his house is one of the most active small publishing houses in Egypt, and he works not only in Arabic but in a number of translations from around the world.

El-Baaly was involved in the Arab Spring and is committed to cultural work in and beyond Cairo. Since 2012, Sefsafa has participated in El Fan Midan (Art at the Square), a monthly festival aimed at promoting culture in the streets of revolutionary Egypt. In 2014, Sefsafa has added the annual “Egypt Comix Week,” to promote and discuss comics and graphic novels. And at the Frankfurt Book Fair that year he participated in a panel discussion called “Democratic Transition in the Muslim World: Indonesia and Egypt.”

El-Baaly has two new initiatives underway. The first is a non-profit audio book project for the visually impaired. The second is the Café Library project, a network of cafes for culture-building in small towns in upper Egypt. This project will make contracts with cafes to sell books and to host readings and cultural events in places without book shops or cultural spaces.

El-Baaly runs the busy annual Cairo Literature Festival with a team of volunteers, many students of literature, and he encourages all of our cultural exchange and discussion. This festival is an astounding accomplishment when we consider the challenges of organizing international travel and funding.

El-Baaly asked one of the best questions of the week when, at the Grand Cairo Library, he queried a panel of poets and writers who have worked largely in exile about how they continue to write through conditions of war and displacement. This question elicited a profound discussion of the nature of truth, our humanity, loss, longing. He himself feels that it is difficult to write about events as they happen because of deep emotion and the need to verify information. The goal of his work through Sefsafa is to encourage new writers, to provide books not from the mainstream and in translation, and to continue to support freedom of expression.

El-Baaly is married to the Egyptian researcher, Hend Magdi, and they have a baby daughter who also came to the festival.

End Note:
The Egyptian government has frozen NGO funding on several cultural and feminist initiatives. Feminist activists Mozn Hassan and Azza Soliman continue to suffer the imposition of travel bans and the freezing of their organizations’ funding from international NGOs.

A special thank you to the Canadian Embassy in Cairo who supported this cultural exchange with the Cairo Literature Festival.

PEN has most recently worked on behalf of Al Jazeera journalist Mohamed Fahmy and Baher Mohamed, and poet Omar Hazek.

Kim Echlin lives in Toronto. She is the author of Elephant Winter, Dagmar’s Daughter, and Inanna: From the Myths of Ancient Sumer. Her third novel, The Disappeared, was nominated for the Scotiabank Giller Prize and won the Barnes & Noble Discover Great New Writers Award for Fiction. The Disappeared and Under the Visible Life are now available in Arabic with Mamdouh Adwan Publishing.