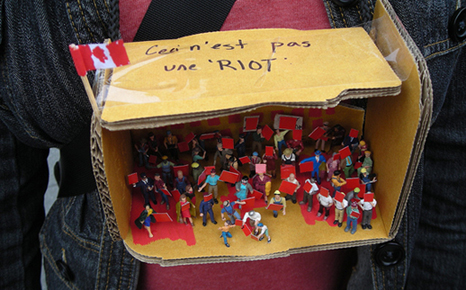 On May 18, 2012 the Quebec National Assembly passed Bill 78 to “enable students to receive instruction from the postsecondary institutions they attend.” Like other freedom of expression organizations, PEN raised concerns that the new law grants unjustifiable powers to local authorities and discourages, or silences, legitimate collective action and civil protest.

We thought there would be no one better to explore the issue than two members of PEN Canada’s National Affairs committee. Grace Westcott is a commercial lawyer specializing in copyright, media and the cultural industries. Bruce Walsh is an anti-censorship activist and publishing-industry veteran who has spent years defending freedom of expression in Canada.

The messy business of democracy

“Out of the bars and into the street!” has been the call to action by queer folk since the beginning of the gay rights movement. When the state attacked our institutions we spontaneously filled the streets with our bodies and our rage.

It was on those streets where we began to organize court cases, fundraisers, and yet more demonstrations to fight those who wanted us to shut up and go away. It was on those streets where we accepted the responsibility of citizenship. Yes, we would agitate for change through grassroots action, but we would also push for change in the voting booth. That’s democracy at work.

We never asked for anyone’s permission to be there; we never got permits to demonstrate.

I have participated in die-ins, sit-ins, and kiss-ins. I have blocked traffic, burned politicians in effigy, and led hundreds of people through the streets in defiance of the law. The risk of arrest was real. That goes with the territory when carrying out acts of civil disobedience.

We achieved real social, political, and legal change. It was worth the risk.

Turns out that was child’s play compared to what the demonstrators in Quebec are confronted with today. Along with the rubber bullets, kettling, and pepper spray, demonstrators now face enormous fines for gathering together and marching without prior approval, thanks to Bill 78.

I may not understand student demands on tuition fees in Quebec, but I definitely disagree with a government that places egregious limitations on civil liberties.

I fear that if we had faced these types of fines during the heyday of gay liberation, we would not be at the point we are today. Fines of $35,000 would have kept people off the street. Fines of $125,000 would have crippled our organizations.

The Quebec government must withdraw Bill 78 and allow the messy business of democracy to occur. It must disavow the tools of repression and listen to what the next generation of citizens has to say.

I’ll say this for Quebec’s Bill 78: it has firmly shifted the spotlight to itself.  It’s now almost irrelevant whether you are in, or out, of sympathy with the tuition demands of the student demonstrators; whatever your view, when legislation weighs in with vague, discretionary and ill-considered restrictions on freedom of peaceful assembly, it demands a response.

Bill 78 is deeply flawed, but it has a legitimate goal.  It comes in response to weeks of disruption that have jeopardized the winter term of thousands of Quebec students. The goal – “to enable students to receive instruction from the post-secondary institutions they attend” – is an important one.  But the means devised in the Bill to meet that goal are seriously off-base.


Bill 78 is deeply flawed, but it has a legitimate goal.

Much of the Bill is remedial, designed to deal with the consequences of the broken academic year. It provides for the suspension of term at those institutions whose classes have been interrupted, and for the eventual resumption of class.  It requires universities to ensure that students whose terms have been cut short are not penalized academically.  It requires all post-secondary institutions to deliver instruction and all employees of such institutions to report for work. This is ‘getting back to business’.

The Bill then prohibits interference with rights of access. Specifically, it prohibits anyone, by any act or omission, from denying students their right to receive instruction from the institution they attend or preventing or impeding such instruction. It prohibits anyone from denying a person access to a place if the person has the right or a duty to be there for university or college purposes.

These provisions are, as a matter of principle, clearly right.  Frankly, existing laws of general application should already prohibit interference with a person’s right lawfully to come and go.

The Bill compounds these issues by making student associations into enforcers.  Each student association must “employ appropriate means to induce the students it represents not to contravene” the prohibitions. A similar obligation is imposed on employee associations in respect of their members. A failure to meet this obligation could result in impressive fines of $25,000 to $125,000 per day, doubling for a second or subsequent offence.


Bill 78 is a ham-fisted, time-limited effort to bulk-up the Quebec government’s power to address the current student unrest.

More trouble is to come.  The Bill requires eight hours prior written notification to the police of any demonstration of 50 or more on any property accessible to the public. The notice must specify the time, duration, venue and route, to allow police to require a change in the planned route or venue where it “poses serious risks for public security…so as to maintain peace, order and public security”.  It is easy to see legitimate reasons for wanting advance notice; it’s harder to justify them.  It would be one thing if prior notice of a planned demonstration was instituted as an informal and voluntary practice – as has been done on at least one campus I am familiar with.   But when imposed by law, subject to police discretion and backed by stiff financial penalties for failure to comply that sweep in not only those directly organizing a demonstration, but any student association taking part, such a requirement goes too far in restricting the right to peaceable assembly.

It is said that hard cases make bad law, and perhaps hard circumstances make bad legislation.  Bill 78 is a ham-fisted, time-limited effort to bulk-up the Quebec government’s power to address the current student unrest. The Bill has raised the stakes considerably by putting student associations and federations at risk of substantial liability for fines, cuts in funding and possible third party claims.  As of the day of writing, students are still demonstrating, but the Quebec government and student representatives are heading into day two of discussions, with early indications there is hope for a settlement.  A repeal of the offending provisions of Bill 78 will likely be part of any settlement. We should expect that; indeed, we should demand repeal, settlement or not.  As for the student tuition demands,  it would be nice if the students were to give some acknowledgement, in these difficult economic times, of all the other socially-worthy, competing interests for limited government funding beyond their own particular concern.  Let’s hope.

Grace Westcott is a commercial lawyer focusing on copyright, media and the cultural industries.

View all posts by Bruce Walsh →