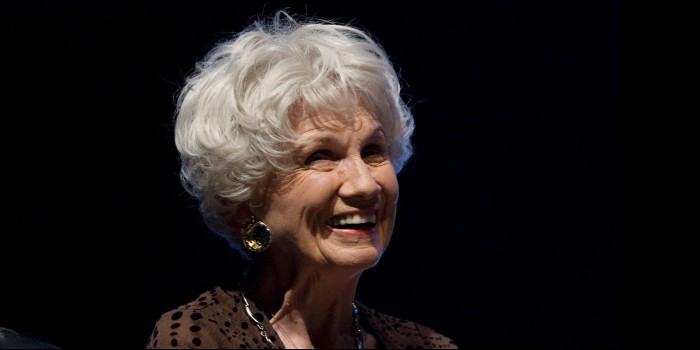 On October 10, 2013, Alice Munro was awarded the 2013 Nobel Prize in Literature for her “mastery of the contemporary short story.” She is the thirteenth woman and only the second Canadian-born writer to receive the award. Munro said she hopes her win fosters further interest in all Canadian writers and the short story form.

In June 2013, PEN Canada put forward Claire Battershill’s short story, “The Collective Name for Ninjas,” for the inaugural  PEN International New Voices Award. She was shortlisted for the prize and read her work at the 79th annual PEN International Congress in Reykjavík. In this blog, Battershill considers the enchantments of the Munro style.

Munro’s stories: the Sublime and the Beautiful

“Chaddeleys and Flemings,” the opening story in The Moons of Jupiter, was the first of Alice Munro’s stories I read. Possibly for that nostalgic reason alone, it’s still my favourite. It introduced me, when I was thirteen, to her Huron County: a world of faraway grown-ups with husbands or ex-husbands, hateful friendships, sullen children, and jobs that suited or didn’t suit them. They ate jellied salads in rural kitchens and argued by a lake I’d never seen. I’m quite sure that at the time I didn’t understand much about the story, or not really, but I remember sensing that something complicated was going on beneath its surface. I have returned to it periodically over the years and each time I read it I’m drawn in again by its formal intricacy and the thin, almost imperceptible line it draws between slap-stick humour and desperate tragedy.

It’s a first-person story in two parts, one for the narrator’s mother’s family and one for her father’s. Like most stories about families and generational inheritance, it’s deeply concerned with time passing: not in a linear, simple way, flowing from one moment to the next, but in bright, expressive bursts punctuated by silences. The whole story oscillates between past and present, jumping forward and back from a “platform of time,” to use Virginia Woolf’s phrase, a fleeting present moment just long enough to for the narrator stand on and speak.

Lingering maximally, expansively, adjectivally on just the right moment is one of Munro’s most powerful techniques, especially when it brushes up against her pared-down dialogue. The short story is not an art of scarcity, but an art of selection, and one that is capacious enough to linger with a small girl in a cold dining room.

The first part of the story, “Connection,” begins with a description of the narrator’s mother’s American cousins, who are visiting the family in Dalgleish, a fictional town in rural Ontario. The boisterous cousins sing “Row, Row, Row your Boat,” in a round, create a family talent contest, and traipse around the village having adventures: “maiden ladies, they were called. Old maids was too thin a term, it would not cover them.” Even that early sentence conveys so much of the story’s tone: the passive voice of “were called” with no mention of who gave the aunts their description; the inadequacy of conventional terminology to describe these women; the joke about their corpulence through the puns on “thin” and “cover;” and the way in which the word “lady” has connotations of lavishness (though not always daintiness) while “maid” suggests austerity (though not always frumpiness). It’s faintly mean, it’s funny, and you can feel in it the careful attention to adult words and phrasing characteristic of an observant child.

The cousins in “Chaddeleys and Flemings” are actually introduced by an adult narrator looking back on her youth from the uneven ground of her marriage, but the feeling of wide-eyed childhood ogling that suffuses the opening section of “Connection” is so vivid that process of growing up feels like it’s happening in the time and at the pace of the story. The irony of the perspective is perhaps most evident in the depiction of eavesdropping on adult conversation:

“What is raped?” said my little sister.

“Oh-oh,” said Iris, “It means you get your pocketbook stolen.”

Pocketbook: an American word. My sister and I didn’t know what that meant either but we were not equal to two questions in a row. I knew that wasn’t what rape meant anyway; it meant something dirty.

“Purse. Purse stolen,” said my mother in a festive but cautioning tone.

The dialogue here, existing on two obviously distinct levels, is restrained in its presentation even as it is bold in its content. Iris doesn’t turn towards the little girls or speak down to them. The “Oh-oh” for the grown-ups is tagged with the same simple “said” of the explanation for the girls. It is implied that the mother’s tone as she clarifies the Americanism is a warning for everyone in the conversation. The emphasis on not-saying, though, contrasts stylistically with Munro’s sensuous description. One of my favourite passages in the story describes a gift the cousins left behind:

Long after the chocolates were eaten, and the cousins had gone, we kept the chocolate-box in the linen-drawer in the dining-room sideboard, waiting for some ceremonial use that never presented itself. It was still full of the empty chocolate cups of dark, fluted paper. In the wintertime I would sometimes go into the cold dining room and sniff at the cups, inhaling their smell of artifice and luxury; I would read again the descriptions on the map provided on the inside of the box-top: hazelnut, creamy nougat, Turkish delight, golden toffee, peppermint cream.

There is a lot of talk about economy as a virtue of the short story, assuming, sensibly, that because a work is 35 pages long its language must, by necessity, be stripped to essentials. Sometimes that’s true, as in the dialogue above which manages to say so much more than the characters actually say out loud, but what’s so delicious about the chocolate box how lavishly it’s described. The types of chocolate are properly named: they’re “creamy” and “golden” even in their absence. The detail of the brown paper cups is so vivid you can almost hear those little empty shells rustling around in the box. Lingering maximally, expansively, adjectivally on just the right moment is one of Munro’s most powerful techniques, especially when it brushes up against her pared-down dialogue. The short story is not an art of scarcity, but an art of selection, and one that is capacious enough to linger with a small girl in a cold dining room. Because of the sensuousness of the passage it’s hard, by the end of the story, not to see the empty chocolate box as a metaphor for the sweet richness that the narrator wants and wants but always finds lacking, especially when her rural childhood is replaced by a middle-class suburban marriage.

Munro’s stories, though, have elements of both the Beautiful and the Sublime in the Romantic sense: they are smooth and rough yoked together into a texture we can no longer quite name. Her characters don’t look out, like Coleridge’s on Mont Blanc and feel the dark, immeasurable terror at the core of being human. Instead, they watch their round, smooth Cousin Iris take the bus and feel that terror.

I am always tempted to argue that the short story has its own particular power and its own art, though I find it incredibly difficult to say precisely what changes when literary work is smaller. When I think about the nature of smallness as an aesthetic quality, I can’t help but think about Edmund Burke, who wrote a treatise in the 18th century about the Sublime and the Beautiful. He gave what seems in the cold light of the 21st century like a fairly ridiculous list of qualities – round things are more beautiful than squares, for instance, and smooth things more beautiful than rough – and, of course, small things more beautiful than large. Munro’s stories, though, have elements of both the Beautiful and the Sublime in the Romantic sense: they are smooth and rough yoked together into a texture we can no longer quite name. Her characters don’t look out, like Coleridge’s on Mont Blanc and feel the dark, immeasurable terror at the core of being human. Instead, they watch their round, smooth Cousin Iris take the bus and feel that terror.

The end of “Connection,” is where the bottom drops out of the world for the narrator, though it is a crisis tinged with desperate levity. Years after the unsettlingly jokey conversations about rape, Cousin Iris visits the narrator at her Vancouver home, unraveling many of the memories of the cousins’ visit that she had thought she’d understood. As it turned out, the “maiden ladies” were hammered the whole time, Winifred (the wildest of them) having secreted booze into the house in her suitcase. The narrator’s husband mocks Iris after she leaves (“What a pathetic old tart”), and then, as he’s mid-sentence, the narrator chucks a pie plate at his head. The story ends with an echo of Row, row, row, your boat, a song that begins with a family of voices and ends, always, with “the one voice alone, one of them singing on, gamely, to the finish. One voice in which there is an unexpected note of entreaty, of warning, as it hangs the five separate words on the air. Life is. Wait. But a. Now, wait. Dream.”

Claire Battershill‘s first book of short stories, Circus, will be published by McClelland & Stewart in April 2014. Stories from the collection have won a CBC Literary Award, shared a Canadian Authors Association Emerging Writer Award and been shortlisted for the inaugural PEN International New Voices Award. She has also published poetry, fiction, and reviews in such venues as The Malahat Review, The Fiddlehead, The Times Literary Supplement, and Dragnet Magazine.