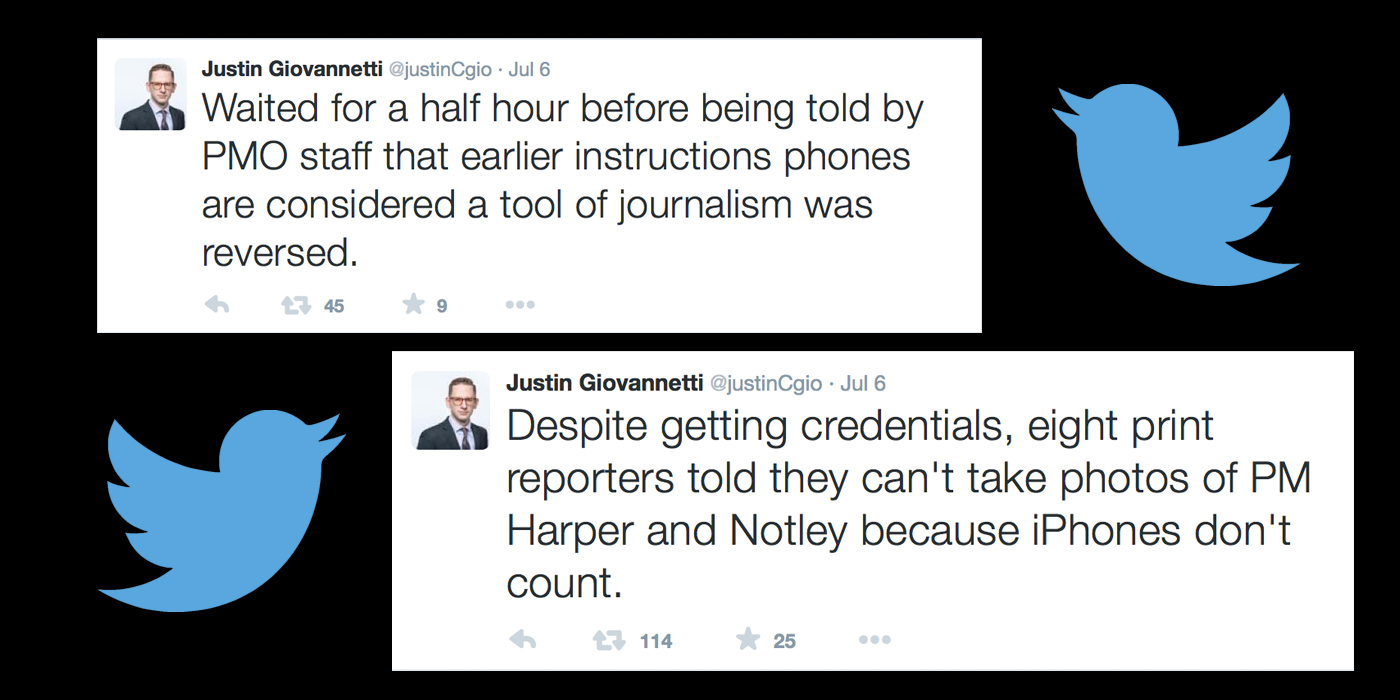 On July 6th, Globe and Mail reporter Justin Giovannetti was covering the first meeting of Prime Minister Stephen Harper and Alberta’s first NDP Premier, Rachel Notley. According to Giovannetti’s tweets, he and eight other journalists who had previously been cleared to attend a photo opportunity had their credentials refused because “iPhones don’t count.” PEN Canada believes reporters must be free from arbitrary limits on their ability to report information, especially as the tools of journalism evolve. Giovannetti was kind enough to expand on his tweets for PEN Canada in the following account.

Prime Minister Stephen Harper and Alberta’s recently elected NDP premier shook hands for the first time on the morning of July 6. The two met briefly a few days earlier at a Stampede breakfast, but according to Rachel Notley, Mr. Harper’s mouth was full and the exchange was very limited. The hand shake at 10:30 a.m. in a Calgary federal building would be the first true meeting.

The media release from the Prime Minister’s Office warned, as it often does, “Photo opportunity only (cameras and photographers only.)” However, a half hour before the appointed time about a half-dozen print reporters arrived to view the handshake.

The reporters were there to stand in the room while Canada’s Conservative prime minister and Alberta’s first New Democrat premier met for the first time, lending a sentence or two about banter and smiles to the Stampede stories being written for the following day. No suggestion was made that they would be asking questions during the photo opportunity.

At the registration desk the gathered print reporters were reminded that the event was limited to photographs, certainly no questions were allowed.The reporters told the federal staffers that they were all toting cameras: smartphones.

The reporters told the federal staffers that they were all toting cameras: smartphones.

At the time, the PMO staffer in charge of the prime minister’s media for the day said that a smartphone was OK and presented the print reporters with credentials, leading them to a conference room where other photographers and reporters were waiting.

In all, two dozen reporters and photographers waited in the conference room for about 30 minutes, as typically required before events with the prime minister. During that time there was a search of bags by the RCMP. When the moment came to go to the neighbouring room where Mr. Harper and Ms. Notley would meet, the PMO staffer in charge of media came in to escort the photographers and reporters.

“OK, time to go. Except, for the reporters with iPhones, I’ve been told that those don’t count and you’ll need to stay here,” he said. Questions were shouted at the federal staffer, but he turned around and walked away. Eight reporters, most working for local newspapers, one or two working for radio stations, stayed in the room as about a dozen cameramen and photographers left.

The exchange between Mr. Harper and Ms. Notley lasted only a few moments, enough time for a handshake. Several hours later a small story would emerge from that meeting—Ms. Notley was wearing her cowboy hat backwards. Beyond that, little description of the meeting was in a newspaper the next day.

The print reporters who were stopped from witnessing the handshake waited in the conference room, reading newspapers, writing tweets, continuing to work on their stories. Eventually, a member of Mr. Harper’s staff asked Ms. Notley’s head of media relations to walk over to the conference room and ask the reporters to leave.

The federal staffer who reversed the decision to allow in smartphones didn’t reappear and other members of Mr. Harper’s staff asked about the ban said they didn’t know what had happened. It’s unclear what happened. Members of the Parliamentary Press Gallery in Ottawa have confirmed that smartphones aren’t typically allowed into events reserved for photographers. Contrary to some suggestions, photo quality has never been cited as a reason for the ban.

The day wasn’t a wash for the print reporters present as Ms. Notley agreed to a take questions after her meeting with the prime minister. She’s since learned that there is a clear front and back to a cowboy hat.