If you had to stand behind one literary work and defend it for future generations, whose words would you choose and why? In celebration of Freedom to Read Week (February 24 – March 2), PEN Canada put this question to several Canadian writers, inviting them to consider in particular works that have been challenged, censored, or otherwise neglected by bookstores and school curricula. This is the second in a series of blogs that argue for the one novel, play, or poem that all Canadians should read.

Too Much to Bear? Appropriating the Inappropriate

We all have words that get our backs up. They may be overused techno-jargon, or the obfuscation favoured by politicians, or merely trendy nonsense. Usually, the most aggravating words are those used to cover up a more clear meaning. They are rhetorical distraction, verbal bait-and-switches. Vagueness used as a shield against honesty.

I am an enemy to the concept of “inappropriate” because it is a veiled form of an uglier term, namely censorship

Personally, I have come to abhor the word “inappropriate.” What bothers me is not the word itself – it’s been around a long time, its meaning is clear – but the context in which it too often appears. School board memos justifying the removal of a certain book from the library. The shaping and limiting of audiences. The disqualification of writers from a given competition or mainstream shelf. The prejudice against a work of art justified by one social norm trumping another through the arbitrary use of political power.

I am an enemy to the concept of “inappropriate” as here described, because it is a veiled form of an uglier – less “appropriate” – term, namely censorship. It’s why, as a reader, I’ve always been attracted to the “inappropriate,” and have always found value in books that have had that particular mud thrown at them.

Take, for example, Marian Engel’s novel, Bear. Though it won the Governor-General’s Award in 1976, and is sometimes taught in university courses, it’s a book that stands slightly outside the official national canon, acknowledged but with an asterisk. An asterisk that says “inappropriate.”

It says mysterious things about our relationship to the wild, is often funny, in a serious way, and yes, weirdly hot

But we should read Bear. Not just the scholars or specialists or historians among us, but all Canadians who might secretly suspect that our literature chooses not to go into certain places. In Bear, it goes there alright. 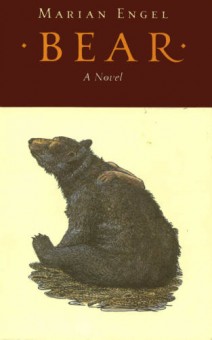 I recommend Bear, however, not because it’s a feather ruffler of a book. It should be read because it brings something to the conversation that wouldn’t be spoken if we didn’t read it, if we kept things strictly appropriate.

Bear is brave. We should be too.

View all posts by Andrew Pyper →