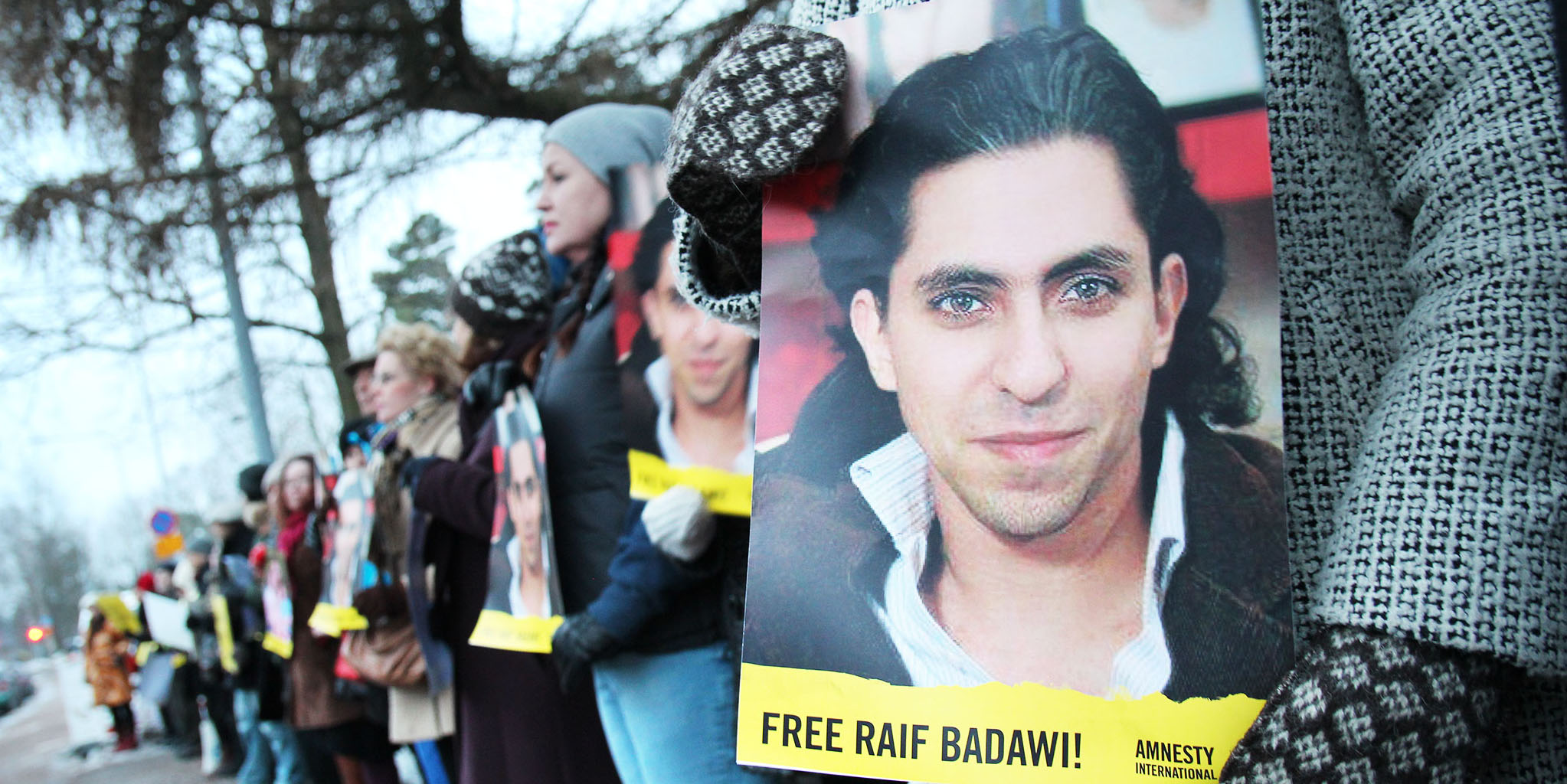 Saudi Arabian blogger Raif Badawi was arrested in June 2012 on charges of “founding a liberal website” and “insulting Islam.” He was sentenced to seven years in prison and 600 lashes, later increased to ten years and 1,000 lashes. In May 2015, reports began to surface that Saudi Arabia would bid to lead the United Nations Human Rights Council. PEN Canada president, Randy Boyagoda, reflects on the Saudi bid and how freeing Raif Badawi could impact the Kingdom’s international reputation. This piece was originally published in the Globe and Mail, July 2, 2015.

How to sway Riyadh to free Badawi

Perhaps Canada should support Saudi Arabia’s bid to assume leadership of the United Nations Human Rights Council. Why? Because, if successful, its assumption of this globally important role would let the kingdom demonstrate its commitment to human rights by freeing Raif Badawi.

Mr. Badawi, 31, is a slight, soft-spoken man, a devoted husband and the father of three. He is a founder of the Saudi Liberal Network, a website created to foster social and political debate. Mr. Badawi was arrested in June, 2012, after organizing an online conference to mark a “day of liberalism.” Convicted of “founding a liberal website,” “adopting liberal thought” and, most gravely, “insulting Islam,” he was sentenced to seven years in prison and 600 lashes.

In May, 2014, after a failed appeal, a criminal court extended his prison sentence to 10 years, increased the flogging to 1,000 lashes, and added a fine of one million riyals ($333,000) with decade-long bans on media work and travelling. On June 7, 2015, the Supreme Court confirmed the sentences. Reports suggest that Mr. Badawi may face retrial for apostasy, a capital crime.

Riyadh expressed “shock and dismay” at the criticism it faced after Mr. Badawi received 50 lashes before a cheering crowd this January.

Prime Minister Stephen Harper has condemned the treatment of Mr. Badawi. In January, Canada’s then-foreign minister John Baird expressed “deep concern” about the case. But no one in Ottawa has been foolhardy enough to say anything that might, for instance, jeopardize the $15-billion arms deal the Saudis reached with Ontario’s General Dynamics Land Systems last year.

Quebec has been more outspoken. Ensaf Haidar, Mr. Badawi’s wife, lives in Sherbrooke with the couple’s three children after fleeing Saudi Arabia in 2012. The provincial government unanimously called for Mr. Badawi’s release in February and, this month, granted him a certificate to facilitate migration to Canada.

In other words, everything seems in place to make Mr. Badawi’s release possible, not least growing evidence of a new spirit in Riyadh. King Salman seems open to the more moderate and moderating stance on domestic affairs that appeared late in the reign of his half-brother, King Abdullah. That included the shuttering of a Salafist television station after attacks against Shia worshippers in Al-Ahsa, and legislation for women to acquire their own ID cards by 2020 (rather than remain dependents of their fathers and brothers).

Media reports often emphasize the tech-savvy dimension of Saudi culture. The kingdom accounts for 10 per cent of the Middle East’s Facebook use, and more than 40 per cent of its Twitter traffic. It has the world’s highest per-capita YouTube usage. In other words, it is a place of vast virtual freedoms. Young women – who still can’t drive, legally – race cars on smartphone apps. But much of this progress feels transient or illusory: The minister who closed the TV station got sacked; the government still practises Internet filtering.

We are not romantics or idealists. We know that Riyadh may not feel the need to free Mr. Badawi as a gesture of respect for human rights or on compassionate grounds so that he can be reunited with his family. His release may seem less progressive than video games that let women drive virtual cars. So here’s another rationale: Mr. Badawi’s release would make Riyadh look better than Tehran.

Saudi Arabia’s arch-rival faces worldwide criticism for imprisoning Washington Post reporter Jason Rezaian. Does Saudi Arabia really want to look no better than Iran in the court of public opinion? If Riyadh wants to be a trusted actor, regionally and globally, Mr. Badawi’s case offers the new monarch a rare opportunity to establish his good faith, and to signal that he wishes to embrace progress, moderation and justice. All of this could be accomplished with little more than a few strokes of a pen, rather than a few hundred lashes of a whip.