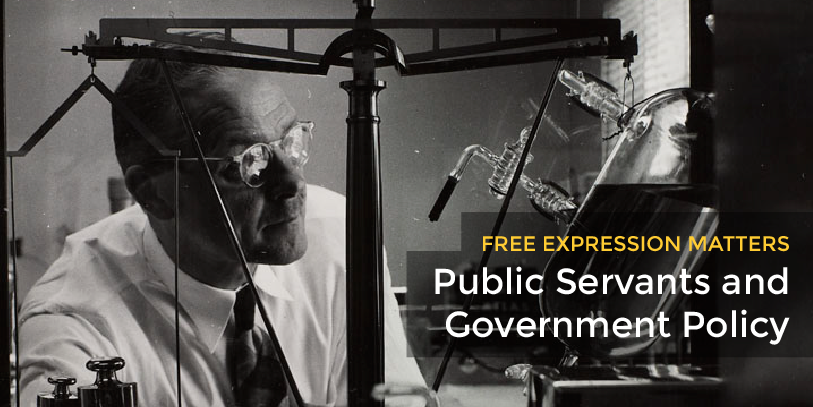 Each year, PEN International prepares a report assessing the state of freedom of expression in the country in which its congress is held. In October 2015, PEN International released a report on free expression in Canada ahead of the 81st congress in Québec City, Québec. Based on this briefing note, PEN Canada presents “Free Expression Matters” a series that breaks down free expression issues in the country. In this second installment we investigate public servants’ ability to publicly critique and/or contradict federal policy in light of new directives from Canada’s freshly elected government.

How free are federal public servants to critique and/or publicly contradict government policy?

A 2013 survey of Canadian federal scientists conducted by the Professional Institute of the Public Service of Canada found that 90 per cent of scientists felt they could not speak openly to the media, and 86 per cent felt they would face retaliation from their superiors if they spoke out about a policy they felt affected Canadians. The federal government repeatedly denied that they were interfering in the rights of public scientists. In another sector, the Code of Conduct for Library and Archives Canada (LAC), introduced in 2013, specified that only “authorized spokespersons” could respond to inquiries about the LAC’s policy positions. Employees had to obtain permission from managers for “high risk” activities such as teaching at colleges or universities, or attending and speaking at conferences.

How had federal policies made it difficult for public servants to critique and/or contradict government policy?

In the past decade, codes of conduct and communication policies for federal public servants became increasingly restrictive in Canada. The federal government’s 2006 Communications Policy introduced restrictions on how and when public sector employees can communicate with the media, and it required multiple levels of authorization before such communications could take place. Critics argued that the changes were designed to prevent the public release of information that contradicted government positions.

The new policy had far-reaching effects. In 2010, a Natural Resources Canada scientist was required to get approval from the office of the Natural Resources Minister to speak with the media about a flood that occurred in Northern Canada 13,000 years ago. The request was approved only after the reporters’ deadlines had passed and the story was no longer in the public eye. In other cases, the slow pace of the new bureaucratic approval system forced journalists to approach non-Canadian scientists for timely comment on scientific and environmental developments in Canada. Leaked documents from Environment Canada showed an 80 per cent decrease in media coverage of climate change science after the policy was implemented. These policies undermined transparency, blocked access to scientific information, and made it difficult for Canadians to assess their government’s policy decisions.

How are we doing today?

On November 6, 2015, Minister of Science, Innovation, and Economic Development, Navdeep Bains, released a statement declaring government scientists and experts free to speak about their work to the media and the public. Shortly after the announcement, scientists at the Department of Fisheries and Oceans and Environment Canada confirmed that the government had indeed communicated this policy to them, and that departmental policies would be amended to implement this change.

The president of The Professional Institute of the Public Service of Canada, Debi Daviau, cautiously celebrated the announcement in a press release stating that although the change is welcome, it should be entrenched in collective agreements in order to ensure future governments are not able to silence public sector employees.

Although these are positive steps towards a greater level of free expression, there is more to be done in order to ensure that federal public servants are free to critique government policy. Federal communication policies have yet to be formally revised to reflect this “unmuzzling” of scientists, making it relatively easy for this government or successive ones to revert back to a model where scientists are unable to speak freely to the media. Moreover, the government has yet to lift communication restrictions on other public servants such as federal librarians.