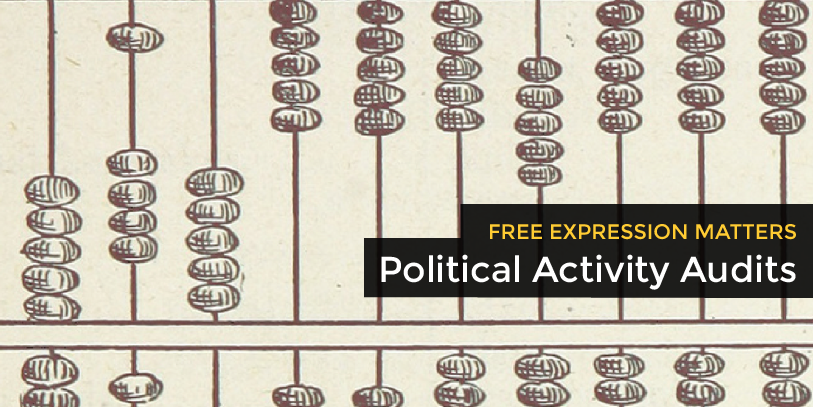 Each year, PEN International prepares a report assessing the state of freedom of expression in the country in which its congress is held. In October 2015, PEN International released a report on free expression in Canada ahead of the 81st congress in Québec City, Québec. Based on this briefing note, PEN Canada presents “Free Expression Matters” a series that breaks down free expression issues in Canada. In this third instalment we look at the Canada Revenue Agency’s audits of charities for “political activity”.

UPDATE: On January 20, 2016 Minister of National Revenue, Diane Lebouthillier, announced the winding down the political activities audit program for charities.

How does the Canada Revenue Agency interact with charities?

Charities provide valuable services to Canadians, so the government supports them with special tax privileges. Canadian charities must be registered with the Canada Revenue Agency (CRA), a government body that ensures they comply with the Income Tax Act and other legislation.

Since 2012, the Canadian federal government has allocated C$13 million to the CRA to ensure that charities spend no more than ten per cent of their resources on “political activity.” Interpreted broadly, the current definition of political activity could include any critique of government policy or interaction with political candidates.

The CRA audited sixty charities for political activity in the past four years. The first wave of audits focused on environmental charities (several of whom were vocally critical of the Alberta tar sands and pipeline development), but also included social justice and international human rights organizations. One of those organizations was PEN Canada.

We still don’t know why these sixty charities were chosen from the more than 100,000 active charities in Canada, and the CRA has refused to provide meaningful information. Coupled with their vague and easily misinterpreted definition of “political activity,” these audits have resulted in widespread suspicion that they are being used to silence dissent.

Intentions aside, CRA audits have created a chill on expression in a sector where many organizations work on behalf of our societies’ most vulnerable.

How transparent is the CRA regarding charitable audits?

These are helpful initiatives, but until the CRA clearly identifies how charities are chosen for audits and clarifies its definition of political activity, many will remain wary of critiquing government policy.

How does this impact free expression for charities?

Many charities have chosen to err on the side of caution, engaging in fewer activities that may be deemed “political” in order to avoid the risk of being audited and losing their ability to issue tax receipts to donors. None of the sixty political activity audits conducted since 2012 have resulted in the revocation of charitable status, but just the prospect of a time-consuming and resource intensive audit and/or loss of charitable status is deterrent enough.

Has the situation changed?

Canada’s newly elected federal government has pledged to make changes to the rules governing the charitable and non-profit sectors. In ministerial letters to the ministers of finance and national revenue, Prime Minister Justin Trudeau directed them to work toward clarifying the definition of “political activity” and creating a new legislative framework governing the financial responsibilities of these sectors.

How Hard is it to Get Information on Political Activity from the CRA?

CRA Caution to Canadian Mennonite May be Part of a Pattern