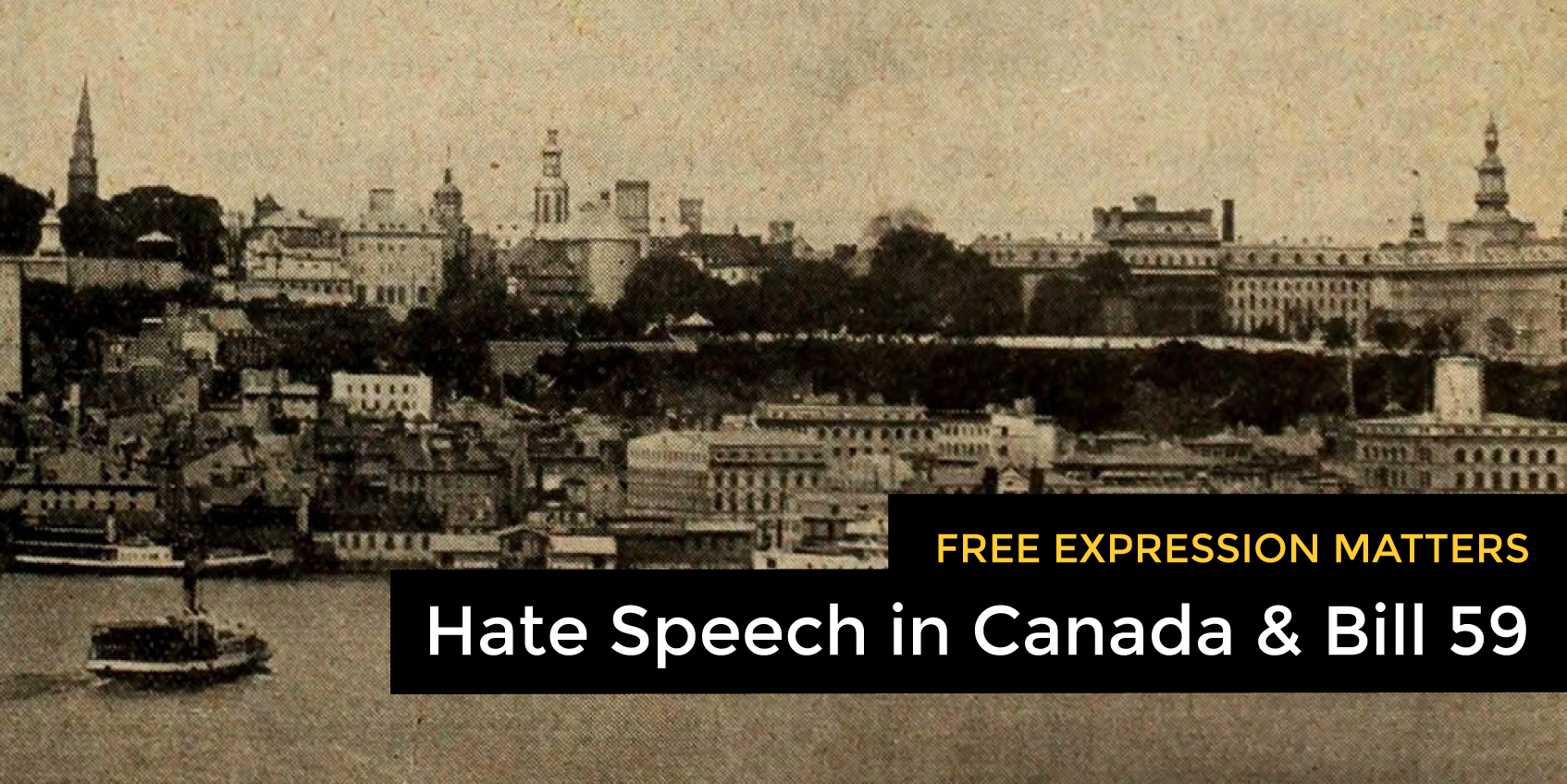 Each year, PEN International prepares a report assessing the state of freedom of expression in the country in which its congress is held. In October 2015, PEN International released a report on free expression in Canada ahead of the 81st congress in Québec City, Québec. Based on this briefing note, PEN Canada presents “Free Expression Matters” a series that breaks down free expression issues in Canada. In this fifth instalment we look at hate speech in Canada, and specifically how Québec’s proposed legislation, Bill 59, could impact free speech.

What is hate speech in Canada?

Canada has the obligation under international law to legislate against hate speech that “constitutes incitement to discrimination, hostility or violence”. Canada’s hate speech laws can be found in the Criminal Code at the federal level, and in human rights legislation at the provincial level. Criminal hate speech cases are rarely prosecuted because they have a high burden of proof and a number of admissible defences. However, hate speech laws found in human rights legislation offer fewer defences, a lower burden of proof, and fewer procedural protections. This makes it far more difficult for respondents to fight such complaints.

In 2013, the Supreme Court of Canada (SCC) decided that, in part, provincial human rights hate speech laws are a reasonable limit on the freedom of expression guaranteed in section 2b of the Canadian Charter of Rights and Freedoms. In the landmark judgment, Saskatchewan Human Rights Commission v. William Whatcott, the court determined that the key to deciding whether a given expression should be considered hate speech is to consider the effect it had on its audience, while keeping in mind the intention of reducing or eliminating discrimination. The SCC established three directives that establish how to do this:

Even with these directives, hate speech provisions are difficult to define and are open to varying interpretations. As a result, they can have a chilling effect on open dialogue and undermine free expression.

Each of the provinces and territories in Canada has human rights legislation and commissions that prohibit discrimination and provide an avenue for redress. In Québec, the recently introduced Bill 59 aims to prohibit the dissemination of hate speech and speech inciting violence.

In June 2015, the Québec government introduced Bill 59, titled “an Act to enact the Act to prevent and combat hate speech and speech inciting violence and to amend various legislative provisions to better protect individuals.” The primary purpose of the act is to create measures that prevent and combat hate speech and public speech that incites violence against a group of people based on characteristics laid out in the Québec Charter of Human Rights and Freedoms. The Québec charter prohibits discrimination against anyone on the basis of their race, colour, sex, pregnancy, sexual orientation, civil status, age, religion, political convictions, language, ethnicity, social condition, or handicap.

How does Bill 59 affect free expression?

Bill 59 poses a significant threat to free expression in Québec. Although this piece of legislation aims to combat hate speech and speech inciting violence specifically, its broad language coupled with restrictive prohibitions and significant penalties will place a chill on the expression of legitimate ideas and debate.

As stated in the above section, the bill aims to combat speech that targets individuals or groups on the grounds of discrimination identified in the Québec Charter of Human Rights and Freedoms. These grounds include what is contained in most other provincial human rights codes including age, sex, colour and pregnancy but also “political convictions.” A restriction on speech that targets individuals or groups on the basis of political conviction is a serious restriction on civil and political dialogue. While the bill expressly states that its purpose is not to prohibit the dissemination of speech intended to “legitimately inform the public,” it would nonetheless pose a very real risk to those speaking and writing on contentious political matters, creating a potential chill where civil discourse matters most.

Not only does Bill 59 prohibit citizens from engaging in or disseminating hate speech, but also from acting in a way that causes the speech to be disseminated. This language casts an alarmingly wide net. For those in heated political discussions, will the defence of “legitimately informing the public” be sufficient against an anonymous complaints to the Commission des Droits de la Personne et des Droits de la Jeunesse the bill makes possible?

Bill 59 also allows individuals to report anticipated hate speech before any expression has been made, and the Act permits the Commission to apply to court for an injunction to stop the speech from happening. This would permit the policing of future speech.

Finally, the penalties for being found guilty of an offence would present a significant deterrent to the free expression of ideas. An individual that is found guilty of disseminating hate speech under this bill can be fined between $2,000 and $20,000 and groups can be fined up to $250,000. In addition, all guilty parties will be listed on a website updated and maintained by the Commission des Droits de la Personne et des Droits de la Jeunesse. With such vague language and high consequences, it is easy to see why many may abstain from dialogue for fear of prosecution.

Reactions to Bill 59 have been mixed. Québec Premier Philippe Couillard introduced the bill along with sixty other measures aimed at combating radicalization. Initial responses questioned the effectiveness of a bill that purports to fight radicalization without using the terms religious fundamentalism or extremism. Other critics of the bill, including legislators, lawyers, and civil liberties groups, argue that the Criminal Code already prohibits the dissemination of hate speech, making the case that this bill is a duplication of those provisions and will place a chill on the free expression of ideas.

Supporters of the bill see it as a blow to hatred and intolerance. In a climate of increasing Islamophobia, representatives of AMAL-Québec—an organization dedicated to a secular Québec—believe the bill will help curb negative attitudes and stereotypes of Muslims. AMAL president Haroun Bouazzi states that the bill will help combat violent extremism by creating a more tolerant social environment. Many Muslim groups have also come out in support of the bill, with the caveat that the term “hate speech” should be defined more clearly.

Bill 59 has been adopted in principle by Québec’s National Assembly and is currently being studied in detail by the Committee on Institutions. Once the committee releases its report and the National Assembly votes to adopt it, the bill can become law.