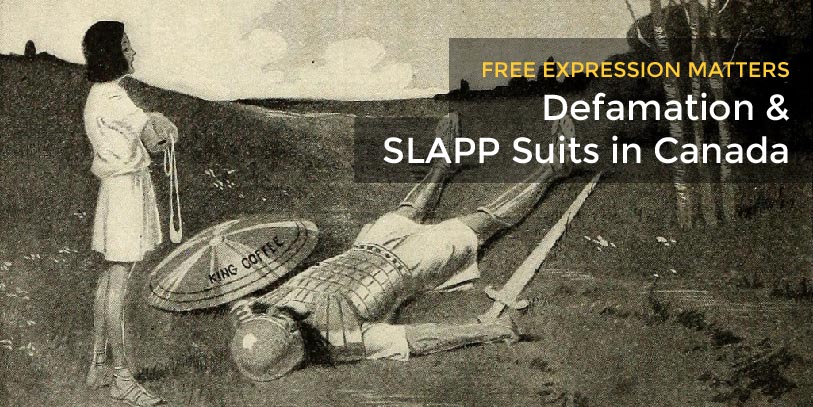 Each year, PEN International prepares a report assessing the state of freedom of expression in the country in which its congress is held. In October 2015, PEN International released a report on free expression in Canada ahead of the 81st congress in Québec City, Québec. Based on this briefing note, PEN Canada presents “Free Expression Matters” a series that breaks down free expression issues in the country. For this first installment we’re looking at defamation and SLAPP lawsuits in light of Ontario’s new Anti-SLAPP legislation.

Defamation is communication about a person or group that damages their reputation. Spoken defamation is called slander, and written defamation is called libel. In 2012, the United Nations Commission on Human Rights ruled that the criminalization of defamation violates freedom of expression and is inconsistent with Article 19 of the International Covenant on Civil and Political Rights. In Canada, defamation is still considered a criminal offense and is punishable by up to five years in prison, though almost all libel cases are pursued in civil court.

What are the defences to defamation?
Until 2009, there were four common defences used in a defamation lawsuit: truth or justification, absolute privilege, qualified privilege, and fair comment. Then, in a landmark ruling that advanced free expression, the Supreme Court of Canada (SCC) established a responsible communication defence. The responsible communication on matters of public interest defence gives journalists the right to speak on issues of public interest, provided they exercise a reasonable level of responsibility in verifying potentially defamatory facts. Unlike the other defences against defamation, responsible communication recognizes the importance of journalism that aims to protect the public interest and allows journalists to report on allegations, even if they prove ultimately not to be true, as long as the news was urgent, serious and of public importance, the journalist used reliable sources, and sufficient efforts were made to report on the other side of the story.

What are SLAPP suits? 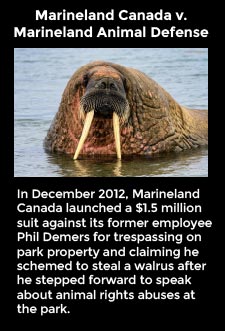 Canada’s civil defamation laws make it possible for wealthy actors to launch strategic lawsuits against public participation (SLAPP suits), also known as David vs. Goliath suits, to stifle criticism of their activities. SLAPP suits are undertaken by wealthy and powerful parties who can afford to prolong expensive legal proceedings until their opponent no longer has the resources to defend themselves. They are based on claims that have no real merit, but are specifically designed to tie up the defendants time and money with court appearances and legal fees. This makes it difficult for less powerful parties to express legitimate criticism of the corporate sector and other wealthy actors across the country.

What progress has Canada made in defending against SLAPP suits?
Only two Canadian jurisdictions (Ontario and Quebec) have adopted anti-SLAPP legislation. Both focus on enabling courts to quickly identify strategic lawsuits, and dismiss them if they are found to be frivolous.

Quebec was the first Canadian jurisdiction to enact anti-SLAPP legislation in the form of Bill 9, An Act to amend the Code of Civil Procedure to prevent improper use of the courts and promote freedom of expression and citizen participation in public debate. The Act:

Since the release of the PEN International briefing note, Ontario has enacted the Protection of Public Participation Act, 2015, which amends the “Courts of Justice Act, the Libel and Slander Act and the Statutory Powers Procedure Act in order to protect expression on matters of public interest.”1 The Act ensures that:

What is left to be done?
Ontario’s new anti-SLAPP legislation is a big step toward preventing expressive chill in Canada, as is the existing legislation in Québec. Unfortunately, powerful actors can still use SLAPP suits to quiet public criticism in the rest of Canada. That needs to change. Another top priority is to decriminalize defamation, a move that would bring Canada in line with our obligations as a signatory of the UN International Covenant on Civil and Political Rights.

PEN Canada will continue to monitor defamation and SLAPP litigation, and ask our government for better protections for our right to freedom of expression. Be sure to check out the next month’s “Free Expression Matters” to learn more about your right to free speech in Canada.