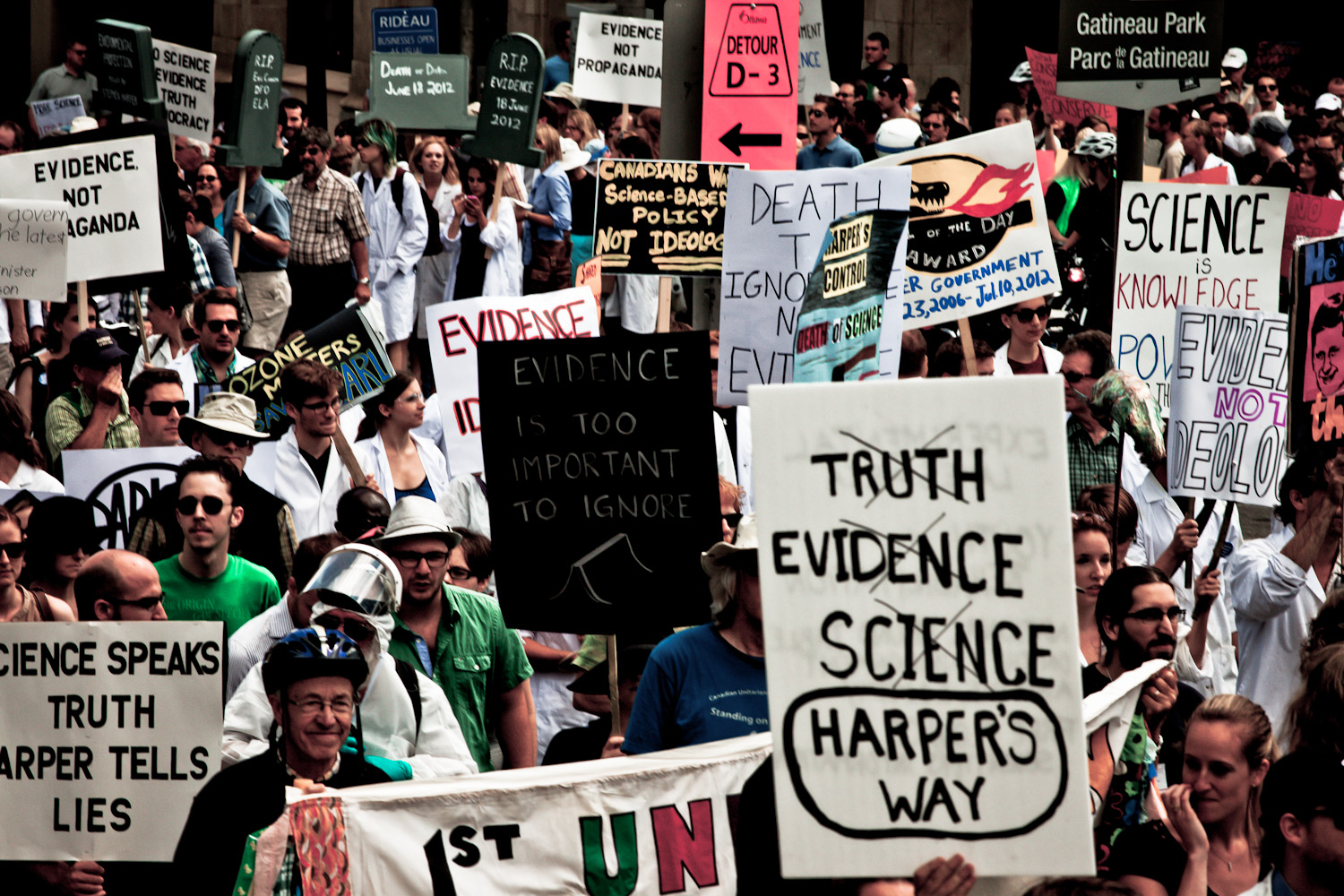 On July 9, 2012  several hundred Canadian scientists held a “death of evidence” rally in Ottawa to protest the  federal government’s continued “mistreatment” and “politicization” of scientific research in such decisions as the removal of the national science advisor, the abandonment of  the long-form census, the muzzling of publicly funded scientists, and the closure of renowned research facilities at the Experimental Lakes Area in northwest Ontario and the Polar Environment Atmospheric Research Laboratory in Nunavut.

We invited Kathryn O’Hara, Professor of Science Broadcast Journalism at Carleton University, to comment on the protest and to consider the validity of the scientists’ claims.

I followed the protest from afar. While some 2,000 Canadian scientists and supporters were protesting the “death of evidence” on Parliament Hill in Ottawa, I was flying to Dublin for the European Science Open Forum (ESOF12), a science mash up of 4,000 delegates—scientists, policy makers, journalists—and 500 speakers, spread over 5 days. In Dublin I read about the Hill protest not only in the Canadian media but in the Guardian, Huffington Post, and Nature News —proof that our government’s disdainful treatment of scientific evidence and federal scientists resonates beyond our borders.

The “death of evidence” protest is simply the culmination of  earlier warnings about program-cutting, scientist-muzzling and full-tilt, carte blanche, industrial resource development

Last week, a BBC reporter moderating a conference on science journalism called the Canadian government’s current behaviour “appalling”. Indeed it is appalling when a democratic government that pays lip service to accountability, openness and transparency creates convoluted internal policies to impede the free flow of information, uses an omnibus bill to hollow out environmental protections, and habitually dismisses scientific evidence that doesn’t fit the political plan. This should raise red flags for journalists and the watchful public. We should all pay attention.

In 2008, our scientists were among the first to formally caution Prime Minister Harper against preferring ideology over evidence when 85 of them signed an open letter calling for an end to the “politicization” and “mistreatment” of science. The Canadian Science Writers Association and the Association des Communicateurs Scientifique also tried open letters, editorials and public panel discussions like the one on unmuzzling federal scientists at this year’s annual meeting of the American Association for the Advancement of Science.

Over time the list of concerned groups has grown longer and heavier. The “death of evidence” protest is simply the culmination of these earlier warnings about what may happen if program-cutting, scientist-muzzling and full-tilt, carte blanche, industrial resource development is allowed to proceed unchallenged. The “death of evidence” rally was theatrical and caught our attention largely because scientists don’t usually turn out at protests, chant slogans or carry placards. We need more events like this. Perhaps in the next stage taxpayers, the people who ultimately fund federal scientists, will start questioning their MPs about this. After all, it is our science that is at stake.

During an ESOF session on evidence, Anne Glover, the chief scientific advisor for the European Union, said that when rigorously reviewed and publicly funded science is not used to shape policy, if it is ignored or thrown away, then the tax-paying public has a right to know why. For Prime Minister Harper, however, it has been easier to close down some of our most innovative and proven evidence generators: So Long, Experimental Lakes Area; Farewell, National Roundtable on the Environment and the Economy, Auf Wiedersehn, Polar Environment Atmospheric Research Laboratory and the First Nations Statistical Institute. And Goodnight to the long-form census, lest we forget.

Applied research investment is a positive development, but not if it cuts out the core of pure research.

In fairness, it must be said that the government is investing more in science tied to business to “grow the economy.” Applied research investment is a positive development, but not if it cuts out the core of pure research. Quite frankly data from Statistics Canada show a drop in research and development investment: Canada’s gross expenditures on R&D as a percentage of GDP fell to 1.81 in 2011, down sharply from 1.92 in 2010 and a high of 2.09 in 2001. We need more dialogue, more debate and less political bafflegab and bullying. It is heartening to see Canadian scientists hold a public protest about this, and the government will ignore these signs of discontent at its peril.

As Adam Houben, doctoral candidate in biology at the University of Ottawa said at the protest: “The current generation of students is at the forefront of the burgeoning science-and-policy debate and will be even louder in demanding for open science within a transparent government.” Wouldn’t it be wonderful to have our politicians resurrect evidence to design policy on what’s safe and healthy for our environment before it’s too late.

Governments change, evidence evolves. But how we deal with the challenges, now and in the future, calls for a spirit of cooperation among scientists, civil society and the politicians who serve us. I’m afraid that dedicating research dollars to assessing the health risks of windfarms may look sciency, but it doesn’t taste, smell or feel like a strong research question.

Kathryn O’Hara has served on federal science and technology advisory boards in health and environment, chaired health research peer-reviews and scholarships, and selected candidates for the International Space University. She is currently on the board of directors of the open access journal openmedicine.ca and on the Ethics Advisory Committee for the Science Media Centre of Canada.  As of 2001, she has been the CTV Chair in Science Broadcast Journalism at Carleton University in Ottawa.

View all posts by Kathryn O'Hara →