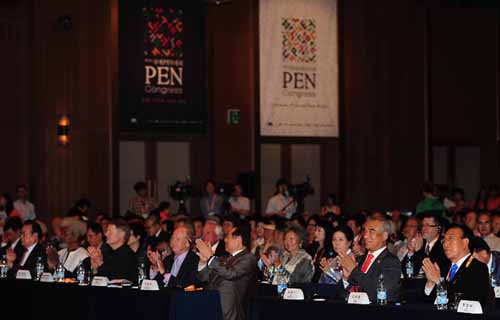 PEN International’s 78th Congress in Gyeongju, Korea brought together more than 300 delegates from 80 countries to share ideas, discuss campaigns  and focus on emerging challenges to freedom of expression. At the opening ceremony, PEN  announced its Declaration on Free Expression and Digital Technologies, which calls on governments, companies and individuals to not censor, restrict, or control the content of digital media.

At the 2012 PEN Congress in Gyeongju, South Korea, delegates would have been forgiven for staying fixated on the urgent moment. Anti-Japanese riots in China and anti-Putin protests in Russia, attacks on US embassies and consulates in Libya, Tunisia, and Egypt, even the threat of a typhoon clipping the country’s southern coast: the world was spinning at top speed the week of September 9-15, an irresistible state of agitation for the two hundred plus writers and journalists gathered in the Hyundai Hotel.

And yet, the legacy of the 78th congress may well come down to its enshrinement of two slowly crafted, thoughtful documents concerned with everything surrounding those urgencies. One is a manifesto, the other a declaration. If these terms sound too fancy, too much the variety of talk often followed by no walk, there is evidence already that PEN will progress deeper into this century on their strengths. Manifestos and declarations go from talk to walk by becoming tools to address core issues and assert fundamental values. The go ‘live’ as principles, and are thereafter plans of action, alert and responsive to circumstances.

First, the manifesto. Drafted in 2011 by the PEN Committee of Translations and Linguistic Rights, the Girona Manifesto offers a 10-point statement of belief that “the right to use and protect one’s own language must be recognized…as one of the fundamental human rights.” An elegant distillation and updating of an earlier attempt to make linguistic rights part of our mandate, the Girona offers criteria for thinking hard about how to support linguistic diversity, and why languages are not only a means of communication but “the milieu in which humans grow and cultures are built.”

Sound too celestial to be of much earthly utility? In Korea, PEN International President John Ralston Saul provided evidence of the Girona at work in its first year of existence. Last winter Saul took part in a gathering of the PEN Ural-Altay Network, a working group of 11 centres in Central Asia, in the Autonomous Republic of Crimea. Wishing to understand Crimean Tatar rights as minority language speakers, the Network used the manifesto as a guideline to both investigate the condition of Tatar, and then to recommend ways to further protect it. Delegates passed a resolution asking the Ukrainian government to do that very thing.

In Gyeongju PEN produced another essential working tool. The ‘Declaration on Free Expression and Digital Technologies’ comes not a moment too soon in the anarchic, ethically-challenged expansion of the Net. Like it or not, the Internet is the new Speaker’s Corner, the new Forum, where ideas and opinions are aired with unprecedented speed and often alarming consequence. The Net, too, is where quaint 20th century notions of privacy – of the doors that states have no business walking through into the lives of individuals – expire. It is a thrilling, disturbing, careening phenomenon, and PEN was overdue to weigh in on its nature and impact, in particular – as per our role as a freedom of expression organization – its easy embrace of surveillance as the ‘cost’ of being a Netizen.

The Declaration is a clear and powerful expression of where PEN stands on one dimension of our brave new world. (So vast are the implications of a planet gone digital, the drafters of the document decided that core writerly issues of intellectual and creative property rights would have to wait for a further date to be addressed.) Its four declarations are indeed all about rights in cyberspace. People have the right to “express themselves freely through digital media without fear of reprisal or persecution.” They also have the right to “seek and receive information through digital media.” Users of the Net have the right to “be free from government surveillance,” and the private sector are “bound by the right to freedom of expression” to *not* become a party to state surveillance and coercion. The declaration goes so far as to demand that private companies “provide restitution to those whose rights were violated” – fighting words in our corporatized times.

PEN’s Declaration on Free Expression and Digital Technologies’ comes not a moment too soon in the anarchic, ethically-challenged expansion of the Net

The Net, PEN asserts, is not a zone of legal or ethical exception. Regardless of how easy it is to access private information, to spy and survey, to harass and shut down, and regardless even of how many users of technology appear to be sleepily signing over their basic rights in exchange for a bigger, faster, cooler Digital Commons, the same rules of conduct, and the same laws, must apply. They don’t generally apply, of course, and the rapidity of the digitization of everything is precluding a rational, measured conversation about where we are heading. But still, as citizens and writers PEN must first sort out what our organization believes about freedom of expression and digital technologies, and then apply those beliefs on a case by case basis.

Like the Girona Manifesto, the Gyeongju Declaration, as the document is likely to be known, gives PEN a vocabulary, and a statement of principles, on which to base our interventions on behalf of individuals arrested or silenced for expressing themselves digitally, and the principle itself. Only a few days old, the declaration has already gone “live,” and is ready to be put to good, urgent use.

Charlie Foran is the current president of PEN Canada. He is the author of 10 books, including the Charles Taylor Prize-winning book, Mordecai, a biography of Mordecai Richler, and the novels Carolan’s Farewell and House on Fire.

View all posts by Charlie Foran →