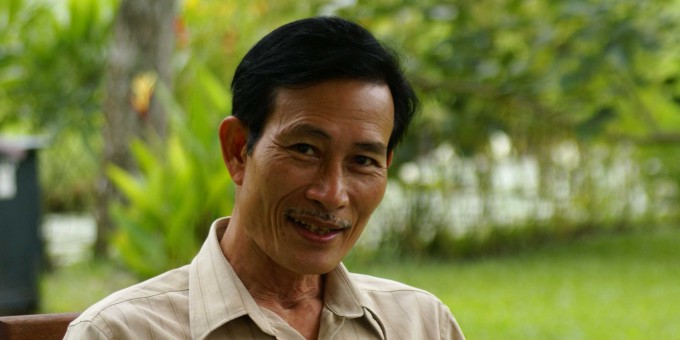 Vietnamese blogger and One Humanity Award winner, Nguyễn Văn Hải, was released from prison on October 21, 2014. Better known by his pen name “Dieu Cay,” Hải served six and a half years of a twelve year sentence for “conducting propaganda against the state.” He was immediately forced into exile in the United States, where he described his first days as “too comfy, too warm, and too bright.” We caught up with Hải to see how he is settling in to his life in California. Graciously translated by Christine Dang.

Five questions for Dieu Cay one year after his release

PEN Canada: When we last heard from you, just after your release, you were still getting used to life in California. Almost a year later, how have you adjusted to freedom?

Dieu Cay: Nine months have gone by indeed. With much help and support from close friends, I gradually integrate into my new life in this land of freedom.

My friends have helped me to find a stable place to live, and to continue with my plans and goals that I brought with me from prison. I have been able to meet and interact on several occasions with the community abroad, media organizations, and international human rights agencies. This year, on our Vietnamese traditional lunar new year, I passed my driving test, and got my driver’s license. On September 15, 2015 I started my English as second language class. There are still many other things I need to get done, such as my immigration papers, but the most important thing that I dedicate most of my time to right now is to advocate for those who are left behind in Vietnam.

the most important thing that I dedicate most of my time to right now is to advocate for those who are left behind in Vietnam.

PC: What are the challenges of living in exile? How have you kept in touch with Vietnam?

DC: Released from prison and thrown into a new life in exile, there are so many challenges that I have to face: a language barrier, cultural differences, and the lifestyle in a fast-paced industrial environment. There are different opinions and judgment, even suspicion, from certain groups and individuals within the Vietnamese community who left Vietnam prior to the first wave of refugees in 1975. However, there are still so many more great friends and supporters in the community who have been helping me through numerous life obstacles. They are always concerned with our homeland’s welfare, and support me in my work for the democracy movement in Vietnam.

I remain in close contact with friends in Vietnam, and I’m trying to bridge the gaps by passing on their voices to policy makers, parliamentary members, members of the U.S. senate, and international human rights organizations in order to seek support for other prisoners of conscience in Vietnam.

PC: Since your release you have been an ardent advocate for Ta Phong Tan*,  your former cellmate. We know she held a hunger strike in May, 2015. What do you know about her current situation?

DC: From the moment I was released from prison and arrived in the States, I have made several trips to meet with U.S. senators, members of the State Department, and human rights organizations such as the Committee to Protect Journalists and Amnesty International. Jointly we have launched urgent calls and campaigns urging the Vietnamese government to release Ta Phong Tan. The international community has voiced its concern and successfully pressured the Vietnamese authorities to release her from solitary cell and she has ended her hunger strike.  She’s still not fully recovered her strength after several hunger strikes, and now suffering from arthritis pains and pulmonary illness.  Nevertheless, her spirits were quite high when she learned that we have not forgotten her. She sent her appreciation to thank all friends, supporters and international human rights organizations who have been advocating for her and other prisoners’ freedom.

*Ta Phong was released into exile on September 19th.

PC: You yourself have been on hunger strike twice. Can you describe the
experience?

DC: Nobody knows what his first hunger strike will be like. My first time going on a hunger strike was February 4, 2011, and it lasted 28 days. I decided to strike because I was being denied the right to make contact with my lawyer, and other basic rights as stipulated in current laws. For example, my family was not notified of where I was being imprisoned, and officials misled my family to go on trips to visit me at a different prison (Prison camp PA 24 while I was being held at Prison B34).  Further, the prison wardens deprived me of my right to appeal by not providing me with paper and pen to complete an appeal application, and not sending my appeal to the higher authorities. When I was on my 28th day of hunger strike (March 6, 2011), they tried to force me to drink a few sips, but my body rejected it and I peed blood. They had no other choice but to take me to the emergency room at the 30/4 hospital in Saigon. After 2 days of treatment, they returned me to B34 Prison.

Nobody knows what his first hunger strike will be like.

The second time I went on a hunger strike was at Prison Camp 6 which is under the control of the Ministry of Public Security. This second round I lasted 33 days. I had represented other prisoners and signed a mass grievance against the deprivation of rights to which criminal prisoners were entitled: the right to study, to learn a trade, to be informed, to read newspapers and books, to participate in social and sports activities. Because of this grievance on behalf of other fellow prisoners, the authorities ordered me to solitary confinement for 3 months, isolating me from other prisoners. I decided to go on a hunger strike to request the Review Board to come to the prison and resolve our grievances. When I was on my 25th day of hunger strike, another prisoner, Nguyen Xuan Nghia, who is a writer and poet, courageously found a creative way to send words to the outside world through his wife when she visited him. However, the authorities still did not resolve our grievances, and the Review Board did not come to our prison camp to meet with us until the 33rd day of  my hunger strike.  When they came, they finally allowed me to be out of solitary confinement, and back to my cell.

During both of my hunger strikes, the authorities did not care to take any action until I was near death, and even then they hesitantly intervened.

The sole lesson I learned from these strikes is that in a communist prison, whoever wants to use his or her own life as a weapon to fight, he or she must prepare to last as long as it takes, and must find ways to inform the outside world. This I learned the hard way: during my first hunger strike, I couldn’t send words out to the outside world. I only ended up in the emergency room, far from reaching a real resolution.

PC: You have spoken of your responsibility to speak for those who are still imprisoned. Since your release you have rekindled the Free Journalists Club, talked with U.S. President, Barack Obama, and testified in front of a U.S. congressional hearing. How has this helped?

DC: My own personal situation is a testimony of how it has helped.

After my imprisonment, the international community received news via the media. They voiced their concerns and applied diplomatic pressure on the Vietnamese government for my release. The governments of various countries, especially the U.S. State Department and President Obama, played a pivotal role in my newfound freedom as well as some of my compatriots’.

My freedom sends a positive message to friends back home and members of the democracy movement in Vietnam. My friends understand that they are not alone in this struggle, and continue to hold firm their unbeatable beliefs for our cause despite their prison terms.

My friends understand that they are not alone in this struggle, and continue to hold firm their unbeatable beliefs for our cause despite their prison terms.

From my own personal experiences, I understand my friends in prison and know what I need to do for them. Therefore as soon as I had the opportunity, I revived the Free Journalist Club, and joined efforts to advocate for their release.

We actively circulate news and information that we receive from home to the international community and the U.S government officials urging them to call on Vietnamese authorities to release my fellow prisoners of conscience. In the past 10 months, I went to Washington D.C. four times, and to New York four times to meet with the U.S. Senators, U.S. congressmen, United Nations officials, President Obama, and international human rights organizations–namely the Committee to Protect Journalists, Amnesty International, and Freedom House.

A very special experience that I’d like to recount here happened in early 2009 when I was imprisoned in Cai Tau-Ca Mau prison camp. A fellow prisoner got hold of a state-controlled newspaper while doing hard labour outside of the camp, and in it there were two pages written about PEN International’s world-wide campaign. One-hundred forty-five PEN centres had jointly signed an open letter urging the Vietnamese government to release me immediately and unconditionally. This news brought so much encouragement not only to me, but to all my fellow cell mates.

One-hundred forty-five PEN centres had jointly signed an open letter urging the Vietnamese government to release me immediately and unconditionally. This news brought so much encouragement not only to me, but to all my fellow cell mates.

Not only I, a prisoner of conscience, but all criminal prisoners wish that their voices, and their rights as human beings receive the attention and concern of international human rights organizations. These prisoners asked me to voice their sufferings in cruel prison conditions of Vietnam, and they have helped me get information and news about human rights abuses in Ca Mau prison camp to the outside world. Because of their help and efforts in getting information on the internet and social media through their family visits, the authorities had to drill two more water outlets to provide more water to the prison camp.

From that moment on, we realized that if we have the community’s concerns and an effective way to disseminate information, we can fight against injustice right from our prison cells.